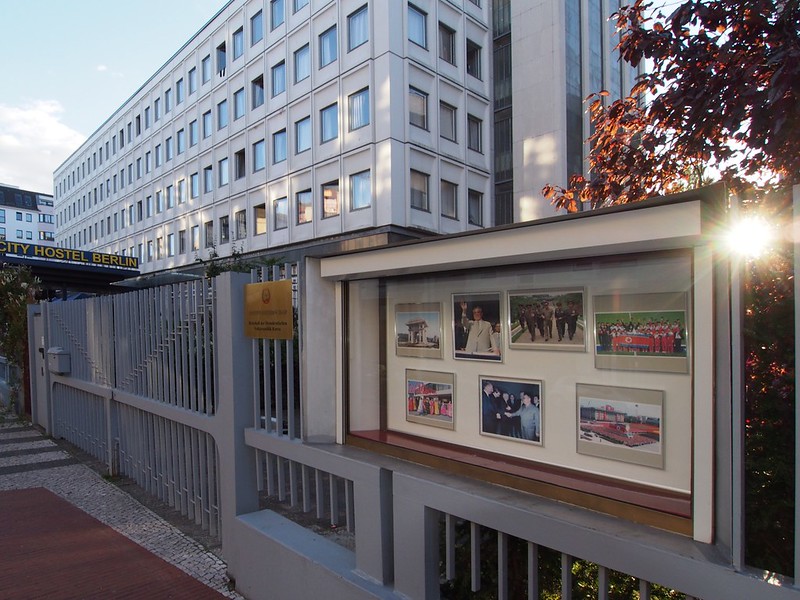 When your landlord is North Korea

Within the jurisdiction of Bezirksamt Mitte lies a peculiar institution: The “City Hostel Berlin“, a popular escape for backpackers that attracts tourists for its central location in the heart of the capital, close to many major sights. The hostel is run by a private corporation not affiliated to its famous neighbor: The Embassy of the Democratic People’s Republic of North Korea (DPRK).

A few years ago, questions were raised as to the legality of operations of the hostel. The Foreign Ministry of the Federal Republic of Germany and Bezirksamt Mitte discovered that the building used by the hostel belongs to the adjacent lying complex and is property of the DPRK. As landlord, the socialist state regularly collected rent from its tenant – a reliable source of foreign currency for the DPRK, but in the view of many a flagrant violation of applicable sanctions against the DPRK.

After the DPRK conducted a nuclear weapons test on 9 October 2006, the Security Council introduced a wide range of restrictive measures through Security Council Resolution 1718 (2006) and a series of ensuing resolutions, in which it determined that a “clear threat to international peace and security” exists. The EU implemented these measures through Regulation (EU) 2017/1509, which prohibits “to engage in any activity linked to the use of real property that persons, entities or bodies of the Government of the DPRK own, lease or are otherwise entitled to use” in Art. 20(1)(c).

And thus local government did what local government does: In May 2018 it issued an administrative order to the private corporation operating the hostel. According to the order, the addressee was in direct violation of Regulation (EU) 2017/1509 and must seize the operation of the hostel and any further use of the property insofar as the property belongs to the DPRK.

The order’s addressee, the hostel’s owners, disagreed and ultimately instituted court proceedings aiming to revoke the authority’s order. It argued that the rental agreement between the DPRK and the hostel was terminated in 2017 and that since then no payments were provided to the DPRK as landlord of the property. The mere gratuitous use of the building may not be construed as violating applicable sanctions. The hostel’s owner further argued that the decision to forcefully close the hostel was politically motivated and arbitrary.

In a textbook judgement the administrative first instance court not only confirmed the legality of the order, but illustrated how a political Security Council Resolution finds local enforcement:

According to Article 4(3) of the Treaty of the European Union (TEU) and Article 291 of the Treaty on the Functioning of the European Union (TFEU), it is the Member States’ responsibility to ensure implementation of general EU law. This responsibility exists regardless of where EU law finds its basis: It is common for EU sanctions law to be based on “political” decisions of the Security Council, if restrictive measures are adopted to safeguard international peace and security. EU Member States are bound by the decisions of the Security Council and must implement them within their jurisdiction. Because sanctions govern the interruption or reduction of economic or financial relations to a third country, they regularly impact the European Single Market and customs law. The EU has legislative power in both these areas, which is why according to Article 215 TFEU the question of introducing or implementing sanctions against a third country is purview of the EU.

EU Member States then enforce these sanctions on a national level. In the Federal Republic of Germany, there is no general provision that delegates the responsibility to enforce sanctions law to the federal government. According to Article 30 of Germany’s Basic Law (Grundgesetz) it was ultimately the State of Berlin, acting through its local authority of Bezirksamt Mitte, who had to enforce EU sanctions law in its district.

The Bezirksamt resorted to Section 17(1) of the General Security and Public Order Act of Berlin (Allgemeines Sicherheits- und Ordnungsgesetz Berlin, ASOG) to enforce EU sanctions law within its jurisdiction. The law warrants the local enforcement of measures to protect public safety and the public order. Part of the public safety is compliance with the general legal order. In its judgment, the court emphasized that EU law directly applicable in Member States, such as regulations, forms part of the general legal order. The Bezirksamt was thereby permitted to undertake measures to restore compliance with EU law.

The order prohibits the addressee from undertaking any actions with regard to the usage of the building in which it operates the hostel. This rather extensive prohibition is based on the wording of Art. 20(1)(c) of Regulation (EU) 2017/1509 and is, according to the court, neither unlawful nor arbitrary. The court stresses that the extensive prohibition and its basis in Art. 20(1)(c) of Regulation (EU) 2017/1509 serve the purpose to wholly encompass any and all activities the addressee undertakes within the building and is not limited to the operation of the hostel. The essence of the order therefore also prohibits any further use of the building by the addressee, even if she seizes operation of the hostel (e.g. use as an office building, storage, etc).

The court went on to explain why the order prohibits activities within the building “to the extent to which it is property of the DPRK”. The case took an interesting turn when the property rights of the area were unraveled: Although the building in question is property of the DPRK, it does not own the ground beneath it. The plot is owned by the Federal Republic of Germany due to an agreement between the DPRK and the former German Democratic Republic (Deutsche Demokratische Republik, GDR). The agreement awarded property rights to the DPRK only for the plot (and building) of its embassy and, separately, for the building in question without ceding the rights to the corresponding plot. This unorthodox separation of plot and building is a relic of socialist land distribution conducted by the GDR. As legal successor of the GDR, the Federal Republic of Germany became owner of the plot, but the building remained property of the DPRK.

The court saw no merit in the addressee’s contention that ever since the purported termination of the rental agreement in 2017 no payments were provided to the DPRK. Even if such payments were not provided – which the court doubted – the hostel would still have to close. The court saw no evidence that the wording of Art. 20(1)(c) of Regulation (EU) 2017/1509 is limited to financial transactions or the exchange of services. The underlying Security Council Resolution 1718 (2006) was enacted against the DPRK as a response to its testing of nuclear weapons, which amount to a threat of world peace and international security. It called upon UN Member States to tighten its restrictive measures against the regime. The court interpreted the resolution to encompass a wide range of restrictive measures and rejected the argument that the resolution was limited to the prohibition of providing financial resources for the development of the DPRK’s nuclear program. Regulation (EU) 2017/1509 was interpreted in the same way. Utimately, the Bezirksamt’s order executes Security Council Resolution 1718 (2006) by enforcing its implementation act, Regulation (EU) 2017/1509.

The court also saw no alternative to the order of prohibition. It acknowledged the Bezirksamt’s obligation to prohibit any use of the building, since less severe measures (such as limiting use to certain commercial activities or prohibiting only financial transactions with the DPRK) would not honor applicable EU law. The effective implementation of EU law (effet utile) required the Bezirksamt to take all measures at its disposal to guarantee compliance with Regulation (EU) 2017/1509.

The decision by the German administrative first instance court is a landmark judgment and an exemplary application of applicable international, EU and domestic law. The operation of the hostel had been a violation of EU sanctions law and irreconcilable with Security Council Resolution 1718 (2006) for a long time. Its closure – although surely to the detriment of many tourists – serves the higher purpose of restricting the DPRK’s commercial activities in order to peacefully force it back into compliance with international law.

The judgment and the ensuing seizure of operations of the hostel will surely not by itself transform DPRK foreign policy. However, for execution of international sanctions against sates to effectively function, enforcement must occur wherever violations take place. The administrative order against the “City Hostel” and the following judgement form part of the global plight to ensure enforcement of a conclusive international sanctions regime.

Max Jürgens is an attorney at Noerr LLP and a Phd candidate focusing on questions of state responsibility and attribution.