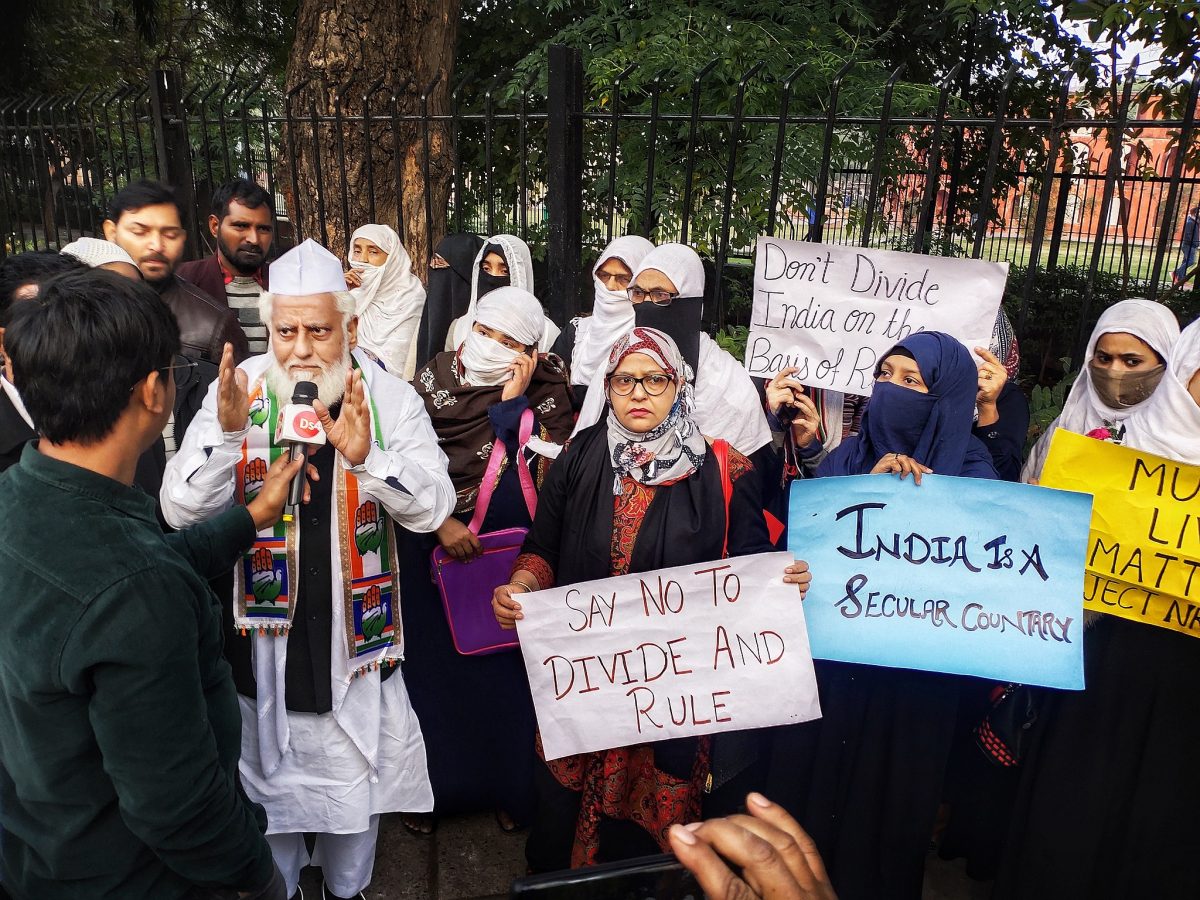 It is a common assumption that Constitutional courts in a democracy perform the role of protecting citizens’ rights against arbitrary use of government power. This is an important limb of the study of courts and judicial independence – that courts remain, in a healthy democracy, the institutions where the citizens can safely seek redressal for their grievances against the state when all else fails. However, looking at events the world over, it is undeniable that the existence of a strong court in a democracy can go either way. Strong evidence of this can be found in the current political climate of India, where the passing of the controversial Citizenship Amendment Bill, (now the Citizenship Amendment Act or ‘CAA’) led to mass protests across India – with citizens agitating against a government trying to divide the nation on religious grounds. Under this Act, the Central Government claims to provide citizenship to refugees from other countries surrounding India, on the grounds that these individuals do not get sufficient protection in their countries of domicile. What the Government has time and again failed to explain, is the exclusion of Muslims under the CAA.

In March 2020, the Government of India filed its response to the constitutional challenge to CAA, stating that the law does not violate any moral or equality provisions under the Indian Constitution. Further, the Government justified the exclusion of Muslims (amongst other communities) stating that it could not be responsible for every persecuted community. However, in addition to the academic questions of the Constitutional validity of the legislation, it is equally important to note the problematic government response to the protests surrounding the CAA – in silencing dissenting voices and perpetuating religious divides in the country. Equally concerning is the Indian Courts’ lack of reaction to the same.

The Government has sought to defend the law on the grounds that Muslims have adequate protection from the countries under the CAA whereas these other communities do not. The Act, however, ignores the possibility of other divisions and issues on the basis of which people may be fleeing their resident country, such as gender-based violence, poverty, climate change. The Act is exclusionary, and its implementation, left entirely to the discretion of the executive government, can be misused to create further discrimination on religious lines. The surrounding hate speech and statements made against the Muslim Community in India, often by leaders in the Government, certainly raises concern about what such a law would mean for the secularism and diversity that India prides itself for.

Independent news sources and NGOs have compiled evidence showing acts of police brutality, also towards students in educational institutions. Universities holding peaceful protests became centres of attacks against students, with proof of the violence being initiated by right-wing factions, such as in the attack on Jawaharlal Nehru University. Almost every day, new evidence emerges indicating right-wing involvement in the Pogrom in North East Delhi, with no action taken against the perpetrators. International Human Rights’ Organisations have also compiled evidence and reported on the mass human-rights violations in India. As a result, concerned nations have also appealed to the Government to withdraw the Act for being discriminatory and creating a culture of fear and hostility against the Muslim community (such as the resolution adopted by the EU Parliament); but to no end.

International law concerns and the CAA

For these ‘foreigners’ created under the Act, the Government plans to set up detention centres in addition to the ones that already exist. The existing centres have abysmal conditions for the individuals detained there – they lack hygiene and medical facilities, which is now a danger also due to the spread of COVID-19. These detention centres violate the guidelines set for the detention for international asylum seekers by the UN High Commissioner for Refugees. Under Guideline 6, indefinite detention is arbitrary and maximum periods of detention should be established by law. Following a Supreme Court order, the Guwahati High Court ordered that those in detention for more than two years should be released, but this order was limited to the state of Assam. The Supreme Court has not effectively addressed the issue of the detention centres set up in other states, as well as the displacement of persons that has already started in different parts of the country.

The implementation of the Act could lead to alienation of many Muslims, as well as individuals not possessing adequate documentation, who cannot prove their statehood. China has expressed concerns that such migration patterns could cause increased tensions at the borders between India and China, particularly in the Xinjiang region. While the Government justifies this legislation on the basis of providing refuge to communities that are unable to get statehood elsewhere in the countries listed, it also has no reasonable explanation for excluding Muslims. This exclusion also effectively blocks the members of the Rohingya community, that are facing ethnic cleansing, from seeking refuge in the Indian territory. In doing so, India is clearly violating its obligations under international law under the UNHCR and the ICCPR.

The United Nations High Commissioner for Human Rights has requested to be made a party to the constitutional challenge to the law in the Supreme Court of India and expressed her concern over its arbitrariness. Unfortunately, there is a limited justiciability for the actions of the Indian Government under International Law. Under India’s dualist regime, a violation of the provisions of the ICCPR is impossible unless there is a domestic law in India implementing those rights. India is not a signatory to the Optional First Protocol under the ICCPR, which rules out the individual complaint mechanism. India needs a Refugee Law which addresses these concerns clearly, rather than a law that is arbitrary and can be misused to create religious divisions.

Involvement of High Courts of States in India

Some relief emerged in the form of High Courts taking action protecting the protestors: for instance, the High Court of Uttar Pradesh ordering the state government to remove posters showing individuals ‘accused’ in the CAA-NRC protests, in order to protect the privacy of citizens. The Karnataka High Court also stepped up, granting bail to detained protestors. The actions of the Central as well as many state governments are arbitrary and without legal basis – one for instance being the attachment of property of “accused” protestors, without there being any proof of their involvement in instigation of the violence. Further, detainment of peaceful protestors is clearly a violation of right to peaceful protest, a fact only the Karnataka High Court chose to recognise. However, these actions of the High Courts are not enough – this legislation threatens to further the already existing religious tensions in India – along with it being discriminatory and arbitrary under the Indian Constitution. In such a case, it is but usual to expect the Apex Court to step in, especially when human rights and civil liberties are at stake. With such resounding support from the International community for the Muslim community in India and their concerns about the law, it is surprising that the Courts in India itself stay silent on the issue.

Public faith in the Indian Judiciary

Moin Cheema has written about courts often being complicit in providing a cloak of legitimacy to the actions of an authoritarian government, which seems to be the case in India considering the current state of things. The Supreme Court in India has been under pressure from the Government on several occasions, particularly under the Indira Gandhi Government when the bench was sought to be populated with judges who were ‘politically favourable’. It is not unusual for governments to control the composition of the judiciary in order to strengthen their control over law and policy – in Poland, the current Government in power has been attempting to drastically change the law and procedure on judicial appointments, to ensure that judges who are in line with the government’s political goals are appointed. While India remains one of the rare cases in the world where members of the higher judiciary are appointed exclusively by existing judges, it must be kept in mind that this does not ensure the independence of the judiciary.

Academic literature on the Indian Supreme Court has often described it as an activist one, stepping in when citizens’ rights are violated. While the Court has delivered progressive judgments, for instance recognising the right to privacy, and decriminalising homosexuality, the Court’s silence on the violence against citizens, is chilling. Citizens across the country have stepped up in a time when India’s democracy is under threat, a shining example being the community of women that sat down to protest in Delhi’s Shaheen Bagh, which, before the onset of COVID-19, had turned into a flourishing space for people of all communities to gather and express peacefully their grievances with the Act.

Members of civil society, including leaders of states in India, speak out about the arbitrariness of the classification under the Act as well as the hypocrisy of the government in not checking the right-wing elements causing unrest. A beacon of hope has been some retired members of India’s judiciary, who courageously stepped in to examine in particular the aftermaths of the Delhi Pogrom, concluding that it was a clear case of communal violence against the Muslim community. However, with the uncertainty of a global pandemic in the background, another disturbing development in India is the arrest and silencing of activists who speak against the Government or publicly question government policy. It is clear that public faith in the Judiciary is being eroded at a time when it was expected to step up to protect citizens’ rights.

Medha Srivastava is a PhD Student and Researcher at Humboldt University Berlin holding the GSSP-DAAD Scholarship for Doctoral Studies 2018-21. Medha graduated the BCL at the University of Oxford in 2014, after which she worked as an Advocate in the Supreme Court of India in the areas of Constitutional and Administrative Law, and Arbitration. She has also worked as a Research Fellow at the Vidhi Centre of Legal Policy in the area of Judicial Reforms.