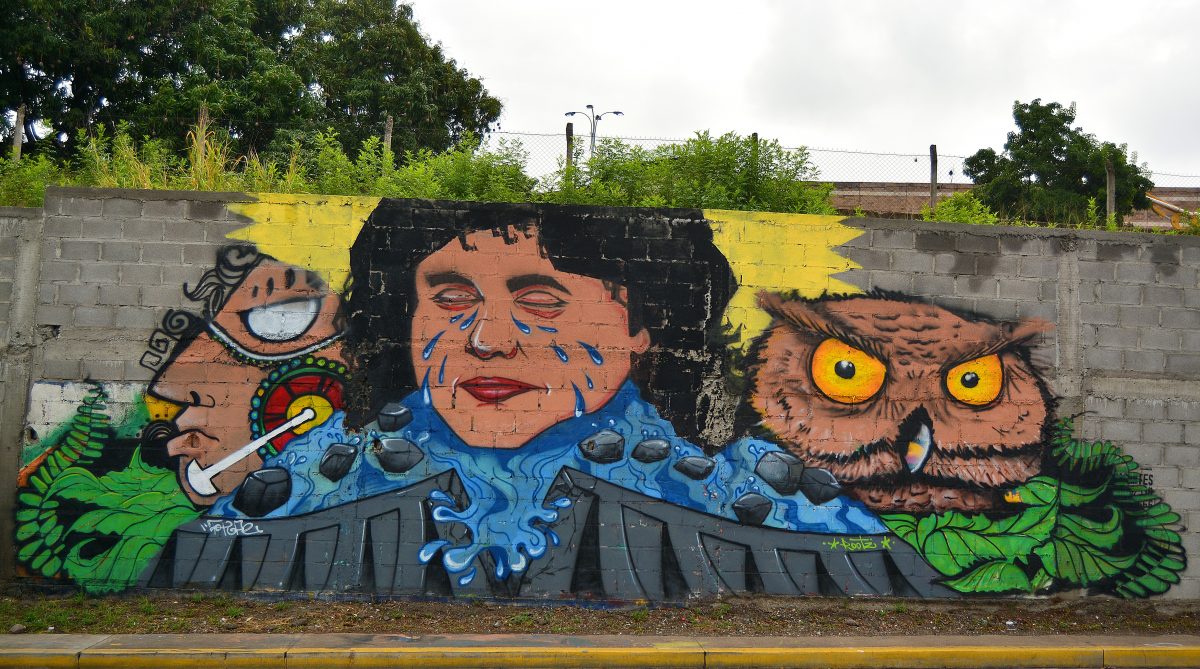 On 3 March 2016 Honduran indigenous activist Berta Cáceres was assassinated. She was a coordinator of the Council of Popular and Indigenous Organizations of Honduras (COPINH) and one of the leading voices in her people’s fight against Agua Zarca Dam at the Río Gualcarque. Her activism had earned her the Goldman Environmental Prize and years of threats and intimidations by state and non-state actors, which led to the Inter-American Commission on Human Rights issuing cautionary measures for her protection.

Her death put the issue of the dangers of environmental defense work on the agenda of a broader public. And while her murder and the following investigation attracted an unprecedented attention by the international community, the problem itself seems to be systemic. According to the London-based NGO Global Witness 197 land and environmental defenders were killed because of their activism in 2017, with 60% of these murders taking place in Latin America. The context of these killings range from resistance against illegal logging of ancient forests in Mexico, fights against mining operations in Colombia or the displacement of communities in order to clear land for palm oil businesses in Peru.

A regional treaty for environmental defenders

Against this backdrop, the signing of a legally binding regional pact to protect land defenders called Latin American and Caribbean Declaration on Principle 10 (LAC-P10) by 24 countries of the region almost to the day two years after the assassination of Berta Cáceres was met with relieve and high expectations. Amnesty International called it a “major victory for environmental human rights defenders in the region” and an “unprecedented example for the whole world to follow”. John Knox, the United Nations Special Rapporteur on human rights and the environment qualifies the agreement as “one of the most important human rights agreements and one of the most important environmental agreements of the last twenty years”. The treaty, which was stewarded by Chile, Costa Rica and Panama, went through a lengthy and at times difficult negotiation process, which was accompanied by massive civil society involvement and an upsurge in reporting on the issue by international media.

Analysis of the agreement

The regional pact is based on Principle 10 of the 1992 Rio Declaration on Environment and Development, also known as the Environmental Democracy Principle, which states that “[e]nvironmental issues are best handled with the participation of all concerned citizens”. It emphasizes the rights of citizens to access public information concerning environmental issues and to participate in decision making processes which affect their environment. Lastly, it states that “[e]ffective access to judicial and administrative proceedings, including redress and remedy, shall be provided”. Accordingly, LAC-P10 is built upon three fundamental pillars: (1) Access to Public Participation, (2) Access to Information, and (3) Access to Justice.

After stating the objective (Article 1), defining some basic terms (Article 2) and naming the guiding principles of the agreement (Article 3), the pact extensively outlines the general obligations of the contracting parties (Article 4). Inter alia, parties are obliged to “guarantee the right of every person to live in a healthy environment and any other universally-recognized human right related to the present Agreement”; “adopt the necessary measures […] to guarantee the implementation […] of the present Agreement” or “to adopt the most favorable interpretation for the full enjoyment of and respect for the rights of access to information, participation and justice in environmental matters”. Subsequently the treaty lays out extensive norms for access to and dissemination of environmental information (Articles 5 and 6), public participation in environmental decision-making (Article 7) and access to justice in environmental matters (Article 8). These paragraphs are rich in detail and give very specific guidance to States on how the objective of the Agreement is to be reached in practice. Article 9 additionally includes Human rights defenders in environmental matters in the scope of protection of the treaty.

Accordingly, while public debate on land defenders is mostly concerned with aggressions against them and means of protection (Pillar 3), the pact goes beyond that by trying to make environmental protection work itself easier in the first place through enabling environmental activist to receive the information needed for their work (Pillar 2) and open venues for participation in relation to land use and management (Pillar 1). The depth and preciseness of these obligations reveal the great practical potential of the Agreement for actual environmental democracy governance.

First of all, in order to enter into force the treaty requires eight ratifications of the 24 signing states. However, 2018 is super-election-year in Latin America with six nations going to the polls, among them Brazil, Mexico and Colombia. These three countries have been particular skeptical about the agreement during the negotiating process, therefore it remains to be seen whether a shift to the right in their upcoming elections would interfere with their commitment to the agreement.

Secondly, enforcement will take place at the national level, with a commission review mechanism monitoring states’ progress. But current practice on the ground, where a lot of aggressions against nature defenders are (co-)authored by state actors, and state’s skepticism during the negotiation raise concerns whether the implementation into the national frame will live up to the high standards of the treaty.

And lastly, the treaty focuses on States. However, concerning infrastructure and energy projects the main power lies with the private sector, particularly transnational corporations and a considerable number of attacks against environmental defenders are carried out by non-state actors, particularly corporations and paramilitary groups.

This shows that this treaty, while representing an innovative step in the right direction and possibly handing environmental defenders valuable tools for their work and protection, might also run the risk of being rendered a “paper tiger”. As Amnesty International rightly points out, “simply signing a treaty is not enough“. As with every international human rights treaty its concrete implementation in the national context is the key to its success. Therefore, it depends on the governments of the region to turn the words of Costa Rican president Luis Guillermo Solís into reality and to let this regional instrument indeed become “a turning point in the fight against poverty, inequality and hate”. If the negotiating process and current state practice show one thing, it is that this will not happen without fierce pressure from civil society.

Alexander Gorski is an LLM student in International Human Rights and Humanitarian Law at Viadrina University in Frankfurt (Oder) and an activist at Interbrigadas e.V.