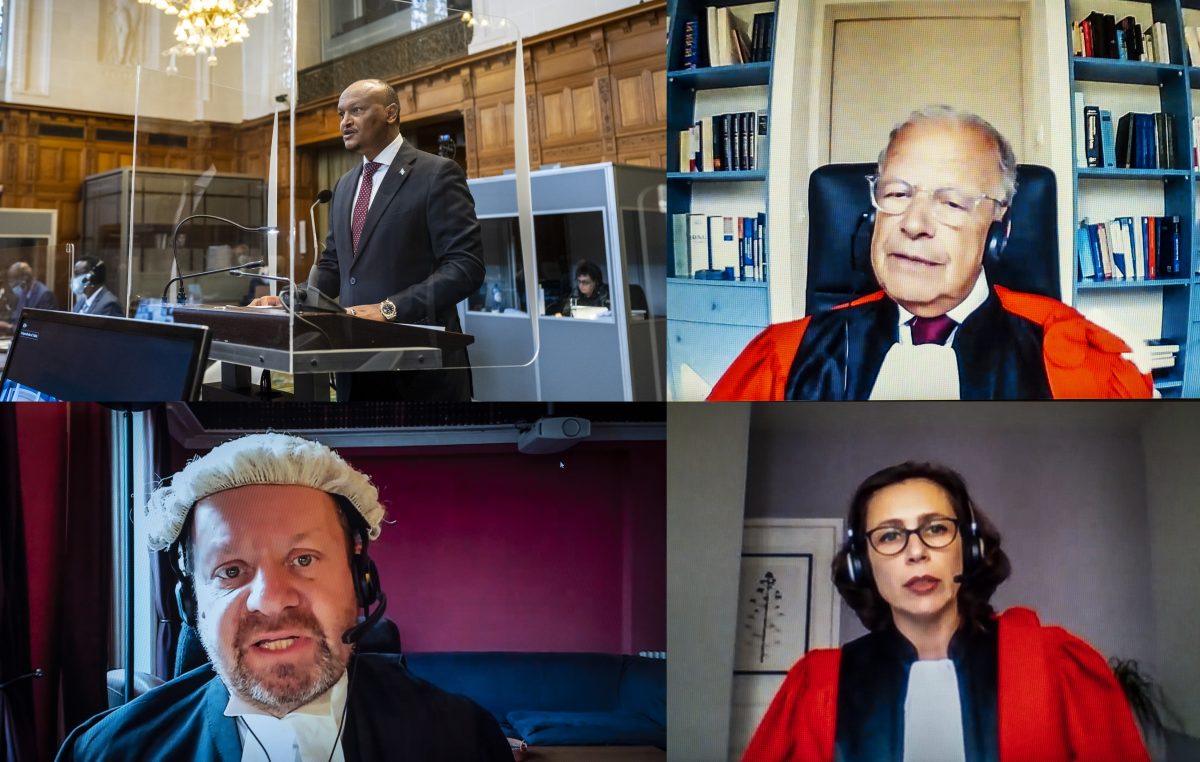 Members of the Delegation of Somalia on the first day of the hearings. Source: International Court of Justice (ICJ)
See all articles

A comment on the oral hearings in the Case of Maritime Delimitation in the Indian Ocean (Somalia v. Kenya)

From 15 to 18 March 2021, the International Court of Justice (ICJ) held oral hearings in the Case of Maritime Delimitation in the Indian Ocean (Somalia v. Kenya). Initially scheduled to take place in September 2019, the hearings had been postponed three times as requested by Kenya. A fourth request for postponement due to the COVID-19 pandemic was denied and the hearings were held in a hybrid format with some judges and representatives of the parties attending in person, while others participated remotely via video link. Kenya communicated shortly before the hearings that it would not participate; the reasons were not made public by the Court. In a press statement published on 18 March 2021, the Kenyan Ministry of Foreign Affairs alleged “procedural unfairness at the Court” and a need to “protect the sovereignty and territorial integrity of the Republic of Kenya”.

Kenya supported this claim by providing three reasons, none of which seem convincing: First, the Court allegedly lacks jurisdiction to hear the case. This is in contradiction to the Court’s decision on its jurisdiction of 2 February 2017. Secondly, Kenya allegedly lacked time to prepare its case due to the COVID-19 pandemic. Considering the entirety of the proceedings between Somalia and Kenya, this argument also seems unconvincing. The proceedings were initiated in August 2014 and oral hearings on the merits were initially scheduled to commence in September 2019, thus long before the COVID-19 pandemic had reached Kenya. Without providing further information, Kenya failed to substantiate its second argument. Thirdly, according to Kenya, the participation of Judge Abdulqawi Ahmed Yusuf in the current proceedings renders them unfair since Mr Yusuf is a Somali national. However, both the Statute and the Rules of the Court allow for the involvement of nationals of one party in proceedings in front of the Court. In such cases, Art. 31 of the Court’s Statute gives the other party the right to choose a person to sit as an additional judge ad hoc, a right of which Kenya made use by nominating Judge ad hoc Gilbert Guillaume. Whatever the real reasons for Kenya not to participate, the stated reasons seem rather far-fetched.

What is the dispute between Somalia and Kenya about?

The case between Somalia and Kenya concerns a dispute about the delimitation of the maritime boundary between the two coastal states. While Kenya argued in its 2018 Rejoinder that the maritime boundary follows a line of parallel latitude extending in easterly direction, representatives of Somalia argued during Somalia’s oral pleading that the boundary follows the equidistance line extending in south-easterly direction. The two approaches result in very different outcomes as can be seen on this map published by the BBC:

The disputed area is around 160,000 sq km in size (thus almost three times larger than the entire German sea area) and is expected to be rich in oil, gas, and fishing grounds. While both states are eager to tap into these valuable resources, Somalia has stated that it will not grant any oil or gas exploitation rights until a decision has been rendered by the Court.

What has happened so far?

In 2009, Kenya and Somalia signed a Memorandum of Understanding (MoU), declaring that the delimitation of the continental shelf between the two coastal states is not settled and that this constitutes a maritime dispute. In August 2014, after negotiations between the two states had failed, Somalia instituted proceedings before the International Court of Justice. In its application Somalia asked the Court “to determine, on the basis of international law, the complete course of the single maritime boundary dividing all the maritime areas appertaining to Somalia and to Kenya in the Indian Ocean, including the continental shelf beyond 200 [nautical miles]”. On 7 October 2015, Kenya raised preliminary objections to the jurisdiction of the Court and to the admissibility of Somalia’s application. The Court rejected these preliminary objections on 2 February 2017.

What are the legal arguments of Somalia and Kenya?

Representatives of Somalia argued last March for the application of Articles 15, 74, and 83 UNCLOS. According to Somalia, the application requires three steps: first, the Court draws the equidistance line. This line is then adjusted in two steps to allow for an equitable solution taking into account the geographic circumstances and the lengths of the respective coasts. Somalia argued that an unadjusted equidistance line would provide for an equitable solution.

In its oral pleading, Somalia refuted this argument in terms of law and fact. Professor Pellet, who appeared on behalf of Somalia, argued that Kenya’s communications between 1979 and 2014 constituted mere unilateral acts which cannot determine a maritime boundary. Only an agreement, expressly or tacitly, can have this effect. According to Professor Pellet, acquiescence would require a positive reaction and not mere silence. This in turn raises the question how unilateral action, acquiescence, and (tacit) agreement can be distinguished.

Professor Sands, also appearing on behalf of Somalia, argued that, in any event, the requirements of acquiescence were not met. Kenya never consistently claimed a line of parallel latitude as the maritime boundary. Moreover, Somalia was not capable to protest Kenya’s unilateral proclamations as it lacked an effective central government from 1991 until at least 2009 due to civil war.

‘Failed states’ and the law of acquiescence

This part of Sands’ argument raises another interesting aspect: Does the concept of acquiescence apply to ‘failed states’? Acquiescence is generally understood as a form of consent inferred from a juridically relevant silence. As a prerequisite, however, the state in question must have knowledge about a fact or claim to be able to consent to it. This is where Professor Sands’ argument comes in. Somalia during 1991 and 2009 has often been described by political and legal commentators as a ‘failed state’. There is no conclusive definition of a ‘failed state’. However, there are common characteristics that one can identify. UN General-Secretary Boutros-Ghali named in his Supplement to an Agenda for Peace “the collapse of state institutions, especially the police and judiciary, with resulting paralysis of governance, a breakdown of law and order, and general banditry and chaos.” Giorgetti describes ‘failed states’ by their incapacity to perform their obligations towards their citizens and the international community due to the collapse of all state functions. Somalia experienced a near complete disintegration of all governmental authority and destruction of public infrastructure after the overthrow of the Siad Barres regime by the United Somali Congress in 1991 and the civil war that ensued afterwards. This prompted the characterisation of Somalia as a ‘failed state’.

‘Failed states’ continue to be subjects of international law. Therefore, they continue to be bound by their international obligations and, theoretically, could enter new ones. However, as Giorgetti points out, lacking effective governmental authority, they are not able to perform any of their functions nationally or internationally. As government agencies cease to operate and international representation is halted, the ‘failed state’ enters a state of paralysis. Such a state, it seems convincing to assume, cannot be legally bound by acquiescence, not as a rule of law, however, but ipso facto due to the lack of operating government organs.

What can we take away?

The case between Somalia and Kenya is interesting for several reasons: first, in June 2020 the ICJ amended its Rules (see Article 59(2) of the Rules of the Court) to allow for hearings being held entirely or partially via video link. Secondly, the case can be seen as another example of the Court acting as a trusted resource to decide territorial disputes. Since its inauguration, the ICJ has dealt with more than 30 cases that exclusively or predominantly concerned a territorial dispute, the most recent examples being the 2018 Maritime Delimitation and Land Boundarycase between Costa Rica and Nicaragua and the 2019 Chagos Advisory Opinion. Four other cases dealing with territorial disputes are currently pending before the Court. Thirdly, the case raises interesting questions of international law such as the role of acquiescence in maritime delimitations and the question whether ‘failed states’ can be bound by acquiescence at all. Lastly, the case is an example of the inherent limitations of international adjudication: A successful settlement of a dispute requires cooperation of the parties. Kenya, however, has decided to boycott the proceedings by not participating in the oral hearings. Judge Donoghue, President of the Court, stressed in her opening of the oral hearings that this will have no influence on the continuation of the case. We shall see whether Kenya will accept a decision of the Court despite its absence during the oral hearings and its allegations against the impartiality of the Court. 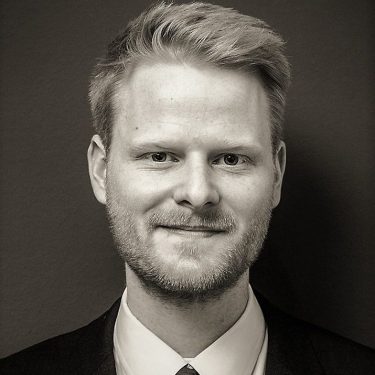