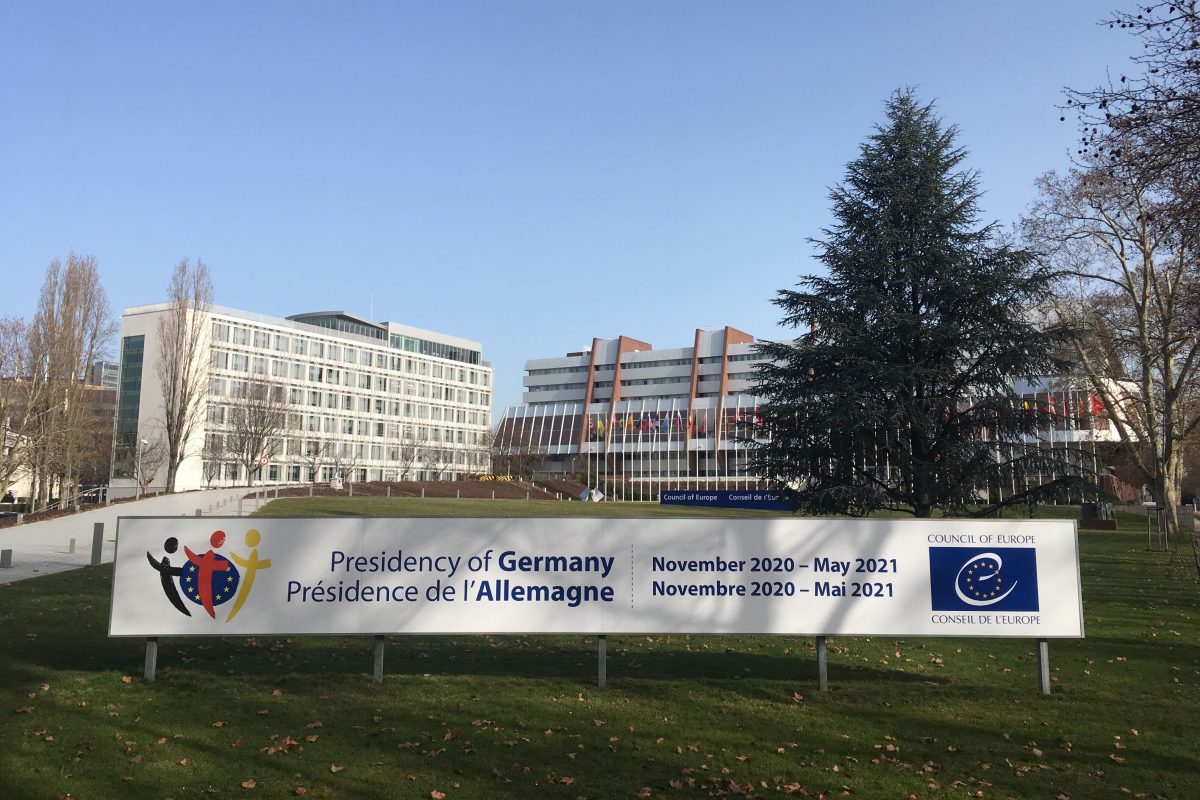 “What Should Be a Better Alternative to the Council of Europe’s Unique System?”

From November 2020 until May 2021, Germany holds the Presidency of the Committee of Ministers, the Council of Europe’s decision-making body. At the halfway point of the term, we had the chance to discuss the presidency’s goals and the current challenges of the Council of Europe with Dr Axel Berg, a former German diplomat and currently Special Adviser on the German Presidency of the Council of Europe at the German Foreign Office. Before taking up a career in diplomacy, Dr Berg was a Researcher at the Max Planck Institute for Comparative Public Law and International Law. As his thorough analysis shows, he combines profound knowledge in the field of international law with practical experience in the diplomatic and political arena.

As we see it, and as stated in the Presidency’s priorities,  the German Presidency is an opportunity

This being said, six months are a very short period in international relations, not the least in the Council of Europe, if you want to achieve tangible results. That is why we decided that the German Presidency should concentrate its efforts on a few important items, where we thought we could contribute in a particular way.

With regard of upholding human rights, democracy and rule of law, our first priority, the goal is to highlight the special role of the European Court of Human Rights and in particular to contribute to a better implementation of its judgements. In addition we want to promote the accession of the EU to the European Convention on Human Rights, where we indeed had a special situation that you could describe as an „added value“, since Germany was holding both the Presidency of the Council of the European Union and the Presidency of the Committee of Ministers of the Council of Europe at the end of 2020. Here we were very much engaged in generating synergies between those two tracks, in the relevant fora, in our consultations with Member States as well as with the EEAS.

Regarding future challenges, the German Presidency is paying special attention to the ongoing work of the Council of Europe’s Ad hoc Committee on Artificial Intelligence. Besides diplomatic efforts to achieve some first results, as the adoption of the feasibility study, a high-level conference was organized by the Presidency in co-operation with the Council’s Secretariat to foster further progress. At another conference on hate speech, we tried to promote anti-discrimination strategies, thus again supporting the valuable work of the Council of Europe in this field. Bringing the Council of Europe closer to the people, includes a number of events in which we, together with other stakeholders, think tanks and our embassies in Member States, inform about and discuss the goals and tasks of our Presidency, addressing in particular young people.

The role of the Council of Europe is based on the “common heritage” of the Member States (Statute, preamble). Given that there is no uniform conception of human rights, democracy, and the rule of law within the 47 Member States, how can the Council propose common policies? An example of the difficulties faced in this regard could be the rights of persons of the LGBTI* community (Presidency’s Priorities).

The Council of Europe is a unique organization and with its main document, the European Convention of Human Rights, it sets the highest standards worldwide for the international protection of human rights. And yes, we still describe the underlying values as the „common heritage“ of the peoples of the Member States. But through the European Convention of Human Rights and more than 200 conventions, agreements and protocols that have been adopted in the framework of the Council of Europe, we do have a common legal base, which is much more than a „common heritage“, they are international obligations for all States that have ratified them. It is true that we do encounter different ways of how Member States organize the protection and implementation of human rights in and into their legal systems. But it is very clear for all Member States that their constitutions and their law, have to be in conformity with the European Convention of Human Rights and the other legal documents binding them. In cases of doubt, it is for the European Court of Human Rights to decide whether national rules and measures taken by a Member State are violating these legal obligations.

As regards the rights of LGBTI persons, we can see that progress has been achieved, but more needs to be done. If Member States, or to be more precise, Governments are discriminating those persons, the message is clear: Human rights apply to everyone, regardless of their sexual orientation and gender identity. The German Government is resolutely opposed to any form of discrimination or violence against LGBTI* persons and is working to ensure equal rights for all.

How does the Committee of Ministers balance Realpolitik with the promotion of democratic institutions and the rule of law and the protection of human rights?

The Committee of Ministers is the place where Realpolitik happens. Here, Member States discuss their different approaches to the implementation and protection of human rights or even confront each other, where criticism is expressed, appeals are made and defense lines are taken. And where eventually, if a State is not willing to change course, even sanctioning measures can be initiated.

This being said, sanctioning measures are only the second-best solution. Convincing a Member State to fulfill its obligations, helping that State to abide by the rules is much more reliable and effective. And for that purpose, it is much better if this State is a member, while you can make use of all the Council’s mechanisms. When it comes to the negotiation of new standards, the setting of new rules with regard to the protection of human rights, here again, Realpolitik comes into play. It is then the task of the Committee of Ministers or the Ministers‘ Deputies and the relevant bodies to find common ground, or a compromise if you will, to draft a text that is likely to be adopted by all Member States or at least a majority of States.

The German Presidency intends to push ahead with the accession of the EU to the European Convention of Human Rights. Is this still possible in view of the negative opinion of the Court of Justice of the EU (Opinion 2/13)? What would be the added value of this accession?

The German Presidency very much welcomes that the relevant negotiations have resumed last year in a very goal-oriented and businesslike way. Their main task is to deal with the concerns raised by the European Court of Justice in its opinion of 2014. As regards the European Union, it is bound by the obligation contained in the Lisbon Treaty which states that the EU will join the European Convention on Human Rights. An accession of the EU would allow individual applications before the European Court of Human Rights against the EU as such. One example could be complaints with regard to measures taken by the EU in the framework of FRONTEX. It is too early to expect a concrete result already during our Presidency, but we do hope for a clear signal for achieving significant progress soon.

Human rights are currently facing considerable challenges in light of the Covid-19 crisis. How is the Council of Europe, how is Germany planning to address those?

Indeed, we are confronted with a totally new situation due to the Covid-19 pandemic, a situation that has to be seen in the light of the existing documents and instruments. The Council of Europe has made clear, on many occasions, that the restrictions taken by Member States have to be balanced with human rights and must not be misused. As a consequence, the Athens Declaration of 4 November 2020 states that during a crisis and a state of emergency, any exceptional measures taken must rather be “strictly necessary, proportionate, non-discriminatory, applied only for as long as necessary and ended once the situation normalises”.

Let me also mention here the Istanbul Convention on preventing and combating violence against women and domestic violence, since it has unfortunately gained particular importance during times of lockdown. Marking the 10th Anniversary of its first signing, the German Presidency will also take stock of the achievements of the Convention and the challenges it faces. (Editor’s note: This interview was conducted before Turkey’s withdrawal from the Convention on 19 March 2021. As the current Chair of the Committee of Ministers acting under the German Presidency, the German Foreign Minister reacted jointly with other Council of Europe leaders to the withdrawal.)

The European System is facing significant challenges with regard to the implementation of the Court’s judgments at national level. Given that some States are not implementing all judgements, do you think that the European system is losing its legitimacy as an „international standard-setter of human rights” (Presidency’s Priorities)?  What is Germany’s approach to increase the implementation of the Court’s judgements?

The Council of Europe is indeed facing challenges. But it is by no means losing its legitimacy, while it has to fight to keep its credibility. It is true that we do have a number of Member States that are unwilling to implement the Court’s judgements or are trying to avoid implementing them. But the Council of Europe possesses a number of possibilities and mechanisms that can be used to control the implementation of the judgements und even exert a certain kind of pressure. The Ministers‘ Deputies are regularly meeting in the so-called “Human Rights format” to go through all judgements that have not been implemented yet. As Germany was chairing these meetings in the six months before the start of our Presidency, we invested additional energy in achieving some progress in some of the cases. During the meetings, the concerned Member States are given the opportunity to respond and explain the failure of the implementation. At the end, the Ministers‘ Deputies adopt a decision that mirrors the deliberations and, if appropriate, calls for an immediate implementation, for example the release of a person hold in prison. And this decision is also made public.

There is another possibility, which has only been used in one case, under Article 46 § 4 of the European Convention on Human Rights, namely to refer to the Court the question of whether a Member State has failed to fulfil its obligations to abide with a judgment of the Court. Additionally, the Committee of Ministers and the Parliamentary Assembly agreed on a new complementary procedure that can be initiated as a response to a Member State’s “serious violations” of its obligations within the Council.

Yes, I agree, the situation of the implementation of the Court’s judgements is quite unsatisfactory. But, on the one hand, one should not forget that the Council has been and is successful in a number of cases. And on the other hand, what should be a better alternative to the Council of Europe’s unique system? 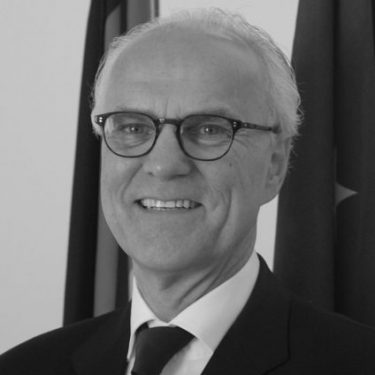 Dr Axel Berg is currently Special Adviser on the German Presidency of the Council of Europe at the German Foreign Office. Previously, he was a German diplomat with ambassadorial posts at the OSCE in Vienna, in Switzerland, Liechtenstein, and Norway. Prior to his career in diplomacy, he was a Researcher at the Max Planck Institute for Comparative Public Law and International Law, Heidelberg. 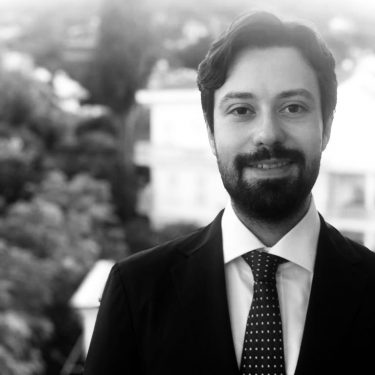 Muratcan Sabuncu is a PhD student in international law at the universities of Paris 1 Panthéon-Sorbonne and Basel. He is currently working as a teaching assistant at Moscow State University. He is an editor at Völkerrechtsblog.