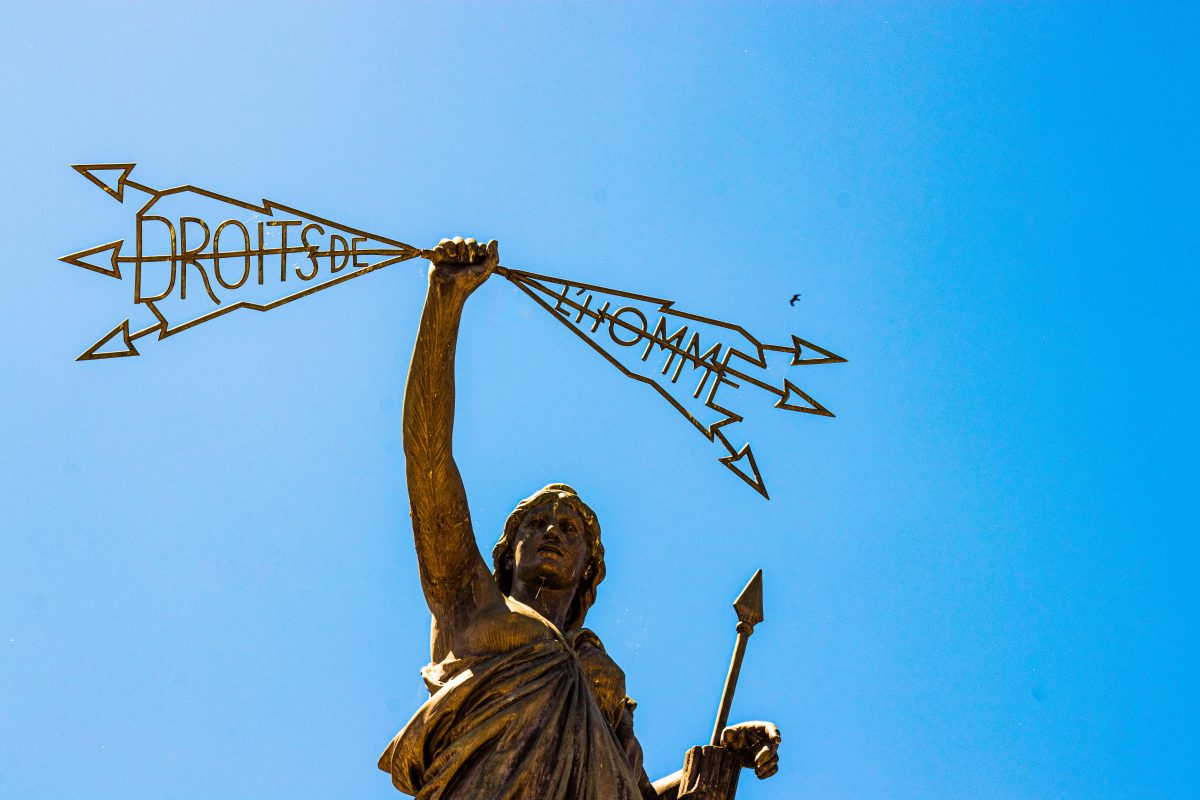 Photo by DDP on Unsplash.

It is Human Rights Day, again – an occasion to reflect on the state of academic debate about human rights. After a phase of significant human rights critiques, the debate has increasingly turned towards critical defenses of human rights as a legal project and political vocabulary. Critical legal scholarship is returning to human rights – as an unfinished business.

Of course, the attempt to characterize “the debate” necessarily falls short of the diversity and plurality of human rights scholarship and debates. We describe our perception of developments in scholarship, from an undeniably limited and specific perspective. Acknowledging those limits in perspective is at the same time an invitation to object to our description and complement it with other perspectives, not least with view to other recent human rights theorizations.

One Step Ahead, Two Steps Back?

Threatening human rights defenders is but one consequence of a more general rise of authoritarianism challenging liberal democracy, and challenging human rights. Several states have discussed leaving human rights conventions or shown open disregard for human rights judgments. One such state is Turkey; in response, the Council of Europe expressed its intention to launch infringement proceedings against Turkey. It is only the second time that this procedure, often called the “nuclear option”, comes into play (the first time was in the case of Mammadov v. Azerbaijan). Beyond the specific case, this underlines a growing concern with open disregard for human rights judgments and the difficulties for the ECtHR to operate in an increasingly controversial environment.

From All Sides: Human Rights Critiques in Practice and Theory

These challenges have a long tradition. From a state-centric, sovereigntist perspective, human rights institutions have always been criticized for interfering with political concerns of the state, and for insufficiently respecting cultural differences. This is the kind of critique that is leveled against human rights institutions by authoritarian regimes today, but ironically the criticism brought forward by states such as the UK or Switzerland that the European human rights protection system encroaches on the democratic self-determination of their people ultimately points in a similar direction.

At the same time, criticism has also long been voiced by critical scholars. One line of critique concerns the Western particularism in the origins of human rights and their dominant interpretations. Feminist and inter-sectional critiques have questioned how the formal equality of human rights law conceals actual conditions of domination. Marxist scholars point to the close connection between rights protection and global capitalism. In addition to these well-known strands of critique, more recently, one focus has been how the rise of human rights law did nothing to tackle global economic inequality. Samuel Moyn has famously argued that human rights are not enough to reach global and social justice. According to his view, they have even sidelined other and possibly more effective global justice projects. Addressing the feeling of economic insecurity, Philipp Alston in his function as UN special Rapporteur on extreme poverty and human rights has posited that we need fundamentally new visions of human rights in order for them not to proceed in „zombie mode“, even if he does not share Moyn’s rather gloomy view of the prospects of human rights. More lines of critiques could be enumerated, such as the inflation of human rights, which partly overlaps with the democratic concern voiced by some, along with an expansion of international organizations and courts monitoring and interpreting human rights, leading to unequal power relations between powerful human rights institutions and weak positions for those who ought to benefit from those rights. Reform is cumbersome and slow, as evidenced by the ongoing debates on reforming the UN treaty body system, an issue that was first put on the agenda several decades ago.

A Need for a Critical Defense of Human Rights? Four Examples

How these backlashes against liberal institutions relate to theoretical and political critiques is a matter of debate: do we see largely unrelated phenomena, a hijacking of critiques, or are causes for authoritarianism to be found precisely in the criticized shortcomings of human rights? At least on the surface, the attacks come from opposite ends. For the sovereigntist camp, human rights, instead of being “not enough”, are scolded for being “far too much”. But progressive critiques may have contributed, even if inadvertently, to a slow undermining of human rights, to be (mis)used by populist and authoritarian currents. Be that as it may, the new constellation – threats to achievements of human rights institutions – has contributed to new theoretical orientations. We observe an increased turn towards a genre that could be labeled “critical human rights defenses”: books that insist on human rights’ continued relevance while taking up the challenge by recent human rights critique. In what follows, we share a selection of some of this recent literature – four monographs that have been published in the field of human rights law in 2021

The author most explicitly following this both critical and constructive approach is Grainne de Búrca in her book Reframing Human Rights in a Turbulent Era. She finds that “(t)he project of international human rights seems to be at a critical and highly vulnerable junction” (p. 9). In response to the “political and intellectual attack” of human rights (p.1 ), she asks for “constructive scholarly thinking about the human rights enterprise by those interested in social and other forms of justice” (p. 5). De Búrca thus explicitly argues for a continued role of the international human rights movement in pursuing social justice, despite its many imperfections. Her argument is based on an experimentalist theory that emphasizes the interactive, iterative and long-term nature of international human rights advocacy. She focuses specifically on the interaction between local and global governance levels, in an attempt to overcome established dichotomies between “top-down” or “elitist” human rights discourses and more “genuine” human rights work “from below”. Instead, she suggests that it is precisely the interactive nature of human rights movements, oscillating between local and global, that make “human rights advocacy…a powerful way of challenging injustice and catalysing social, political and legal reform” (p. 12).

Angelika Nußberger in her book Die Menschenrechte. Geschichte, Philosophie, Konflikte (Human rights: History, philosophy, conflicts) written with the experience of a judge at the European Court of Human Rights, chooses a somewhat more classical approach to human rights law in considering its historical roots and codification process. Engaging with different strands of human rights criticism, she considers human rights criticism in the 21st century as criticism that is primarily directed against courts, domestic and international (p. 57). The criticism she addresses is therefore mainly the reproach voiced also in liberal democracies (Nußberger cites two former UK judges) that human rights unduly encroach on democratic decision-making. While recognizing that nowadays important political decisions are often triggered by courts rather than through political processes, she holds that “it can be argued that it is good when rulers force social progress in this way, even against parliamentary majorities” (p. 58, our translation). Even though Nußberger underlines at the end of the book that there are no simple answers to the question whether human rights lead to a “better world”, in her opinion the “discovery of human rights” was a “point of no return”. Despite the fact that human rights can be misused for political agendas, she concludes that“(t)here is no way any intellectual endeavor can ignore them today (.) (p. 62)” and that “we need them(.)” (p. 76).

One consequence of human rights criticism has been to focus not exclusively on the question of why we need human rights, but increasingly so on the how of their creation, operationalizations and (re-)negotiation. Both Nußberger’s and De Búrca’s contributions include extensive reference to human rights practice, focusing on courts (Nußberger) and on the wide network of other actors, in particular social movements (de Búrca) that contribute to shaping international human rights. In a similar vein, Nina Reiners’ book Transnational Lawmaking Coalitions for Human Rights, published just last week, focuses on the role of informal collaborations in the evolving interpretation of human rights. Looking at human rights treaty bodies in the United Nations, the book highlights interactions across different treaty bodies and between treaty body members and human rights organizations, beneath the formal processes. Similarly to de Búrca, the book views human rights neither as a top-down enterprise caught up in stiff procedures, nor does it disregard the role of those international institutions. As a core case study, Reiners shows how a small coalition of actors from different human rights organizations and one treaty body member within the Committee on Economic, Social and Cultural Rights were essential for the genesis of the right to water, a right that is today widely recognized but did not exist as a codified human right as recently as two decades ago.

Another account of the workings of human rights is Wolfgang Kaleck’s book Die konkrete Utopie der Menschenrechte: Ein Blick zurück in die Zukunft (The concrete utopia of human rights: a look back into the future), which was also discussed in a symposium on this blog in the summer. Whereas Reiners zooms in on the connection between informal and formal processes in international organizations, Kaleck focuses on courts and is concerned with the political and legal dimension of human rights litigation. The book is based on a longtime practice in litigation and an honest reflection about the ambivalences and tensions in this practice: the victories in court that cannot change a broader unjust system, as well as the defeats in court that can still mean an important step in the social mobilization that accompanies the case. The book’s perspective on human rights is one of dynamic evolutions – and of continuous learning of the actors involved.

What all four examples have in common is that they address and digest existing criticism, without, however, putting into question that human rights are both an empirical fact – here to stay – as well as normatively desirable. They can be seen as part of a turn that seeks to provide better justification for the international human rights movement, providing more refined accounts on the workings of human rights and taking up the challenges that have been leveled against human rights. It is a literature which is aware that human rights’ promise has fallen short but is convinced of human rights’ continued relevance.

This emancipatory potential of human rights discourse has long been central in writing from critical scholars like Upendra Baxi or B.S. Chimni (see also here). Those were amongst the earliest to draw attention to the limits and oppressive potential of human rights if imposed top-down. Yet, both also view human rights as potentially emancipatory. Baxi famously distinguishes between the politics of human rights as imposition of a particular rights understanding from “conveying the urgency of everyday ‘harassment and pain’ in lived subaltern experience” (p. 6) as politics for human rights. The more widely this perspective is shared, the more it is expected and also desirable that new critiques will arise, reflecting their specific lived experiences and viewpoints.

What is sure is that we find ourselves at a point in which the law and politics of human rights do not fit into binary oppositions: there is no simple “for or against human rights”, no simple “less or more”. Human rights are a field of diverse struggles and of diversifying theorizations. Critiques with view to human rights achievements and failures invite us to reconsider in which actors and processes we place our hopes. Theoretical critiques raise the question to which extent the project of a more just world can be pursued through a vocabulary of human rights – and to which extent other values and principles are essential.

Hannah Birkenkötter is an Associated Research Fellow at the Chair of Public Law and Legal Philosophy (Prof. Dr. Christoph Möllers) at Humboldt University Berlin, and currently a Visiting Scholar at the Law Department at Instituto Tecnológico Autónomo de México (ITAM) in Mexico City.