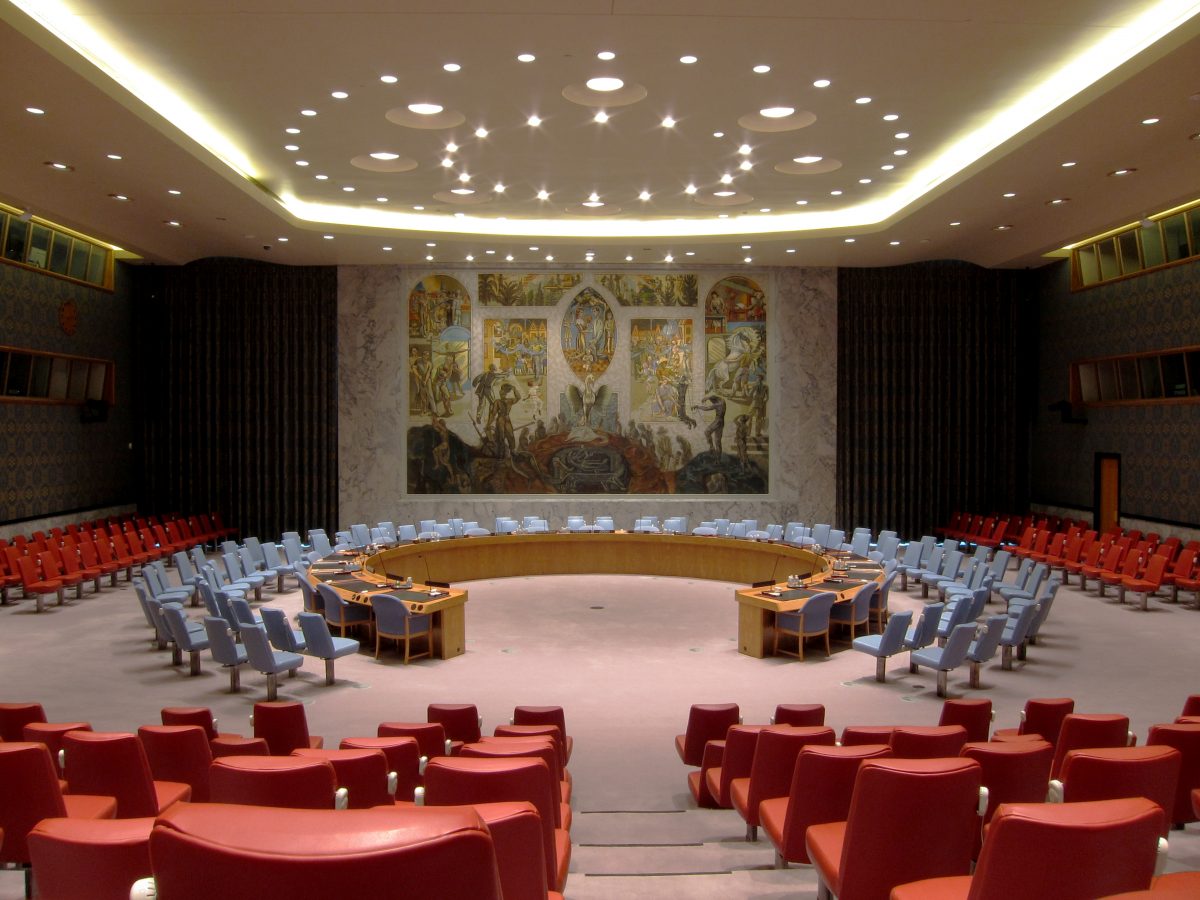 And they did it again. On 14 July 2020, the UN Security Council voted unanimously in favour of Resolution 2523. The resolution, being the third of its kind, focuses on peace, security – and youth; a generation which is the largest the world has ever known. Although the resolution did not create a huge resonance in international legal scholarship, it offers a unique chance to explore the question whether a turn to youth can be perceived in international law. To seize this opportunity, this blog post aims to place the resolution in its historical context, analyse its content and offer a critique of the text. In doing so, this post wants to serve as a plea for more engagement with the topic of youth in international law.

The story of the struggle of youth emancipation could perhaps be traced back hundreds of years. William D. Angle, at least, starts with the year 1158 and Frederick Barbarossa’s grant of rights for students. A rather modern point of reference is the Declaration on the Promotion among Youth of the Ideals of Peace, Mutual Respect and Understanding between Peoples, adopted by the UN General Assembly in 1965. This document contains six principles to educate young persons in order to “save succeeding generations from the scourge of war”. Youth, back in 1965, was understood as a homogenous group in need of guidance, a group inherently connected to the future and not the present, and seen as a threat to world peace if not educated otherwise. This image changed in the course of time, leading to the adoption of UN General Assembly resolution A/RES/36/17 in 1981. For the first time, the participation of young people was envisaged in the form of youth delegates accompanying the official delegations of Member States. More than a decade later, in 1995, the UN General Assembly adopted the World Programme of Action for Youth, aiming to improve the livelihood of youth around the globe. Here, youth was understood in a more differentiated way; a heterogeneous group, which is situated in different economic and social contexts. While the focus on education still was prevalent, participation was also – at least – considered and the unique perspective of youth highlighted. Having in mind that all those documents – among many others – were adopted by the UN General Assembly, it might be surprising that the UN Security Council also passed a resolution on youth – in 2015. Resolution 2250, praised as “historic”, focusses primarily on youth participation and secondarily on protection, strengthening a somewhat differentiated picture of youth. In a similar move, the UN Security Council adopted resolution 2419 in 2018, and on 14 July 2020 resolution 2535.

This brief history gives the impression that youth emancipation in international law was not a real struggle for recognition and participation but more a linear success story, not in need of academic backup. Quite the contrary is the case.

Of course, it must be recognised that the latest resolution of the Security Council encompasses youth in the discourse of peace and security. It underlines the special situation of young women and includes youth in a variety of topics, such as crimes against humanity, COVID-19, and peacekeeping. One could even go so far as to say that the Security Council is effectively ‘youth mainstreaming’ by promoting a ‘youth perspective’ in all matters of peace and security. But this picture would be an incomplete one.

Stating only the most obvious point: the resolution does not speak of climate change and youth, which was, for instance, criticised by the German youth delegates. Besides that, the resolution suffers from a broad and soft (not to say weak) wording. Taking only the beginning of the first operative paragraph, “Calls on all relevant actors, to consider ways to increase the inclusive representation of youth for the prevention and resolution of conflict”, it becomes apparent that nothing much has changed since the 1980s. More than forty years later, the international community is still at considering the inclusive representation of youth. Operative paragraph three reads: “Urges all parties to armed conflict to protect civilians, including those who are youth, and to comply strictly with their obligations under international law, inter alia under the Geneva Conventions of 1949 and the Additional Protocols thereto of 1977”. Yet, 90% of all casualties of direct conflict are young adult males. This really stresses the question of whether the existing rules of international humanitarian law are fit for purpose and if adhering to them is sufficient.

Apart from that, the motivation of the Security Council in pushing for youth participation should be questioned. Almost unveiling its intention on its own, the Security Council states in operative paragraph seven that it “Stresses the importance of providing opportunities for young people to strengthen resilience against radicalization to violence and terrorist recruitment by creating policies for youth, while complying with relevant obligations under international law, in particular international human rights law and international humanitarian law as an essential part of successful counter-terrorism efforts”. This suggests that the Security Council is in favour of youth participation as it fears that young people might otherwise be interested in joining a terrorist group. The one-dimensional perspective of youth from 1965 echoes through time. Youth should have the opportunity to participate because they are important stakeholders and agents of change – not because they are potential sympathisers of terrorists.

Two paragraphs further, the Security Council recognizes that social media may be a source of disinformation and a tool for terrorists. This vague and undifferentiated paragraph raises serious concerns, as US President Donald Trump associated Black Lives Matter protests with “Antifa”, who he condemned as a terrorist organisation. Black Lives Matter, however, consists largely of young people and is organised through means of social media. Hence, the group this resolution wants to protect, may be the same group it wants to attack.

To point to another weak spot of resolution 2535, operative paragraph eleven reads: “Calls on Member States to take appropriate measures to promote the physical and psychological recovery and social reintegration of young survivors of armed conflict, including those with disabilities, and survivors of sexual violence in conflict by providing, amongst others, access to quality education, socio-economic support and skills development such as vocational training, to resume social and economic life”. It must be criticised that this wording only covers situations of armed conflict. Young people are also victims of violence during times of peace as 43% of all homicides occur among persons aged ten to 29. This dichotomy of peace and conflict is an integral aspect of international law, yet it needs awareness that the same contributes to the exclusion of young perspectives and experiences. As Hilary Charlesworth pointed out, focussing on crises in international law, such as armed conflicts, may neglect structural issues of global justice. Systemic violence suffered by young persons is disregarded and not linked to “the main crisis game”, to use Charlesworth’s words here.

Resolution 2535 offers much more material for debate but besides raising specific concerns, it is vital to take a look at the overall picture. The UN Security Council addresses the issue of youth participation not only in the three named resolutions but also in country-specific resolutions, such as resolution 2506 on Cyprus or resolution 2512 on Guinea-Bissau, to name but two examples. Most recently, in its COVID-19 resolution 2532, the UN Security Council called “for concrete actions to minimize this impact and ensure the full, equal and meaningful participation of women and youth in the development and implementation of an adequate and sustainable response to the pandemic”. This clearly shows that youth and its capabilities and opportunities are increasingly considered and acknowledged. In the last years, the UN Security Council as an important body in international law turned to youth, so to speak. However, the Security Council does not act on the named issues adequately, as becomes apparent from the above analysis. International legal scholarship, being somewhat late to the party, could find a role here. More statistics, figures, and numbers on youth are needed, more research, scrutiny, and criticism are required. International legal scholarship should not miss this opportunity to guide international law-makers, to amplify the concern of young persons, to shed light on their unique perspectives. In doing so, international legal scholarship could ensure that the turn to youth in international law takes place in an inclusive and intersectional manner. Practically, this would entail, inter alia, listening to young persons, engaging with them, displaying them in research, supporting them in their advocacy for participation, endorsing their inclusion in resolutions, examining the effectiveness of international law in their realities, and this without discrimination on grounds of descent, disability, identity, gender, race, sex, sexuality or any other category – singular or interrelated – leaving, this time, no one behind.

Julian A. Hettihewa is a member of the Völkerrechtsblog editorial team and a Ph.D. candidate at the University of Bonn.