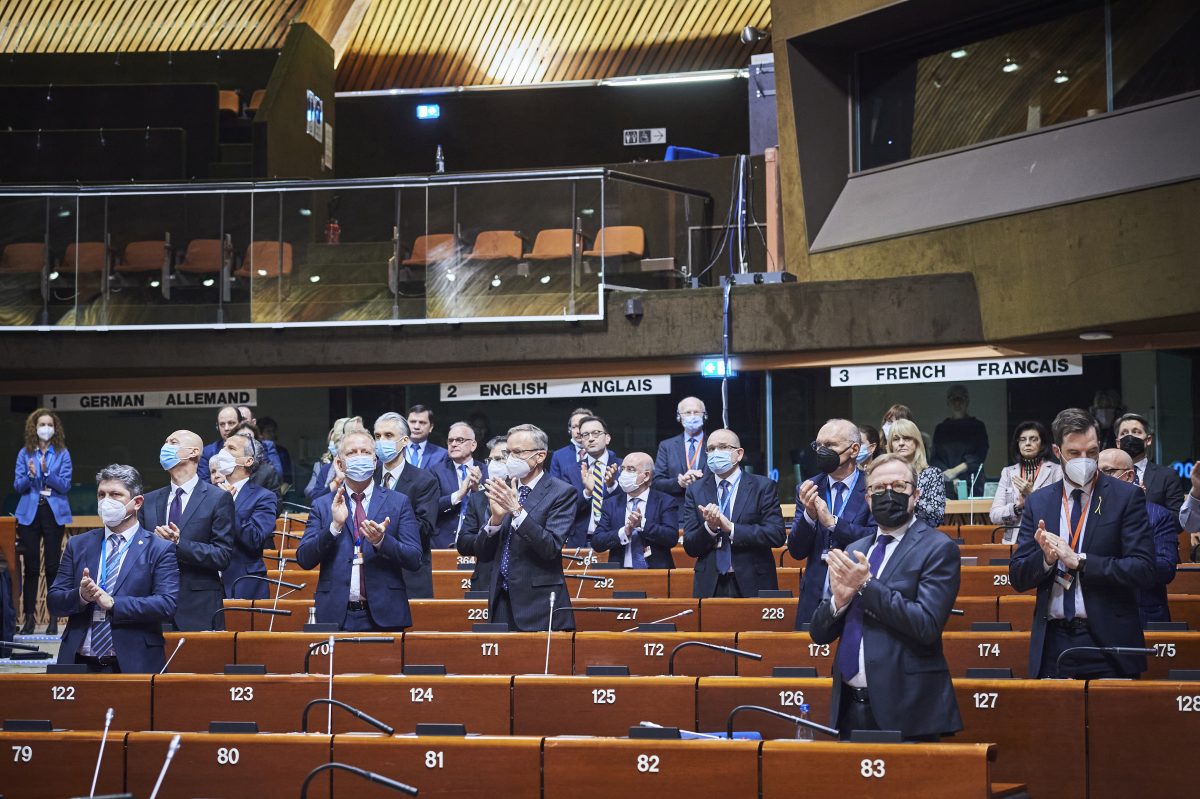 Most international organisations have not been empowered to expel Member States that violate their obligations, the European Union being a notable example. One of them that does so is the Council of Europe (CoE): Article 8 of the Statute envisages that recalcitrant members may have their rights of representation suspended as well as their membership terminated by the Committee of Ministers (Committee), the organ acting on behalf of the CoE. For the first time, the Committee applied it in relation to the ‘special military operation’ that the Russian Federation (RF) has been mounting against the territory of Ukraine. In the course of 20 days, it suspended the RF’ rights of representation and terminated its membership, the latter act being tantamount to expulsion. It will be argued, on the hand, that Article 8 does not address certain important legal and procedural questions, and, on the other hand, that the Committee failed to follow the content of Article 8 to its letter.

According to Article 8, whose provisions are elaborated in Articles 26-27 of the Committee’s Rules of Procedure (Rules), the CoE may react only if a Member State has “seriously violated” Article 3 of the Statute. It obliges members to: (a) accept the rule of law and human rights enjoyment by all persons in their jurisdiction, and (b) collaborate sincerely to bring about its aims. In such a case, the Committee has the discretion to suspend a member’s rights of representation and to request that it withdraws under Article 7. If it is not complied with, the Committee has (again) the discretion to determine that it will cease being a member as from a certain date. It follows that the irrevocable loss of membership is a two-tier process, i.e., first the recalcitrant state’s rights of representation are suspended and, thereafter, it may be requested to withdraw from the Organisation. In contradiction, in the UN a member can be expelled (Article 6 UN Charter) even though its membership’s rights and privileges may not have already been suspended (Article 5 UN Charter). It is submitted that Article 8 follows the structure of the expulsion clause in the League of Nations’ Covenant (Article 16(4): “Any Member … which has violated any covenant of the League may be declared to be no longer a Member … by a vote of the Council concurred in by the Representatives of all the other Members …”), a clause which also  resembles the process of expulsion  in the Arab League’s Charter (Article XVIII(2): “The Council of the League may consider any state which fails to fulfill its obligations under the Charter as separated from the League, this to go into effect upon a unanimous decision of the states, not counting the state concerned”).

While there have arguably been cases of members seriously and persistently violating Article 3 and despite the Parliamentary Assembly’s calls to the Committee to suspend certain members’ rights of representation and to create joint task forces ultimately acting under Article 8, the Committee had never applied it before. This might have potentially led to a legitimate expectation that it would not be exercised. Even though the lack of use of Article 8 for such a prolonged period of time could indicate that its validity has been diminished (the extent of which cannot be accurately calculated), the Committee has never abrogated its right to enforce it against recalcitrant members. However, its application against the RF raises several legal and procedural questions.

As conceived, the Article 8 procedure does not involve at all the allegedly recalcitrant member, which will only be notified of the decision suspending its rights of representation (Article 26 Rules). It follows that the member is not offered the opportunity to state its position and respond to the allegations, even though the right of reply should be considered as a right of general application, which also attaches to the membership of international organisations (c.f. Rules 73 and 115 UN General Assembly Rules of Procedure, A/520/Rev.19). And even more so when members stand accused of having violated fundamental principles. Moreover, the suspended member does not have a right to appeal against the decision and seek its judicial review. Indeed, the Statute lacks a clause on dispute settlement arising from its application.

The Decision ordering the RF’ suspension with immediate effect was adopted on 25 February 2022 (CM/Del/Dec(2022)1426ter/2.3). It was preceded by a Decision urging it to immediately and unconditionally cease its military operations in Ukraine (CM/Del/Dec(2022)1426bis/2.3, 24 February 2022) and was followed by a Resolution setting out the suspension’s legal and financial consequences (CM/Res(2022)1, 2 March 2022). The fact that neither the Decision nor the Resolution requested the RF to withdraw, as is clearly stipulated in Article 8, raises the question whether all its requirements were met. More specifically, its wording suggests that, once the Committee has resolved to initiate enforcement, it will suspend the member’s right of representation as well as ask it to withdraw by following the withdrawal clause (Article 7 Statute). In other words, the Committee may not decide to do one thing and not the other, including to request a member’s withdrawal whose rights of representation have not been suspended. Article 8 is a rather badly drafted provision, which serves one principal goal: to ultimately sever the recalcitrant state’s membership.

In the event, it was the RF that initiated the Article 7 procedure submitting on 15 March 2022 an official notification to the Secretary General. On that same day, the Parliamentary Assembly adopted an Opinion, which concluded that the Committee requests the RF to immediately withdraw. And if it did not comply, the Committee should “determine the immediate possible date from which the [RF] would cease to be a member” (‘Consequences of the Russian Federation’s aggression against Ukraine’, Opinion 300(2022), para. 20). Thus, this limited practice confirms the above submission, namely that the Committee first decides to suspend the member’s rights of representation and, in order to increase the pressure, it may request (in reality, demand) its immediate withdrawal. If the member were to decline, the Committee might determine to proceed with bringing about the consequences of withdrawal (i.e., permanent loss of membership status) itself. The difference, however, being that this is not effected by the member’s voluntary action but by means of compulsory withdrawal, which for all intents and purposes equates to expulsion.

On 16 March 2022, the Committee resolved that the RF had ceased to be a member as from the same day (CM/Res(2022)2). Again, the RF was not offered the opportunity to defend itself. It could be counter-argued that, as its right of representation in the Committee had already been suspended, it would not have been possible to have participated in the relevant meeting. This is rather a legalistic argument ignoring the apparent right of reply / right to defence that any member must enjoy. The aforementioned RF’s communication on withdrawal, on the one hand, linked it to the suspension of the rights of representation and, on the other hand, cited other reasons, e.g. that EU and NATO countries had “steadily transformed [the CoE] into an anti-Russia policy tool” (Foreign Ministry statement on initiating the process of withdrawing from the Council of Europe, 15 March 2022). Notwithstanding the reasoning, the important issue here is that  the RF  initiated the process for withdrawal (it would have taken place on 31 December 2022 under Article 7 in conjunction with Article 3 Financial Regulations and Supplementary Provisions of the CoE). In either case (be requested to withdraw, withdraw on the member’s own initiative), the basic tenet of Article 8, namely that the member, whose rights of representation have been suspended, secedes from the CoE, would have been accomplished. The distinction, of course, lies in how secession would have been interpreted and perceived: if ordered under Article 8, it would have been the Organisation ‘punishing’ the member for blatantly violating its obligations; if the Article 7 procedure had been followed, it would have been the member protecting vital national interests.

This first application of Article 8 has revealed two sets of issues. First, that the sanctioning mechanism against members violating Article 3 has several shortcomings, e.g., it does not include the right to reply / right to defence, it does not allow for the Committee decisions’ judicial review, and it does not clarify whether the Organisation may proceed with compulsory withdrawal when the suspended member has already notified its withdrawal. Second, it is questionable if all Article 8 requirements were met. Both are matters of some concern – they have to do with the principle of the rule of law as applicable to international organisations – and should be addressed by amending the Statute (Article 41) or, at least, by introducing pertinent provisions in the Committee’s Rules of Procedure.

Konstantinos Magliveras is an attorney at law and a professor of the law of international organisations at the University of the Aegean, Greece.