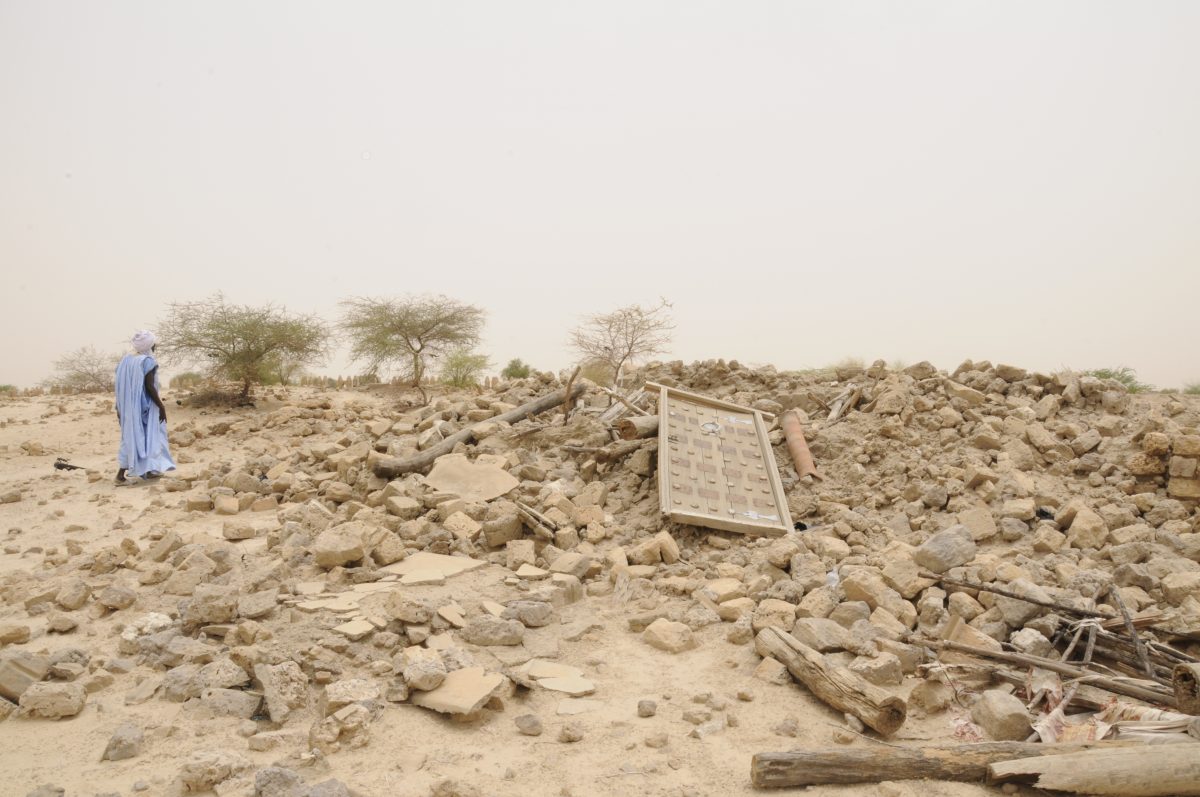 The Mohamed Mahmoud mausoleum in the cemetery of the three saints destroyed by extremists in 2012; photo by MINUSMA/Sophie Ravier, UN Mission in Mali via Flickr (CC BY-NC-SA 2.0)

The ICC’s Al Mahdi verdict on the destruction of cultural heritage: two steps forward, one step back?

On 27 October 2016, the International Criminal Court (ICC) convicted Ahmad Al Faqi Al Mahdi of war crimes related to the destruction of protected cultural heritage in Mali under article 8(2)(e)(iv) of the 1998 Rome Statute. He was sentenced to nine years of imprisonment – the lowest sentence imposed by the ICC thus far. Although Mr. Al Mahdi cannot be considered a “big fish”, the Al Mahdi case made history for two reasons: it was the first case on the destruction of cultural heritage and it is the first case based on an admission of guilt – leading to a historically short case duration of merely one year. This article discusses these aspects and concludes with some critical remarks of the ICC’s decision.

The crime was committed in 2012 in the context of a non-international armed conflict in Mali, in the course of which armed groups including Ansar Dine – of which Al Mahdi was a member – and Al-Qaeda in the Islamic Maghreb (AQIM) took control over Timbuktu. Mr. Al Mahdi was found guilty of having destroyed and damaged ten buildings in this ancient city as a co-perpetrator. The Court concluded that Al Mahdi was not only aware that these buildings did not constitute military objectives. He also knew that they belonged to the common heritage of the community and realized their immense religious and historical significance to the locals in particular, but also to Mali, Africa and the world. All but one of the destroyed buildings were protected as UNESCO World Heritage sites. According to the ICC, the buildings were specifically destroyed to hinder religious practices, as a brutal way of imposing the groups’ religious edicts – a factor taken into account in establishing the gravity of the crime.

The first conviction for the destruction of cultural heritage

In the Al Mahdi case, the ICC was, for the first time, called upon to decide on the war crime of attacking protected (cultural) objects according to article 8(2)(e)(iv) of the Rome Statute. By protecting special kinds of civilian objects, this provision – like its counterpart article 8(2)(b)(ix), for international armed conflicts – reflects the particular importance of international cultural heritage for mankind.

This is also the first time an individual was held criminally responsible for the destruction of cultural property by an international court, although international humanitarian law has protected cultural property for about a century. The Court asserted that cultural objects are protected regardless of whether the attacks are perpetrated in the conduct of hostilities or afterwards.

Although the ICC stressed the grave nature of these crimes, however, it also deemed “crimes against property […] generally of lesser gravity than crimes against persons” [para. 77]. Yet, the Court rightly considered the far-reaching impact of the destruction for locals and the international community in this case to be an important factor when assessing the gravity of the crime. As the Prosecutor noted, the crime was directed “against a people and their culture and identity” [para. 61].

One objective of the decision is the international condemnation of the acts in question and the hope that it will deter similar crimes in the future. It is no doubt illusory to assume that, from now on, the destruction of cultural heritage will cease completely. However, this official condemnation is crucial nonetheless. Currently, an increasingly amount of cultural heritage sites is being destroyed in armed conflicts, in particular by extremist groups. The Prosecutor underlined this point with reference to Syria and Iraq [para. 20]. Against this background, the verdict has an enormous symbolic significance; it signals that these crimes shall not go unpunished by the international community. More importantly, it can also inspire domestic prosecutions of cultural heritage crimes not only under the complementarity principle (article 17 of the Statute) – but possibly even in States in which the ICC does not have jurisdiction.

The Court’s first admission of guilt

Mr. Al Mahdi is also the first accused to admit his guilt before the ICC. This option is explicitly provided for in articles 64(8)(a) and 65 of the Rome Statute. The provision combines common law and civil law approaches: generally accepting “guilty pleas” and “plea bargaining”, the ICC must not accept the admission without further ado. Instead, it has to determine whether the accused understands the nature and consequences of the admission of guilt, whether it is voluntarily made and whether it is supported by the facts of the case. Importantly, any agreements between the Prosecutor and the defense are not binding on the Court.

In the present case, the ICC accepted the guilty plea and subsequently attached significant weight to Al Mahdi’s admission of guilt, his expression of deep regret and his cooperation with the Court. All this contributed to the comparatively low sentence of nine years.

An admission of guilt is treated as a mitigating factor because it leads to a faster resolution of cases. For example, it can obviate the need for victims to give evidence. Saving time and resources, the Court can cover more cases as a result. For some victims, however, the ability to testify in a high-profile case is crucial and they should not be deprived of this opportunity. Fortunately, since it is up to the Court to determine whether a particular admission is supported by the facts, it can still call upon witnesses to testify. At the same time, a sincere admission of guilt and regret can psychologically ease the victims’ suffering, thereby setting the foundation to further peace and reconciliation. Lastly, plea deals in which the accused promises to testify in subsequent trials can contribute to establishing the truth in subsequent proceedings.

The question arises whether, in the future, more defendants will admit their guilt before the ICC. Considering the unusual amount of unequivocal evidence available even without his admission of guilt, Al Mahdi’s conduct seems to have been the best strategic decision to ensure a lower sentence. This will not normally be the case. However, it seems possible that future defendants will admit their guilt for some of the charges as part of a plea agreement with the Prosecutor.

Although plea deals can speed up proceedings with the attending benefits for all sides, there are reasons to be cautious. Most importantly, an agreement resembling a plea bargain must not lead to the elimination of crimes that are more difficult to prove – for example sexual violence. Due to the ICC’s limited resources, a selection of the charges, defendants and cases is inevitable, but the search for the truth has to be preserved, especially in the interest of the victims.

One step back: Erasing gender crimes?

In light of the extensive evidence available in combination with the ICC’s limited resources and its recent criticism, it is understandable that the ICC seized the opportunity to quickly set an important ­– also political – precedent in the Al Mahdi case. However, to counteract the possible impression that “stones are more important than humans”, it is important that the ICC also files charges because of other crimes committed in Mali.

Although Al Mahdi’s conviction for the destruction of cultural heritage is a clear victory for global justice, the case could be seen as a setback for sexual and gender bases crimes. Considering that there was reason to believe that Al Madhi also committed sexual crimes, it seems to be a missed opportunity that he was only charged with attacking protected objects.

This is especially unfortunate since the ICC showed, after its conviction of Bemba earlier this year, that it not only has a progressive framework for the prosecution of gender and sexual based violence, but that it knows how to use it. The Prosecutor should carefully examine such allegation – complying with the OTP’s 2014 promise to “pay[…] particular attention to the commission of sexual and gender-based crimes at all stages of its work”.

So far, Al Mahdi has been the only case on the Situation in the Republic of Mali, referred to it by the government of Mali in 2012. In light of the wide range of atrocities committed there, as also recognized by the OTP’s report, it is to be hoped that more Mali-related cases will emerge in due course – possibly even charging Al Mahdi himself with the “missing” crimes.

Valérie V. Suhr is a PhD candidate and research fellow at the University of Hamburg.