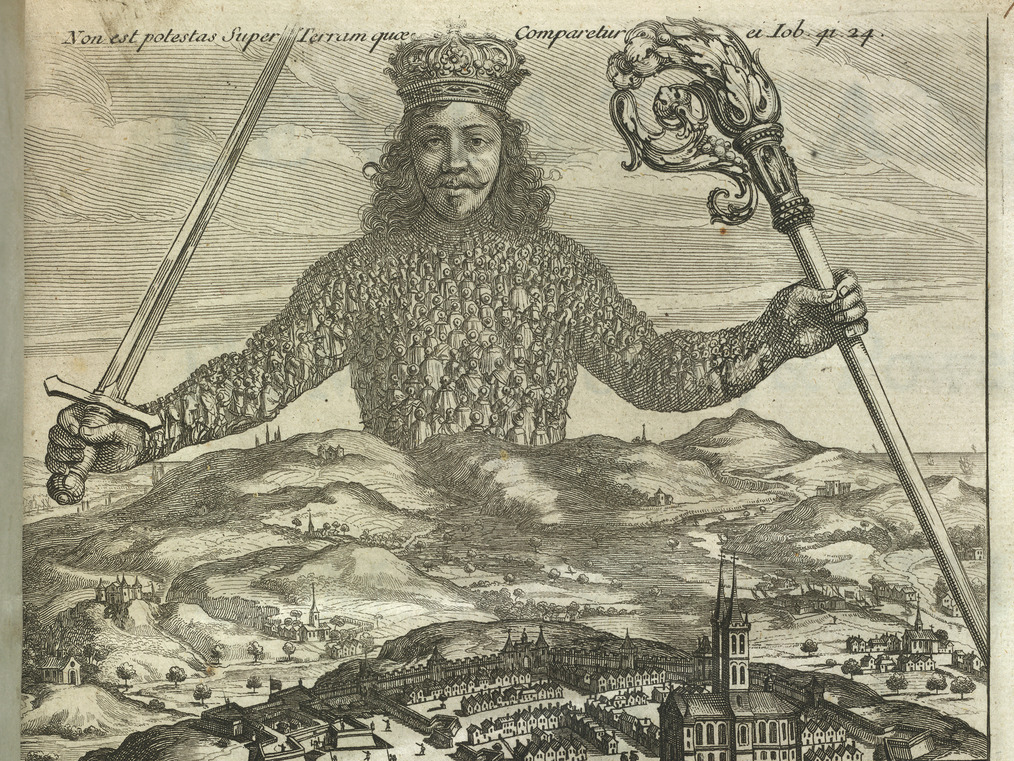 Image taken from Hobbes’ Leviathan, or the Matter, Forme, & Power of a Common-wealth, ecclesiasticall and civill, via Wikimedia Commons, free of copyright under CC0 1.0.

The Hobbesian State of Nature as Cautionary Tale

In his contribution related to Carmen Pavel’s book, Law Beyond the State, my good friend and colleague Kostia Gorobets suggests Doing Away with Hobbes. However, his depiction of Hobbes’s premises and purpose regarding the state of nature leaves something to be desired, and its relevance for contemporary international relations and international law is too easily denied.

Starting off on the wrong foot, Gorobets asserts that in the Hobbesian state of nature “we only encounter adult, healthy and capable individuals, …”. Although Hobbes does take as a premise that nature has made men equal in body and mind, this is only to point to the inescapable truth that the weakest may kill the strongest (Leviathan, Chapter XIII). Moreover, it might seem that, reading Gorobets, Hobbes considered this as the exclusive premise in his depiction of the state of nature, but nothing is further from the truth. It is not the equality of men in and of itself that characterises or produces the state of nature, but it is the lack of subjection to “a common Power” that causes all men to be in a condition of war. And in this war, with each being enemy to the other, Hobbes projects that there is constant fear and danger of violent death, and life “solitary, poore, nasty, brutish, and short”.

Of course, Hobbes was writing at the time of the English Civil War (1642-1651) and the wider Wars of the Three Kingdoms (1639-1653). Casualties in England alone are estimated to have reached 4% of the population, with a higher percentage for Scotland and tenfold for Ireland. To criticise and reject Hobbes’s construction of the state of nature for its incomplete and inadequate portrayal of human society is to ignore its historical context. Indeed, that context also explains why Hobbes claimed that in such a war nothing can be unjust. The lack of a common power signifies the absence of law and hence of justice. He adds, some would say cynically, that force and fraud are cardinal virtues in war. Otherwise, the lack of a common power was not the only evil in his historical state of nature. Hobbes’s not so hidden premise was the degeneration of peaceful society into civil war (mentioned 30 times in Leviathan): it was the manifestation of competing authorities engaged in an existential struggle for (common) power that caused the war of all against all. And with the prevalence of civil wars even today – consider Syria, Libya and Yemen, to name but a few –, who is to say (rhetorically) that he has been proven wrong?

Moving from national to international society, Gorobets references the “powerful and mesmerising Hobbesian concept that states exist in a state of nature”. Of course, Hobbes himself did not quite put it this way. Instead, he affirmed that “the law of nations and the law of nature is the same thing”, and that a sovereign has the right to ensure the safety of his or her people (Leviathan, Chapter XXX). Noteworthy then, in this respect, is that the system of sovereign States, with each being equal to the other, is one of competing authorities by definition. Again, one may observe that Hobbes was also writing during the Thirty Years’ War (1618-1648), a horribly destructive conflict – around 8 million casualties due to fame, peste et bello – mostly occurring in the Holy Roman Empire between Catholic and Protestant rulers and authorities, but drawing in outsiders such as Sweden and France and geographically extending well beyond the Empire. Taking in both European and world history, it might not be a stretch to suggest that in international relations the state of nature could well explain the power struggles between States lasting at least until the mid-20th century. Indeed, applications of force and fraud have been manifold in relations between States, and not just in times of war.

Now what Gorobets really objects to is the idea that “that there is a domain in people’s lives that is free of normative guidance as to what is right or wrong, and in which each person acts according to her own judgment as to what she thinks is best and enforces her view as she sees fit.” And he decries the notion that, in international law, “[t]he Lotus principle declares states free unless they have a specific legal obligation to follow, which implies that the actual original position of states predates, metaphysically and practically, legal normativity. The idea here (although it gradually loses popularity) is that freedom from law and from the normative commitment it requires is the starting disposition in which states exist, and that legal normativity is what states accept or enter into through an expression of consent, rather than what makes them meaningful as political and legal entities to begin with.”

Of course, more has been read into the Lotus case than can actually be found in there. Nevertheless, the PCIJ does adhere to the paradigm of sovereignty whereby each State denies being subject to a higher authority. It is for that reason that it affirmed that the rules of law binding States “emanate from their own free will” and that “[r]estrictions upon the independence of States cannot therefore be presumed.” But surely the positivists’ creed, and with that my own, hinges upon an attempt to distinguish and (to an extent) separate law from morals and to deny that legal rules originate from some unknown sources or natural law. This is not because there is no morality before (positive) law, nor because it is per se impossible to construct a natural law, but because there is and can be no certainty about the law without an authority to determine its substantive content as well as to ascertain, interpret, apply and enforce the law (as argued, more or less, by John Locke in his Second Treatise of Government, sections 124-126). Now Hobbes and Locke argued for the establishment of a (sovereign and absolute) common power (Hobbes) or a (constitutionally limited) commonwealth (Locke). Moreover, as proponents of what later came to be known as social contract theory (Rousseau, Du contrat social), both attached crucial importance to the consent of the people as the legitimate basis for the establishment of authority. Gorobets’s insistence then on (legal) normative structures even before or absent consent by States almost inevitably leads to a regression into morality or natural law (heavens forbid the positivist from going down that road!).

Moreover, it may be noted that in Hobbes and Locke consent operates in an ‘all or nothing’ mode: either the people consent, commit and subject themselves to authority, or they remain in the state of nature. This is what distinguishes national society from the international community, where States agree only by consensus (D’Amato, On Consensus) or consent to the establishment of rules in a piecemeal fashion. In other words, States (implicitly) agree or consent – either through their practice and opinio juris, or by becoming a party to a treaty – and pick and choose the rules they prefer: there is no ‘all or nothing’ for States! This, of course, leads to an uneven legal landscape of valleys and peaks with variable and varying authority (Gorobets, Contemplating an Uneven Landscape: The Authority of International Law,  forthcoming). But throwing out consent as precondition or parameter for legal normativity in international law will not necessarily improve things. Instead, one may project, this will simply lead to increased populist and authoritarian tendencies, movements and political parties within States, with their governments increasingly insisting on their sovereignty, domestic jurisdiction and freedom of action (‘take back control’).

This is evidenced also in the ambiguous commitment of States to the authority established after World War II: the United Nations. Legally, almost all States have consented, committed and subjected themselves to binding decision-making of the Security Council for the maintenance of international peace and security (articles 24, 25, 39, 41-42 and 103 of the Charter). But that consent is half-hearted at best: the great powers of 1945 did not commit at all, as shown by their insistence on the veto, and politically they reserve, along with others, the right to use armed force for a variety of purposes when it suits them. Although various authors have attempted to argue the constitutional nature of the Charter, Fassbender first and foremost, there was no Grotian moment even in 1945 (indeed, Grotius himself did not live to see the mythical ‘Grotian moment’ of his time, the 1648 Peace of Westphalia; Lesaffer, The non-Westphalian Peace): the grounds on which their reasoning stands is shaky at best. Developments over the past 75+ years have not changed this. Indeed, in recent years a return to realist politics, policies and actions can be detected. If anything then, the slow and gradual progress (Skouteris, The Notion of Progress in International Law Discourse) being made to have States abandon the state of nature by careful (positivist and conservative) construction and adherence to international law is, unfortunately, of a reversible nature: constant vigilance and reaffirmation is required to avoid such progress getting bogged down in the quicksand.

All in all, Gorobets may be right that the world of realists is a sad one, full of “moral scepticism and constant suspicion”. However, let’s not do away with Hobbes, but use his state of nature as a cautionary tale instead!

André de Hoogh is Associate Professor in International Law at the University of Groningen. His research covers a wide array of topics in the field of public international law.