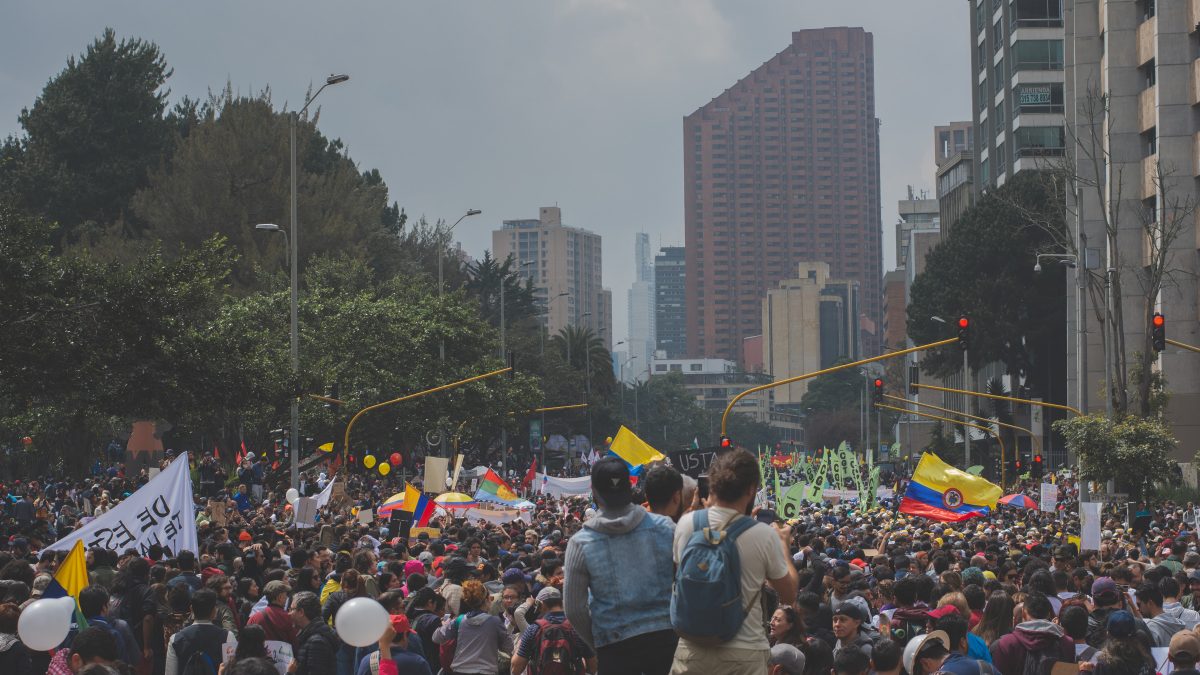 Photo by Ricardo Arce on Unsplash

The Dreadful Night Goes On

State Repression, International Criminal Law, and the Call for Justice in Colombia

At times, words fail to describe the horrors of reality. That is until we have recourse to the language of international criminal law (ICL). While its use may be problematic, helping hegemonies narrate their political and military struggles in a way that frames their enemies alone as hostis humani generis, few areas of knowledge describe state violence so aptly. Thus, one should not be too quick to discard ICL as an interpretive framework for the systematic state repression of largely peaceful demonstrations in Colombia. In fact, approaching this crisis from the perspective of international crimes and legitimate responses to their commission could prove useful. If not to extinguish the fire, at least to hold accountable those who set it alight.

Since 28 April, Colombian authorities have conducted a brutal crackdown on demonstrations against an unpopular tax billand the Duque administration more broadly. Despite sporadic clashes and the erection of roadblocks, most notably around Cali, the conduct of protests has been generally peaceful. It bears recalling that isolated instances of violence “will not suffice to taint an entire assembly as non-peaceful”. In addition, the “disruption of vehicular or pedestrian movement or daily activities” is not considered as violent action. Nevertheless, at the time of writing, Indepaz and Temblores ONGreported 47 deaths, 278 victims of assault, 963 arbitrary detentions, and 12 victims of sexual violence. Moreover, the Ombudsman informed about 548 missing persons. The Inter-American Commission on Human Rights, the United Nations (UN) Verification Mission in Colombia, the Representative of the Office of the UN High Commissioner for Human Rights, and the UN Committee on Enforced Disappearances have issued statements expressing their concern.

Colombia is a party to the Rome Statute (RSt) since 01 November 2002. It is, therefore, reasonable to consider whether such massive acts of violence constitute crimes against humanity (CAH) within the jurisdiction of the International Criminal Court (ICC). Certainly, the wave of police, military, and – perhaps more worryingly – paramilitary violence constitutes an example of what David Luban describes as cancerous politics hell-bent on destroying individual and collective aspects of human existence. It has turned membership in a political community – the Indigenous Guard, a labour union, or the demonstration itself, however ephemeral it may be – into a death trap.

Article 7 RSt and its attendant Elements of Crimes (EoC) describe CAH as any underlying act mentioned in paragraph (1), letters (a) through (k), when committed in the context of a widespread or systematic attack, carried out pursuant to or in furtherance of a state or organisational policy, against any civilian population, and with knowledge of the attack. These elements will be analysed in turn with regard to the situation in Colombia.

Under Article 7(2)(a) RSt, an attack is “a course of conduct involving the multiple commission of acts referred to in paragraph 1”. The EoC clarify that they “need not constitute a military attack”. Hence, in light of the recent judgment in Ntaganda, it suffices to establish the commission of a number of acts within “a series or overall flow of events”. This appears to be the case in Colombia, given that numerous acts of murder, severe deprivation of physical liberty, sexual violence, enforced disappearance, and other inhumane acts have been committed over the last fortnight.

The attack must be committed pursuant to or in furtherance of a policy that, for the purpose of the situation in Colombia, emanates from the state. According to the confirmation decision in Ruto & Sang, this refers to a design “to carry out an attack against a civilian population”. The Ongwen judgment compiled indicia of its existence that include, inter alia, statements condoning the commission of crimes and underlying motives. It is therefore telling that high-ranking Colombian officials have failed to categorically reject the conduct of the security apparatus. Instead, public officials have either accused demonstrators of being “terrorists” or issued feeble calls for the rejection of “violence”, without explicitly disavowing police excesses. Moreover, the defence minister expressed “gratitude and admiration” for the security forces and attributed violence to organised armed groups (OAGs) or Venezuelan citizens. President Duque, meanwhile, called for military assistance in cities affected by police brutality and ordered a full army and police mobilisation into Cali on 09 May. It seems that their policy is to end peaceful demonstrations at all cost.

The abovementioned figures for prohibited acts indicate the widespread character of the attack, which “connotes [its] large-scale nature (…) and the number of targeted persons”. It is also worth mentioning that they have occurred in several cities for almost two weeks. The alternative qualifier concerning the systematic quality of the attack, which refers to the “organised nature of the violent acts (…) and the improbability of their random or accidental occurrence,” could be inferred from the following patterns:

The attack must be directed at a civilian population. Thus, according to the Katanga judgment, its intended target must be a collective that is primarily composed of civilians, “as opposed to ‘members of armed forces and other legitimate combatants’”, regardless of their distinguishing features. Despite allegations from the defence minister that demonstrations were infiltrated by OAGs, no credible information substantiating his claims has surfaced. On the contrary, publicly available footage indicates that violence has been directed at unarmed civilians.

Additionally, the nexus requirement excludes isolated acts whose nature, aims, and consequences differ from the attack. In Colombia, it seems that underlying acts are closely linked to the repression of protests. Hence, they broadly appear to fulfil the requisite nexus.

Lastly, the perpetrators must be aware of the circumstances constituting the attack in the course of which they committed prohibited acts. They do not require a detailed understanding of the attack or the policy behind it and their motives are irrelevant. It would be difficult to imagine that persons allegedly responsible for the commission of CAH in Colombia ignore the context of their behaviour.

For the foregoing reasons, there are grounds to believe that the CAH of murder, severe deprivation of physical liberty, sexual violence, and enforced disappearance are being committed in Colombia. Furthermore, since the violence is directed at disenfranchised communities and ethnic groups, it would be worth considering whether it also constitutes persecution on socio-economic and ethnic grounds. This could shed light on the structural causes of discrimination that have traditionally infected all aspects of Colombian life.

These crimes also appear to be sufficiently grave. In terms of scale, they affected hundreds of persons over a wide temporal and territorial scope. Regarding their nature, they represent gross violations of the rights to life, integrity, liberty, and freedom from inhumane treatment or sexual violence. Information about the manner of commission of the crimes indicates that they may be attributable to public servants who abused their authority and subverted their constitutional duty to protect the life, integrity, and liberty of the people. Furthermore, they appeared to act wantonly and to enjoy the suffering they caused upon the civilian population. Additionally, the Indigenous Guard appears to be targeted on discriminatory grounds. For instance, president Duque called on them to “return to their reservations” in order to avoid “unnecessary confrontations”. In the current security climate, his words represent a thinly veiled threat of ethnic violence.

But naming the beast is not enough. It is also necessary to find ways to tame it.

Diplomatic action for the imposition of limitations on military assistance and targeted sanctions – i.e. under United-Statesian and European “Magnitsky” acts –, as well as legal proceedings to obtain precautionary measures and to ascertain Colombia’s responsibility under the American Convention on Human Rights should be pursued. Nevertheless, they are not enough. We must remember that: “Crimes against international law are committed by men, not by abstract entities, and only by punishing individuals who commit such crimes can the provisions of international law be enforced.”

Consequently, we should explore avenues to guarantee that CAH will not go unpunished. Due to the politicisation of Colombia’s Office of the Attorney General and Congress’ appalling record on accountability, an international response seems appropriate.

ICC intervention in Colombia is unlikely. Indeed, the ongoing preliminary examination is focussed on evaluating the admissibility of proceedings for the crimes that were identified by the Office of the Prosecutor (OTP) in its 2012 interim report. Notwithstanding the ongoing submission of information related to Colombia under article 15 RSt, the growing OTP docket – which is set to include complex situations in Nigeria, Palestine, and Ukraine – does not appear to leave room for further engagement with Colombia.

International justice, however, does not stop at the ICC. Recent experiences in Syria and Iraq offer examples of how investigative mechanisms may build robust case files that could be transferred to foreign authorities for prosecution. Furthermore, the rise of universal jurisdiction cases gives reason to hope that, regardless of the shift from a “global enforcer” to a “no safe haven” paradigm, this continues to be a powerful tool in the fight against impunity. Faced with the gravity of the CAH allegedly committed in Colombia, which not only threaten basic human guarantees but perhaps even (formal) democracy, it would not be unreasonable to consider having recourse to one of the few nations that exceptionallyallow for trials in absentia under universal jurisdiction, such as Germany.

Interpreting the crisis in Colombia through the lens of ICL helps us make sense of extraordinary chaos and express profound repudiation for such evil. But we should not stop there. If the purpose of language is to convey our innermost needs, should it not be the aim of the law to provide ways to address them?

All views expressed are strictly personal and do not reflect any institutional position on the matters discussed in this article.

In Memoriam of Santiago Murillo, Nicolás Guerrero, Lucas Villa, and the countless victims of state repression in Colombia whose only crime was to exercise a fundamental right enshrined in international law and Article 37 of the Colombian Constitution. The memory of their joyfulness and innocence will forever highlight the cruelty and senselessness of their deaths. 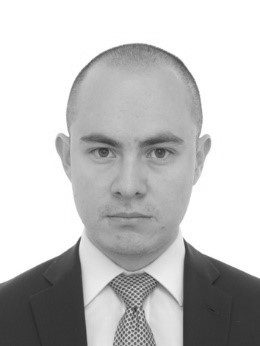 Santiago Vargas Niño
Santiago Vargas Niño is a Colombian lawyer and lecturer specialising in international criminal law and international humanitarian law. He holds a J.D. (Eq.) and a B.A. in Political Science from Los Andes University as well as an LL.M. (Advanced) in Public International Law from Leiden University. He has worked at Colombia’s Special Jurisdiction for Peace and the Office of the Prosecutor of the International Criminal Court.
View profile
Share article
facebook twitter
Print article
Print