The Corporation, Law and Capitalism 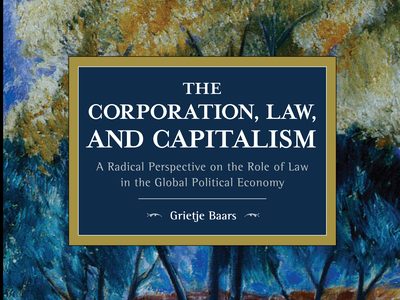 The Corporation, Law and Capitalism by Greetje Baars, Haymarket Books (2020)

Grietje Baars’ recently published book The Corporation, Law and Capitalism is a powerful intervention on multiple accounts. Baars’ study spearheads and complements a newly revived Marxist legal tradition in the footsteps of Soviet legal theorist Evgeny Pashukanis, whose work on “The General Theory of Law and Marxism” (1924) pioneered the commodity-form theory of law. Pashukanis’ main argument is that the commodity form and the legal form follow the same logic, the logic of capital. China Miéville’s Between Equal Rights (2004) took up the challenge to comprehensively bring this theoretical endeavor into the realm of international law and contemporary international legal debates. With some modifications to Miéville’s interpretation (p. 19) and a historical-material lens, Baars takes their readers on a journey to rediscover corporate power in today’s world.

For this week’s symposium we have assembled a variety of contributions that engage with the book, from both scholars and (legal) activists who in their work address “the question of the corporation.”

Between utopia and affirmation of the status quo

Working toward the world we want to live in

Michael Bader
Read more
Share Symposium
facebook twitter
Submit your Contribution
We welcome contributions on all topics relating to international law and international legal thought. Please take our Directions for Authors and/or Guidelines for Reviews into account.You can send us your text, or get in touch with a preliminary inquiry at:
editorial-team@voelkerrechtsblog.org
Subscribe to the Blog
Subscribe to stay informed via e-mail about new posts published on Völkerrechtsblog and enter your e-mail address below.