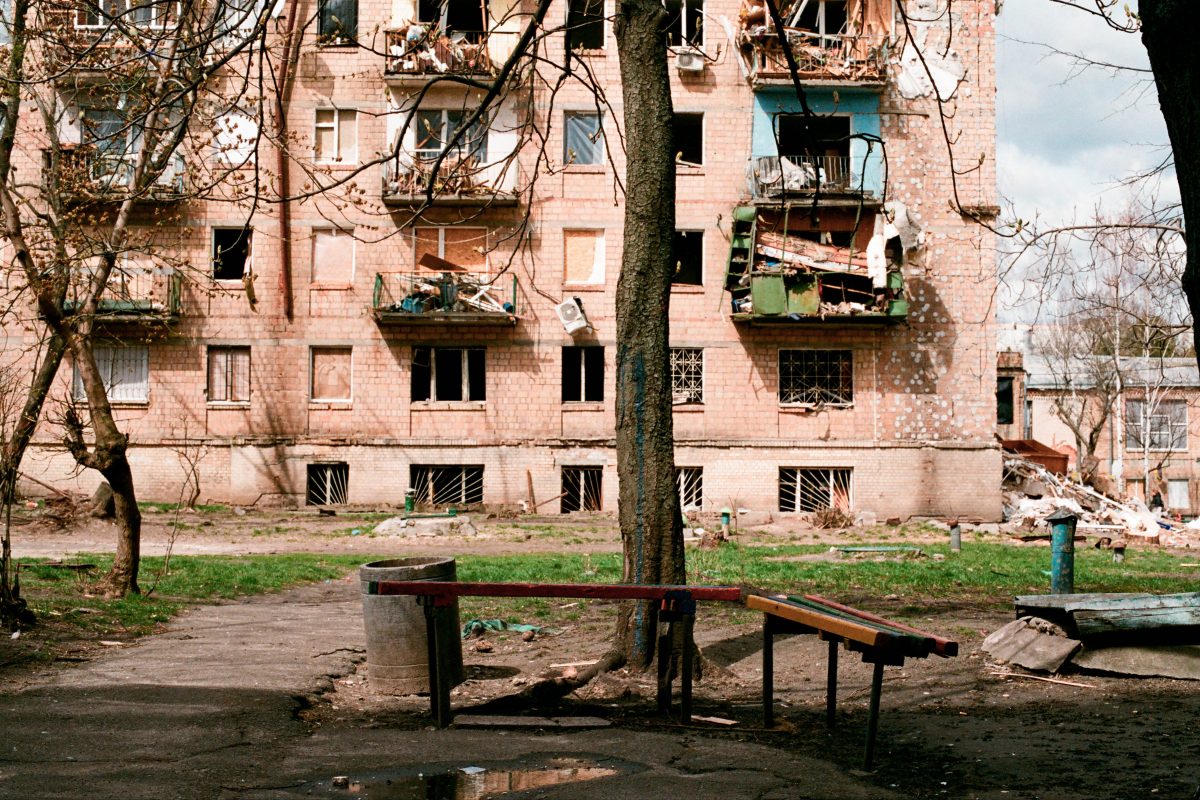 Photo by Maksym Pozniak-Haraburda on Unsplash.

On August 4th 2022, Amnesty International published a report criticising the tactics of the Ukrainian Armed Forces (UAF) for endangering civilians by launching attacks and placing military targets in populated areas. The report led to considerable flak from military officials, who called the expectations of the organisation unrealistic, Amnesty’s Ukraine office, who criticised their lack of involvement and whose head quit in the wake of the report, and scholars, who used it to re-examine just war theory and the inequality of belligerents in a war of aggression. This even led the organisation to apologise for the “distress” caused by the report.

The reaction to the report indicates that the basis for the conclusions in the report are not well-founded in existing International Humanitarian Law (IHL). Michael N. Schmitt excellently examined the report from a legal perspective, coming to the conclusion that the report failed to both provide evidence of violations or even identify the laws supposedly being violated. However, the report exemplifies an interesting debate in humanitarian protection which is becoming ever more relevant – namely the debate on the threat to civilians in populated areas from explosive weapons. Given the numerous responses on twitter and the legal blog-o-sphere, this post will only briefly examine the accusations in the report. Rather, it will situate the report within the context of the larger debate around the protection of civilians in populated areas and examine the danger of dissonance between calls to expand the limits to warfare and a shrinking of belief in such limits by those on the battlefield.

The Report and the Response

Amnesty’s report is quite brief. It highlights three major issues that, it argues, point to patterns of behaviour on the part of the UAF that put civilians in harm’s way – namely the launching of attacks from populated areas and the use of hospitals and schools for military purposes. Each of these apparent patterns of behaviour have different statuses in international law.

Potentially the best case for a violation made in the report relates to hospitals in customary law. There is a prohibition of launching attacks against hospitals – putting the onus of protection on the attacker. Customary international law does, however, also establish neutralised zones around hospitals, which would make using such buildings for military purposes inexcusable. Furthermore, exploiting protected symbols is also forbidden if the hospital were still marked, though whether or not such markings were on the facilities in question was unclear from the report. Schmitt’s blog post highlights that articles 12 and 13 of Additional Protocol I (AP I) were meant to protect from placing hospitals near military targets and that hospitals lost their protection when used in harmful acts against the enemy like as a firing position or sheltering weapons or soldiers, though only after fair warning. All in all, while the report refers to incidences where hospitals were used by the UAF, it does not provide enough information, and does not discuss the obligations of the Russian Armed Forces (RAF).

The use of schools is less problematic, as the report itself concedes that schools are no longer in session, making them no longer protected. As mentioned in the report, even the Safe Schools Directive permits the use of unused schools given “no viable alternative”. Since the beginning of the war, schools have been used for military housing on both sides, as some of the only structures capable of housing large numbers of soldiers. As with hospitals, the report fails to give enough detail to determine the exact circumstances of use.

The positioning of soldiers in and launching attacks from populated areas presents a greater challenge, particularly given the vagueness of the report. Prof. Schmitt’s blog post calls into question the precise violation highlighted by Amnesty. He underscores that the protections against the use of human shields include the intent to use civilians as a shield against armed attacks, which Amnesty does not suggest. Marc Garlasco points out that IHL was not intended to protect against the military actions in populated areas when urban areas are the battlefield. While both sides are equally bound to IHL, the challenges of contesting urban areas are not equal. The RAF can choose their targets, forcing the Ukrainians to either contest or surrender their territory. While urban warfare presents a clear danger to civilians in contested cities, it is unrealistic to expect the UAF to limit their defence of important cities out of the potential impacts of enemy attacks or put themselves at a tactical disadvantage by attacking an enemy with air superiority over open ground out of similar considerations. As Garlasco argues, suggesting otherwise potentially gives Russia justification for the greater use of indiscriminate weapons when fighting in urban settings.

The Recent Debate on Explosive Weapons in Populated Areas

The issues pointed out in the report are not necessarily founded upon solid international law. They rather build upon an ongoing debate about how to expand the law towards a potential prohibition on the use of explosive weapons in urban areas. In Ukraine, this has been the chief cause of civilian casualties since the escalation of the conflict in February. As cities have fallen under siege, everything from ballistic missiles and airstrikes to mortars and grenades present a unique danger for those who may not be the target of attacks, but just be seeking shelter nearby.

Because there are no specific rules or practices recognizing the terrible impact on civilians, and general principles such as proportionality do not seem to be enough, organisations have begun to see this issue as the new frontier of expanding limits to armed conflict. The International Committee of the Red Cross (ICRC) has published quite a bit on it in the past decade, including an expert meeting in 2015 and responded to political developments on the issue over the past 18 months. Likewise, the NGO network the “International Network on Explosive Weapons” (INEW) has worked on bringing attention to this issue since 2011. The efforts of the ICRC and INEW, amongst others, led to a draft political statement in June 2022, which provides a first step toward a clear prohibition that some argue for, while still remaining laced with language of feasibility and practicality.

It seems that the Amnesty report is trying to add to this current discussion, albeit on weak legal footing. It highlights examples where the presence of the UAF puts civilians at higher risk of attack by heavy weapons. The coexistence of military targets and civilians is dangerous and carries a high risk for the civilian population. Yet, from the evidence provided in the report, it does not appear that the actions were illegal. It seems rather that the report tried to stretch accepted IHL to cover acts that, while tragic, fall too far into the realm of military necessity, feasibility, and practicality.

In contrast, recent military developments on and off the battlefield have arguably not only shown resistance toward such an expansion, but also question more established aspects of IHL. In 2021, the then Judge Adjutant General of the US Army co-authored an article underscoring the need for increased legal flexibility in order to fight a future theoretic peer-to-peer conflict. He added that legal scholars and those who pushed for a prohibition of explosive weapons in populated areas did not understand the realities of the battlefield and conflated IHL with more constraining rules of engagement. His and other accounts include calling for the possibility of a more flexible use of explosive weapons in populated areas.

Thus far, the report and the broader discussion on explosive weapons in populated areas do not necessarily carry significant danger to it beyond the war in Ukraine. If anything, the attempts to expand the protection of civilians on the battlefield seem admirable. However, while military leaders call certain norms into question, attempts to expand the rules around protection bring distinct risks.

History is full of examples of, albeit less formalised, customs of warfare that were undermined by political and technological progress. In Ancient Greece, the strong customs which limited warfare in inter-Hellenic warfare for centuries were no longer seen as appropriate during the escalating cycle of violence in the Peloponnesian War. Likewise, the customs around war for pre-conquest Central Americans and Spanish were both undermined by their interaction during the Spanish Conquest. Additionally, there are examples of cases where attempts to limit warfare were never viewed as appropriate on the battlefield – like attempts to ban the crossbow in wars between Christians. In these cases, customs may have survived certain violations, but when they were no longer seen as appropriate by those implementing them, the entire regime of norms was undermined.

As military thinking related to peer-to-peer conflicts and military practice seem to potentially already struggle with more accepted ideas of IHL, working to expand IHL to further constrain action may only serve to undermine all of IHL. If defending a city instead of surrendering it to the enemy already is equated with a violation of IHL due to its endangering of civilian lives, then what is the average Ukrainian soldier expected to think regarding the protection of prisoners or the use of child soldiers? I would argue that currently, it is more important to sure up acceptance of existing IHL, rather than reach beyond what currently seems appropriate

The Amnesty International report has been and will likely continue to be criticised in the coming days and weeks. As already seen by the initial reactions, the vagueness and one-sidedness of the report opens it up to easy criticism. Yet, the issues of the report should be viewed within the broader context, not just of the war in Ukraine and Ukrainian or Russian violations of IHL. Rather, the report exemplifies an ongoing conflict around the limits to armed conflict. As exemplified in the most recent conflicts, even in cases where the law is clear, there remains an active debate as to whether existing laws can hold up in the case of a peer-to-peer conflict, let alone survive attempts to expand the protections even further. While human rights and humanitarian organisations’ attempts to enhance protection are admirable, perhaps the focus of attention should be on solidifying the belief in the legitimacy and appropriateness of existing IHL, rather than trying to expand the laws and interpretation beyond what can reasonably be expected from those fighting on the frontlines.