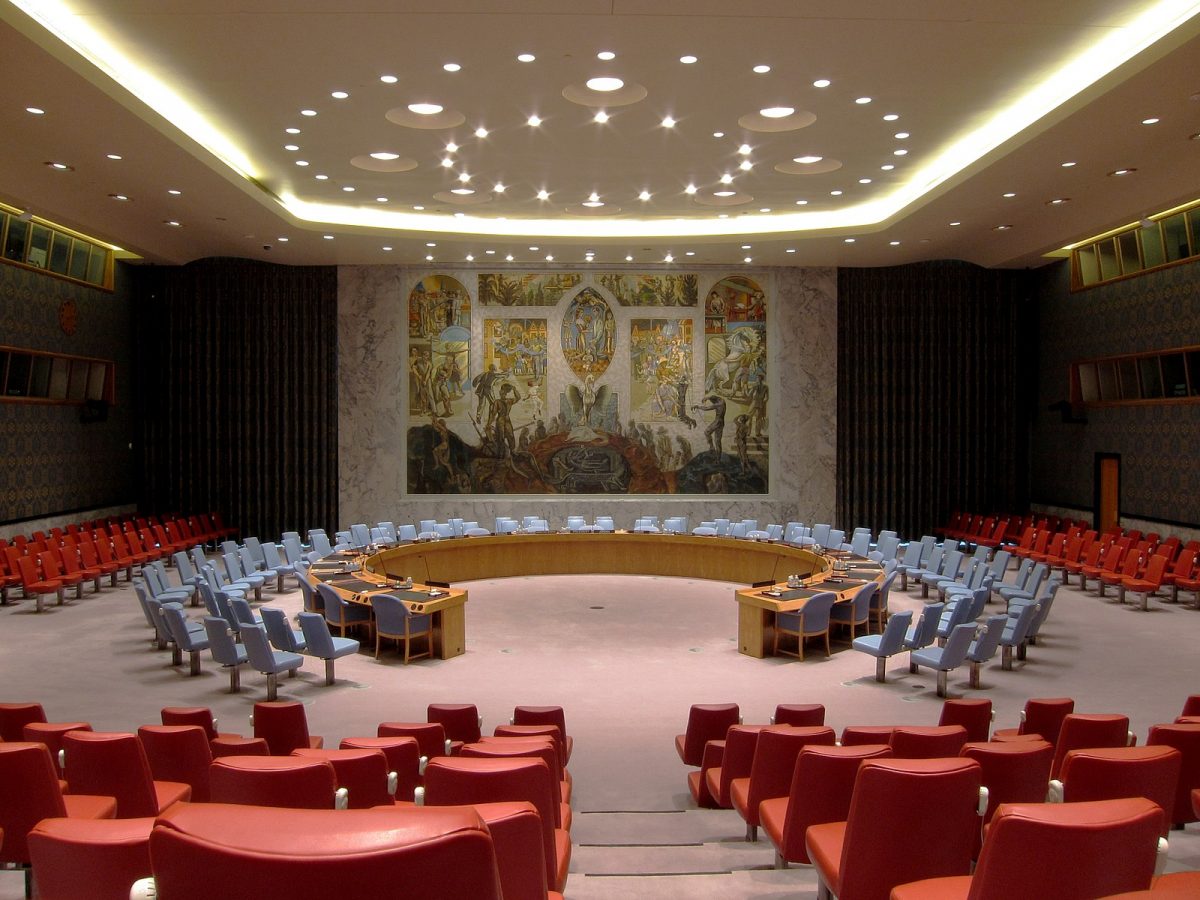 Taking stock: A review of Germany’s two years on the Security Council

Germany’s two-year membership in the UN Security Council ended on 31 December 2020. Starting with big expectations, it hit the hard realities of increasingly divisive world politics in times of a global pandemic. Nevertheless, Germany can point to some notable successes.

Every eight years, Germany applies for a non-permanent membership in the Security Council. The recent term was the sixth time that Germany sat on the Council. It had applied with an ambitious program: strengthening the women, peace and security agenda; putting the link between climate change and security squarely on the Council’s agenda; strengthening the humanitarian system; and lastly, revitalizing the issue of disarmament and arms control. It chose those four thematic issues to make its mark, besides the Council’s day-to-day business dealing with country situations. Has Germany been successful?

If Germany proudly points to “over 100 resolutions” that were adopted over the past two years, this should be put into context. In 2019, the Council adopted 52 resolutions, ­the lowest number of resolutions in six years, and a total of 67 decisions (resolutions and presidential statements), the lowest number in 18 years. 2020 saw another decline in Presidential Statements, and compared to 2019, the Council adopted only three more decisions in 2020. Moreover, the vast majority of those over 100 resolutions are on recurring country situations.

For some years now, non-permanent members have increasingly been admitted to “penholdership”, i.e. primary responsibility for drafting with regard to specific conflict-related situations. Germany took over (co-)penholdership for the country situations in Afghanistan (with Indonesia), Libya (on sanctions with the UK, including chairmanship of the Libya sanctions committee), Sudan/Darfur (with the UK), and humanitarian issues in Syria (with Belgium and Kuwait in 2019). None of them proved an easy feat. The annual renewal of the UN Mission in Afghanistan in 2019 found itself deadlocked. China threatened a veto over the question on whether or not to retain prior language that explicitly welcomed China’s Belt and Road Initiative. Also in 2019, resolutions drafted by Germany (with Belgium and Kuwait) on a ceasefire in Idlib, Syria, were vetoed, as was the extension of the cross-border/cross-line aid delivery mechanism in December 2019. Eventually, two border crossings were re-authorized at the eleventh hour in January 2020. However, in July 2020, this was reduced to only one border crossing, after protracted negotiations and several vetoes cast by Russia and China. In Libya, fighting resumed just weeks after Germany had hosted a conference on the stalled Libyan peace negotiations in Berlin. A ceasefire was ultimately reached in October 2020, with a roadmap towards elections in December 2021, but the peace remains fragile.

Some success at the country-level: the transition in Sudan

Perhaps one of Germany’s biggest achievements in terms of specific country-situations was the Security Council’s only new peacekeeping operation in 2020: the UN Integrated Transitional Mission in Sudan (UNITAMS). It was mandated in early June 2020 to support the transition process in Sudan, including constitution-making assistance and support for Sudan’s National Plan for Civilian Protection. Sudan has been a high priority on Germany’s foreign policy agenda since the toppling of Omar Al-Bashir in 2019.  As co-penholder on Darfur, Germany also objected to an immediate withdrawal of the Darfur Mission, UNAMID, and instead advocated for a smoother transition between UNAMID and UNITAMS. This transition is now provided for in resolution 2524. It is certainly no coincidence that António Guterres named a German national, Volker Perthes, as his Special Representative and Head of UNITAMS.

Media attention for the United Nations was generally low throughout 2020 – despite the world organization celebrating its 75th birthday in October. This stands in stark contrast with Germany’s first few months on the Council. These were marked by high-level political presence in New York, generating considerable media attention as well. 2019 was kicked off by the Dominican Republic, a first-time non-permanent member of the Security Council. Each month, the Presidency rotates in alphabetical order, and the country holding the Presidency – in particular non-permanent members – typically hold so-called signature events on a topic that they consider a priority. The Dominican Republic’s signature event on the impact of climate-related disasters on international peace and security aligned well with Germany’s emphasis on climate change as a topic for the Security Council and was attended by Foreign Minister Heiko Maas, the first of his several visits to the Security Council in 2019. Maas also attended an informal, Arria-formula meeting on Women, Peace and Security in the Middle East, co-organized with the United Kingdom and Peru, one day prior. Women, Peace and Security was to be the focus of Germany’s Presidency in April 2019.

French-German unity in the Council

The German Presidency itself was part of a broader effort to project European unity in the Council: in January 2019, Angela Merkel and Emmanuel Macron had signed the French-German Aachen Treaty, in which the two countries committed to “coordinat[ing] their positions [within the United Nations] closely, including as part of wider efforts to coordinate the positions of the Member States of the European Union that are also members of the United Nations Security Council” (Article 8 (1)). As part of this effort, France and Germany used their successive Council presidencies in March and April 2019 to present themselves as a “jumelage”, with a joint Programme of Work – a first in the history of the Council. Germany organized two high-level events regarding women’s rights and participation during its 2019 Presidency: first, an open debate on the role of women in peacekeeping, chaired by the then German Minister of Defense, Ursula von der Leyen (another first; no German defense minister had ever chaired a Security Council meeting before), and second, a debate on sexual violence in conflict.

Women, peace and security – one step forward, two steps back?

The debate on sexual violence in conflict drew a lot of attention, from civil society and the media, both domestically and abroad. Prominent, high-level briefers had been invited. Noble peace prize winners Nadia Murad and Denis Mukwege and human rights lawyer Amal Clooney joined the UN Secretary-General, the SG’s Special Representative on Sexual Violence in Conflict, Pramila Patten, and Inas Miloud of Libya, nominated to represent civil society by the NGO Working Group on Women, Peace and Security, as briefers. Heiko Maas had put a spotlight on the open debate and planned resolution on sexual violence in conflict through an opinion piece in the Washington Post, co-authored with Angelina Jolie, a few days prior. Resolution 2467 itself, however, almost failed, due to objections not only by Russia and China (who ultimately abstained), but also due to the United States. The US threatened to veto the resolution due to language on reproductive rights and health. As a result, the entire paragraph on access to reproductive rights and health services was deleted from the final draft. Several civil society organizations had warned against precisely such an outcome arguing that such an ambitious resolution was bound to fail in view of the Trump administration’s stance on this language.

The legal implications of the pushback on language regarding sexual and reproductive rights and health cannot be treated exhaustively here. Still, a few observations are in order. No resolution on the Women, Peace and Security agenda, including resolution 2467, is adopted under Chapter VII. This is the case for almost all thematic resolutions (with the noteworthy and much discussed exceptions of resolutions 1325 and 1540). While member states might only accept as legally binding upon them resolutions adopted under Chapter VII, so-called “Chapter VI”-resolutions can contain legally binding provisions at least for the UN system, and arguably also for member states. For example, such resolutions may create working groups or other subsidiary bodies, or impose reporting duties. More importantly, however, thematic agendas, once established, will be referenced in Chapter VII-resolutions and thus find entry into the realm of the Council’s legal activity. The Council’s thematic agendas – on women, peace and security; on children and armed conflict; on the protection of civilians – have all become “operationalized”, i.e. are now routinely referenced and made part of Security Council mandates. UNITAMS, the transitional mission in Sudan, is a good example in this regard.

It is in this light that the German effort to strengthen the Women, Peace and Security agenda has to be appraised. One important question is how the different resolutions on a thematic agenda item relate to one another: does the absence of prior agreed language signify that resolutions are rescinded in that regard? Christine Chinkin and Madeleine Rees have argued that the Council explicitly reaffirms “its commitment to the continuing and full implementation” of all prior resolutions on women, peace and security, notably including resolutions 2106 (2013) and 2122 (2013), both of which contain the contentious language on sexual and reproductive rights and health, and that therefore, despite the explicit objection to prior agreed language, these resolutions were by no means rescinded. At the same time, one might argue that in explicitly rejecting prior agreed language, member states (in this case the United States) objected to any legally binding force. However, this argument would probably only hold for those states who explicitly objected to the language, not for e.g. peacekeeping missions with a mandate to implement the women, peace and security agenda. In any event, it is up to the actors in the international legal order to make their legal position on this matter clear: as I have argued elsewhere, the decentralized nature of the international legal order makes it particularly important for states to adopt clear legal stances.

2020: Efforts in the shadow of the global pandemic

In hindsight, the extensive debate on whether resolution 2467 was progress or rather a step back pales against the challenges faced in 2020, as the Covid-19 pandemic swept the world. As early as in March, Secretary-General António Guterres called for a global ceasefire in light of the pandemic. It took the Security Council more than three months to take up this call: it adopted resolution 2532 on 1 July, the first day of the German Presidency in 2020, demanding a “general and immediate cessation of hostilities in all situations on its agenda”. Germany’s Presidency in July 2020 comprised an equal number of high-level, prominently attended meetings (via videoconference) as the 2019 Presidency. Germany held open debates on peace operations and human rights, chaired by current German defense minister Annegret Kramp-Karrenbauer, who followed in her predecessor’s footsteps; on women, peace and security with Angelina Jolie as briefer; and on climate and security, presided over by Foreign Minister Heiko Maas. But absent any formal outcome of these meetings, these meetings remained largely inconsequential. A modest success was achieved on the issue of climate and security: the open debate resulted in the creation of an informal expert working group on the topic, which held its inaugural meeting in November 2020. Whether the informal working group will succeed in placing the topic of climate and security more prominently on the Council’s agenda, given objections from several members of the Council that climate is not primarily a security issue, remains to be seen.

Towards more leadership on the international plane?

A clear-cut assessment of Germany’s two-year term on the Security Council appears impossible: global politics were too exceptional, the circumstances too unique – perhaps. At the same time, it is precisely the Council’s task to deal with exceptional circumstances of global politics. Over the past two years, this has become increasingly difficult. The Council is divided on many issues, be they country-specific or thematic. Germany took a clear stance on many controversial issues and was more upfront than in the past. One might argue that this increases divisiveness, instead of diminishing it. At the same time, it also signals a willingness to take on leadership and responsibility, a quality that has been found lacking in prior German participation in multilateral fora. It remains to be hoped that such an attitude gets translated also into increased support at an operational level for the UN’s work – both in the Council and beyond.

Hannah Birkenkötter is a Research Fellow at the Chair of Public Law and Legal Philosophy (Prof. Dr. Christoph Möllers) at Humboldt University Berlin, and currently a Global Emile Noël Fellow at NYU School of Law.