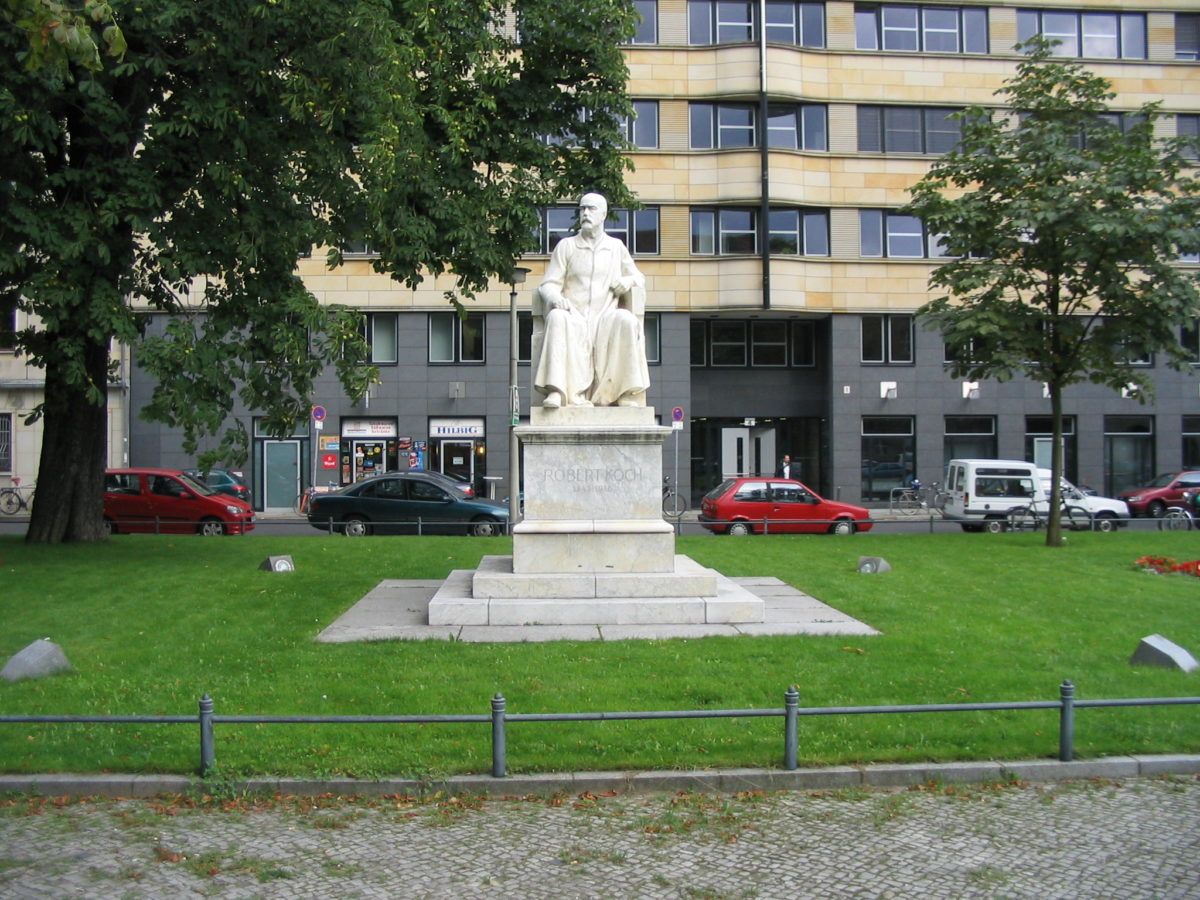 Statue of Robert Koch in Berlin near the Charité (Luisenstraße/Hannoversche Straße); photo by BLueFiSH.as via Wikimedia Commons (CC BY-SA 3.0)

Robert Koch, research and experiment in the colonial space

Or: Subjugating the non-European under the old international law

German colonialism is an inherent part of both German and global history, yet largely neglected and transcended into the vast depths of oblivion. As Jutta Blume wrote recently in an article for the German newspaper der Freitag, ‘the emergence of ‘tropical medicine’ (Tropenmedizin) is inextricably linked to the height of colonialism at the end of the 19th century’.

Considering the current pandemic and the daily briefings, which the Robert-Koch-Institute provided to the German public until recently, it is worth exploring the historical antecedents of its eponym, namely Robert Koch, a physician, microbiologist and recipient of the Nobel Prize in Medicine. The common and popular narrative is that Robert Koch established a name and reputation as a microbe hunter and crusader against epidemics. What is less well-remembered is that he was also an enabler of purportedly benevolent colonial science. In the wake of the anti-racist protests all around the world, which have even resulted in the toppling of statues dedicated to persons whose reputation and wealth are largely associated with colonialism, this article wishes to revisit the role of Robert Koch in German colonialism.

To this end, how did early international law inform colonial research and how did it contribute to the colonial expansion? This article will argue that colonial research was well-informed and supported by international law and that it was able to flourish only under its auspices, with devastating consequences for the colonised, but for the benefit of compounding the sovereignty of the German Empire and contribute to the industrial rise of it.

Third World Approaches to International Law (TWAIL) have drawn attention to how international law was entangled with the establishment of colonialism and have emphasised that colonialism has played a crucial role in the development of international law. In his famous article ‘What is TWAIL?’, Makau Mutua writes that: ‘The regime of international law is illegitimate. It is a predatory system that legitimises, reproduces and sustains the plunder and subordination of the Third World by the West.’ He furthers that ‘Neither universality nor its promise of global order and stability make international law a just, equitable, and legitimate code of global governance for the Third World.’ The colonial project depended on violence: violence was necessary in the emergence and process of empire-building. Colonialism didn’t create, it destroyed – but its representation and lasting ‘civilisatory’ legacy is still widely sanitised. Colonialism allowed and created the space for the colonisers to rule over anyone they deemed to be below their civilisational standards – it allowed to rule, to exploit resources, but also to experiment. It was already Napoleon Bonaparte with his Egypt expedition from 1798-1801 who wanted to establish that nexus between science and colonialism. That scientific fervour drove his expedition: it was not only about the domination by military force, but also the expression of ‘muscularity of universalistic Western science’.

International law gave the legal pretext to engage in exploiting the former colonies’ resources, subjugating its populations, and commodifying their bodies. Moreover, the presence of science provided the justification of colonialism. The law merely fortified the justification. The Conference of Berlin from 1884 made use of international law to “legally” divide the continent, as the colonial powers aimed to avoid conflicts, but drafted “civilised” rules to suit their imperial phantasies. Hence, the ‘1885 Act of Berlin gave European powers the legal right to claim new land in Africa – any empire that already possessed land along the coast got first dibs on occupying the hinterland behind that coast’.

Against this backdrop, a closer examination of Germany’s colonialism is warranted. It was rooted in ‘Weltpolitik’, an approach for the pursuit of hegemony. In light of the ever-expanding empires of its European neighbours, the German Reich entered the colonial race in different parts of the world, despite earlier reluctance. Driven by social-imperial goals and also colonial competition, the German colonial empire eventually arrived in Africa. To this end, Berman writes: ‘Rather, the primary motivation to establish an overseas empire was parity with other colonial powers, specifically the competition but also the imitation of Great Britain. … [T]he German colonial discourse possessed an imitative, epigonic character’.

The colonial parity that Germany wanted to achieve was then corroborated by science and medicine, as they were ‘constitutive in the sense that they functioned not merely as a ‘tool’ for a project already imagined, but as a means of conceptualising and bringing into being the colonial project itself.’ The colonial project, for the German Reich, was justified by the fight against tropical diseases. The German colonial press used the term combat (Bekämpfung) in a mode of belligerency. In the colonial space and time, almost everything became an enemy to be combated, starkly resembling the current atmosphere in the face of fighting the Covid-19 pandemic. Thus, viruses and bacteria became ‘invisible’ enemies – enemies to be combated through colonial domination. The new German colonial power required collaboration with a broad range of sciences to construct an efficient colonial economic infrastructure. The aim was to work on the efficient exploitation of the colonies’ resources and seizing upon the workforce of the colonised. For this, however, the German colonial empire required scientists to gather information: information on people, countries, resources, travel routes, and settlements.

It is against this background that Robert Koch wished to escape the domestic competition and also failures in the old world. Tropical medicine was a welcome stage in enhancing a career at the time of German colonialism. Medicine, however, was one of the crucial ‘tools of empire,’ just along with ships and machine guns. And Robert Koch became a valuable agent of the colonial endeavour. This dialogue on international law, colonialism and science is even more dynamic when racial ideas are being discussed – if not systematic racism, as it triggers inevitable questions to unearth between Europe and its colonial worlds.

The practice of colonial science subjected the colonised to early death. Colonial science – which justified the presence of colonialism – enabled international law to sacralise the hegemonic domination. Colonial science, in this vein, allowed the death of the colonised subjects to be of value to the colonial presence and gave the immediate scientific input for social control in the rapidly emerging industrial areas of Germany in order to control the spread of diseases. Robert Koch was helping with his scientific fervour to solidify international law, as science nourished and justified Germany’s colonial endeavour and the construction of health infrastructure in Germany.

Therefore, to sustain and support the home population, colonial science of bacteriology allowed geographical and physical intervention. Bacteriology, to this end, was ‘imbued with a civilising mission’ and Robert Koch not only supported imperialism, but also predisposed bacteriology to racist reconfigurations for the imperial project, which was facilitated by international law.

Colonial science as the markers of empire

First, colonial science was the extension of European nationalism – science fed the lifetime of empire and even became an empire in itself, as it was infused by nationalism, authority, and modernity.  Second, colonisation needed justification. After all, it was based upon violent conquest and a brutal police system. The justification for the raison d’être was validated by its operational working methods: science. Third, science created the favourable conditions for a healthy workforce that could exploit its own resources for the plundering by its coloniser. Robert Koch operated within this specific context, as he carried out his experiments and colonial ‘science’: he travelled and settled by Lake Victoria with his expedition team in 1906. Robert Koch was the dominating scientist in the creation of a biopolitical continuum in the nascent German Empire. His biopolitical interventions through science engendered othering, deprived human beings of their agency, as the body of the colonised became the field of experimentation, reduced to its social and economic value. As he was there, his team carried out tests using Atoxyl to treat sleeping sickness among the native population. Atoxyl, however, was used in its full dose, despite knowing that it caused poisoning, blindness, and even death. As the indigenous people returned to the villages in light of the health improvements, colonial police was sent out to arrest and bring them back to concentration camps to continue the medical experiments. His idea was to isolate them from the villages to lower infection rates – but also to continue experimenting, with all the necessary force to sustain the workforce. Aimé Césaire correctly held that the process of dehumanisation by the coloniser in his colonial actitivity is based upon the premise of contempt for the native and changes the very nature of the coloniser himself. While treating the colonised as an animal, the coloniser turns himself into the animal. The objects of the experiments were the colonised, their bodies subjected to biopolitical intrusion, their health brutalised in concentration camps like animals, deprived of their free will. Thus, colonial science created scientific value from incarceration and even murder.

The experimental science, as outlined earlier, also served to support and draw conclusions for a healthy workforce in an effort to sustain the process of industrialisation in Germany and to avoid social unrest. Hence, Robert Koch’s science was not only driven to further his own career, as the boost in recognition thrived on the control of workforce in Germany, but also in the colonised land to compound imperial expansion, tame social unrest, and amass wealth.

The destructive will of colonial science was the perpetuating and legitimating agent of the colonial project. Robert Koch, to this end, was the wilful administrator, driven by his careerist impulse. As Frantz Fanon stated: ‘With medicine we come to one of the most tragic features of the colonial situation. (…) for the colonised interprets this medical injunction as a new form of torture, of famine, a new manifestation of the occupant’s inhuman methods.’ German medical science, in this context, had historically subjugated the colonised, brutalising their bodies and depriving them of their dignity.  Colonial science, expounding upon the colonial framework, created and assisted in racial hierarchy. Robert Koch is not only the eponym for an institution which is prominent in the current pandemic. Robert Koch is, moreover, the harbinger of colonial suffering, while his scientific glory is stemming from colonial humiliation in order to support the rise of the ‘benevolent’ despot, the German Empire.