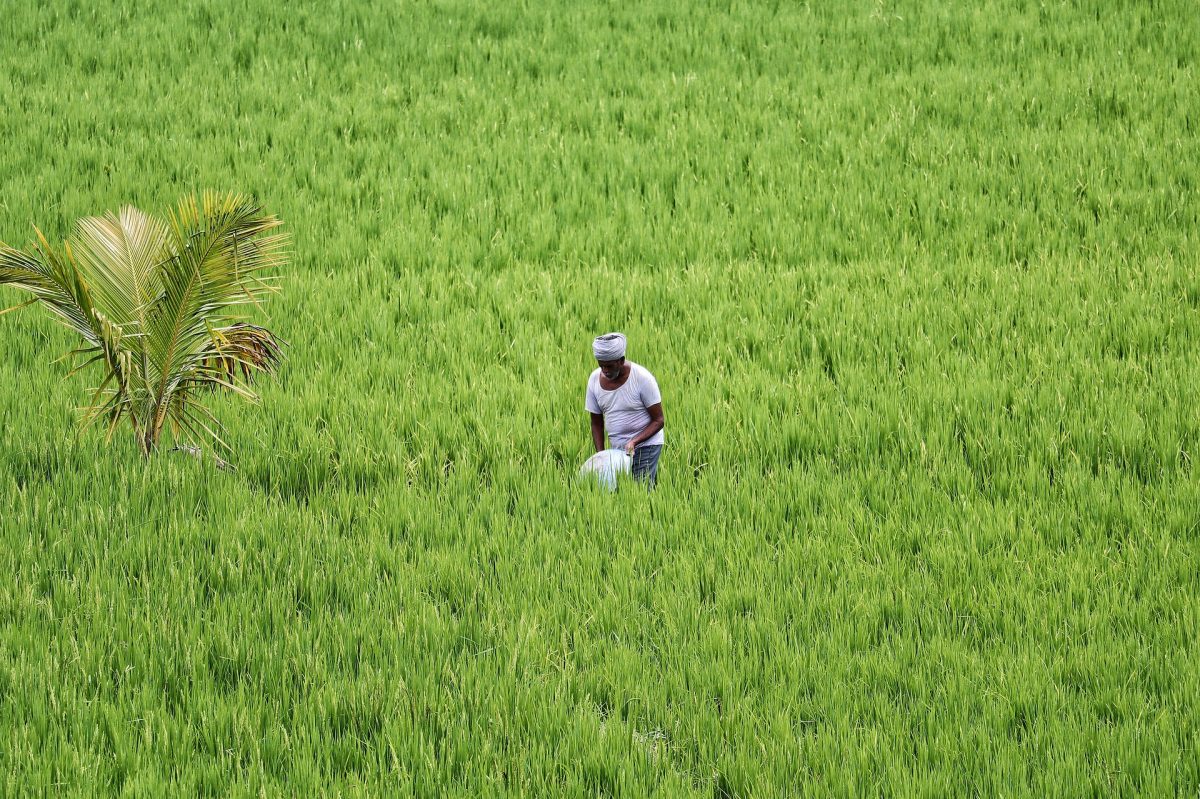 Picture by Thomas G. via Pixabay.

“We are food: we eat food, we are made of food, and our first identity, our first wealth, our first health, comes from the making, creating, giving of good food.” (Vandana Shiva)

For months, millions of Indian farmers have protested the Indian central government’s 2020 farm bills that fundamentally change the country’s food systems. The bills came into force on 27 September 2020 and are meant to reduce public interventions in the agricultural sector, to remove trade barriers and to invite private sector investment. The bills affect not only India’s farmers who constitute 43% of the country’s workforce, but also food security in India.

In addition to the farmers’ mass protests in the nation’s capital, Prime Minister Narendra Modi’s government also faces resistance to their farm bills from some of the country’s state governments, with the Kerala legislative assembly being the first to announce that it will not implement them and to challenge their constitutionality. An interim order by the Supreme Court of India temporarily staying their implementation has not appeased protesters. To the contrary, tensions have escalated since. To explain why the farm bills have triggered such profound resistance, this piece will take a legal perspective to outline how they will restructure Indian food production.

Under the Indian constitution, the agricultural sector lies within the competence of states. Despite many reforms, the Agricultural Produce Market Committee (APMC) yard sale system is still prevalent. Under this system, farmers must sell their produce on market yards run by each state’s APMC from where it is then sold on to food traders and processers. APMC market yards are essentially closely monitored and not overly competitive wholesale markets with transparent pricing which is often based on the produce’s government-set Minimum Support Price (MSP). This system benefits and protects small-scale farmers (for more detail, watch this). Under this system, they are not contractually bound to any particular trader but sell their produce by auction. This safeguards them against abusive bondage contracts and is meant to prevent price dumping by larger agribusinesses that can produce at a lower cost than them. Furthermore, to prevent market-induced price fluctuations for essential food items, the amount that a corporation can stockpile is capped.

In the last two decades, the APMC system weakened. As Prof. Himanshu notes, out of the 36 Indian states and territories, 18 states have introduced commercially-run wholesale markets for the first sale of farm produce, 19 states permit direct sales bypassing the auction process completely (so-called sales at the farm gate) and 20 states allow contract farming. While the APMC system is certainly not perfect and has not prevented the severe impoverishment and indebtment crisis of rural communities, farmers in states where the APMC system is in place earn more than farmers in states where it effectively no longer exists.

The 2020 farm bills will hollow out this system by eliminating many of the institutional safeguards of the current system and by creating a parallel one, which is entirely market-oriented. The Farmers’ (Empowerment and Protection) Agreement on Price Assurance and Farm Services Act introduces contract farming nation-wide. This can either take the form of trade and commerce agreements, which tie farmers to one buyer, or it can take the form of production agreements. Under such agreements, farmers contract out the labour and land. The Empowerment and Protection Act has no pricing transparency requirements. It only recommends that pricing should be oriented after MSP and APMC produce prices. To some extent, the act acknowledges the manifest power imbalance that is at play in contract farming by prohibiting for instance contractual clauses that result in the transfer of land titles. The act also stipulates that any disputes arising from such farming agreements should be settled outside the judicial system, either through conciliation, or with the help of local officials.

The Farmers’ Produce and Trade Commerce (Promotion and Facilitation) Bill lies the foundations for a competitive national agricultural market. It removes any restrictions on inter-state and intra-state produce trade and permits commercial electronic trading and transaction platforms. This law is not only controversial because it creates parallel and purely market-oriented agricultural trade venues that will put price pressure on the APMC market yards, but also because the bill challenges the regulatory authority of state governments. It gives the central government the sole competence to regulate virtual trading and also provides for a dispute settlement system outside the state judiciary.

Finally, the Essential Commodities Amendment Ordinance limits the scope of government intervention into the pricing, storage and trade of many essential food items, such as cereals, pulses and potatoes. Under the 1955 Essential Commodities Act the pricing and storage of such items is subject to a number of measures meant to ensure their availability and accessibility. The Essential Commodities Amendment eliminates all storage limits and restricts government price interventions to extraordinary circumstances such as natural disasters. The concern is that this amendment will invite speculations on such essential items and threaten their accessibility to the poor.

Petitions to the Indian Supreme Court (Bhartiya Kisan Party vs. Union of India & others) have challenged the constitutionality of all three farm bills. The petitioners claim that their adoption violates the regulatory competence of state governments; that they were adopted in an arbitrary manner; that they violate substantive and procedural fundamental rights and; that their dispute settlement mechanisms hinder access to justice. The unanimously adopted resolution of the Kerala legislative assembly echoes these concerns underlining that the central government overstepped in its competences. In remarkably stark language, it reminds the Modi government that the pandemic has already pushed small-scale farming communities to their limits, and that they could simply not tolerate any additional strains.

In response to the petitions, the Supreme Court issued an interim order (Rakesh Vaishnav vs Union Of India) temporarily staying the implementation of the 2020 farm bills. The order also installs an expert committee to review the bills and to submit policy recommendations. It jointly responds to petitions challenging and supporting the farm laws as well as petitions asking for a court-mandated stop to the protests in order to protect Delhi citizens from their disruptions. The court reasoned that while it “may not stifle a peaceful protest”, its “extraordinary order of stay of implementation of the farm laws will be perceived as an achievement” and therefore lead farmer unions to encourage their members to end their protests.

The recent storming of Delhi’s iconic Red Fort shows that this reasoning backfired, which is unfortunately not surprising. The interim order identifies farmers’ “hurt feelings” and the bills’ rushed adoption process as reasons for the protests. It buys into the argument that misinformation misled farmers into thinking that the bills will harm them and that they could be dissuaded from their resistance if the bill’s benefits were communicated better to them. The purpose of the expert committee is therefore to “create a congenial atmosphere and improve the trust and confidence of the farmers”. It composed its four-member expert committee accordingly. Ashok Gulati is a vocal advocate of export-oriented liberalization and publicly supports the farm bills. Anil Ghanwat has also gone on record arguing that the farm laws do not go far enough in protecting the agricultural sector from government intervention and Parmod Kumar Joshi considers that “[s]crapping the three farm laws will be disastrous for the entire agriculture sector”.

Their vision for India’s rural communities is well summarized in an article by Prof. Gulati on the impact of liberal globalization on small-scale farmers. He admits that liberal globalization processes have hurt small-scale farmers in the past, but argues that this could be addressed through corrective government policies. Enabling policies should remove any obstacles for small-scale farmers to exploring the opportunities of globalization and coping policies should minimize globalization’s adverse impacts on them. Enabling policies include for instance removing credit constraints and reducing transactions costs and coping policies are e.g., promoting opportunities in the rural non-farm sector (exit options), competition and technology. On other occasions he has also argued that a fundamental reform of the agricultural sector was necessary in order to attract the private investment necessary to make India agriculture more competitive and better integrated into global food supply chains. Prof. Gulati’s impressive publication record certainly attests to his expertise, but also to the belief which has shaped it, namely the belief in food capitalism as it is codified in the WTO’s Agreement on Agriculture. This agreement peruses to establish a market-oriented agricultural trading system, by reducing domestic support and protections, which correct or distort world agricultural markets.

It is unfortunate that the court mistook informed dissent for misinformed agitation, as the challenge to food capitalism is not less supported by expertise than the belief in it. Anna Chadwick for instance demonstrates food capitalism’s catastrophic effects on hunger in the context of the 2007/2008 global crisis and the recent report of UN special rapporteur on the right to food finds that it has neither delivered adequate trade results nor food security. It proposes to replace the Agreement on Agriculture with rights-based food systems, structured by international food agreements which are not cantered on profit, but also on respect for land and agricultural workers and which aim to ensure food security. The report advocates for accepting human dignity and not economic growth as the core value of agriculture and highlights the limits of food capitalism in responding to global hunger or climate change. Finally, an earlier report of the special mandate on the right to food focussed specifically on agricultural workers underlines how globalized food capitalism has exposed and marginalized farm labour.

India’s farmers, it seems, are no longer only protesting the farm bills. They are protesting India’s complete and unconditional absorption by global food supply chains. They are protesting for their dignity, their identity and to have their political subjectivity recognized and respected. What is taking place on the streets of Delhi is the rejection of market patriarchy and an insistence that experience is more persuasive than expertise.

This post also appears on the author’s blog Riches and Laws.