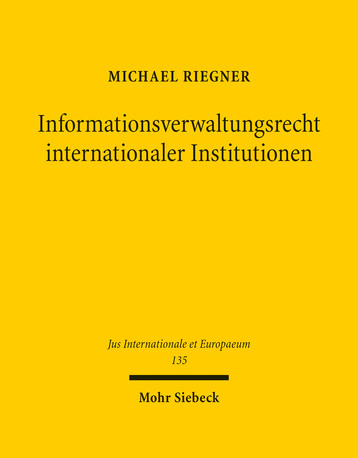 Governing the world through information (law)

Knowledge is power – power is knowledge. While this nexus certainly is a commonplace in the critical sociology of knowledge, it may actually never have been more topical than today. With the dramatic increase of (digital) communicative interactions within and beyond national boundaries, ‘information’ has become available in an absolute inflationary manner. This is also reflected in everyday discourse: The German Gesellschaft für deutsche Sprache (Association for the German Language) chose ‘Big Data’ in 2014 (2nd place), ‘Blockchain’ in 2017 (2nd place) and ‘Fake News’ in 2016 (1st place) as the ‘Anglicism of the Year’.

While floods of information may appear as purely technological phenomena at first sight, they are actually highly political: both in domestic and inter-/transnational affairs, they generate new cognitive and normative ‘zones of uncertainty’, to borrow this term from organizational sociology. For it is controversial and contested which information, statement or data set will prevail in processes of knowledge production (as the current Covid-19 crisis underlines again). In other words: To the extent that individuals, states and inter-/transnational actors are increasingly becoming objects as well as subjects of information collection, the question arises which legal norms regulate and structure these processes of governance.

Setting the scene: A legal order and its contextual plurality

Thus, the core objective of Riegner’s systematic and reflective pioneer study is to sketch the legal contours that structure global information governance. Riegner’s central thesis is that the international institutional law of information constitutes an already existing, but not yet systematically treated system of norms regulating the information activities of international institutions. While it comprises a plurality of structures, actors, legal sources and regulations, according to Riegner, this plurality results in a whole constituted by general principles – with informational cooperation, collective informational self-determination, and individual informational autonomy being the three core principles. Focussing on regulations directed at real acts, the author is interested in a legal field, which is particularly susceptible to politicization. Processes of international knowledge production are therefore rightly at the centre of this book.

The politics of Informationsverwaltungsrecht internationaler Institutionen

Riegner emphasizes the qualitative change in information governance of international institutions: Whereas institutions used to rely primarily on data supplied by NGO and states, they are now able to collect data themselves and thus foster their ‘international cognitive authority’. IntILI is not given, we learn. Rather, it is as a co-constitutive element in the process of knowledge production itself: according to Riegner, law actually has a cognitive effect insofar as it co-constructs ‘facts’.

Accordingly, innovations in information technology are, in a certain dialectical sense, accompanied by historical innovations in their politicization and legalization. For readers with an interest in the history of international law, not only is this new development in the connection between law, politics and information technology highly fascinating; Riegner also outlines the historical roots with reference to post-colonial research. Here, the reader learns about the ‘early marriage of international law and statistical knowledge’ in the context of the League of Nations and the International Labour Organization after World War I.

What makes Riegner’s book particularly worth reading is its critical reflections on the (emerging) law of information. Informed by various approaches from different disciplines – including IR-research on global governance, critical legal theory and sociology of knowledge –, the author points out that international law of information both is an instrument of emancipation and of domination. Once again, progress and regress appear as two sides of the same coin in the modern discourse of legalization.

The struggle for information law, or: Who is controlling the controllers?

This high politicizability of international institutions’ public authority in the field of information law is exemplified by Michael Riegner mainly with reference to the World Bank and the United Nations Development Programme (UNDP). The example of the UNDP’s Millennium Development Goals and Social Development Goals is interesting as it exemplifies the pitfalls of a data-based quantification of the world. While it may appear helpful for international institutions in order to establish comparability between states, this desired standardisation at the same time displaces country-specific and context-dependent methods and statistical deficits. Indeed, it does not do justice to the multi-layered poverty experiences of those affected.

A particularly important case in the book is the ‘Doing Business’-Index of the World Bank, which the author has described in more detail on this blog. This example, inter alia, illustrates how indicators can affect processes of standard setting, decision-making, and contestation in global governance. ‘Doing Business’ has been comparing economic regulation since 2003 and evaluating it in terms of economic efficiency. According to Riegner, the ranking has also to be criticized for methodological reason, it also has political consequences: For instance, in order to achieve better results in the ranking, in 2006 Georgia restricted collective and individual labour rights. From a transnational work sociological perspective, it may not be implausible to understand these indicators as an expression of recent trends of neoliberal deregulation policies as the International Labour Organization (ILO) and trade unions have claimed.

The example of ‘Doing Business’ perfectly illustrates that the institutionalisation of information does not necessarily lead to its depoliticization, but rather to plural legal approaches and institutional oppositions: the ILO saw in the indices of ‘Doing Business’ not only a deregulating agenda against the criteria of its own ‘Decent Work’-Index, but also a violation against binding ILO conventions, that is against international law. According to Riegner, the cognitive authority of Doing Business has in many cases proved to be a more effective incentive than the steering power of international law, showing that statistical indicators transport social and political conflicts. With this, Riegner supports Michael Zürn’s thesis that global governance points to a pluralization of governance actors.

Moreover, he emphasizes the importance of legal containment of ‘governance by information’ constructed by processes of knowledge production such as ‘Doing Business’. Thus, I understand Riegner’s plea for a stronger interest in IntILI also as a plea to define processes of knowledge production in international institutions as a struggle for international law (to refer to Rudolf Jhering here). But, of course, this turn to positive law is a normative and political choice in itself, as i.e. Benedict Kingsbury has highlighted with reference to Lassa Oppenheim – there is no escape from politics into law. In this very sense, the IntILI – as any international legal project – is a normative or even political project sui generis. It ultimately serves purposes outside the law (albeit linked to it): emancipation, democracy, freedom, humanity, solidarity, self-determination, to name just a few. Not only is law co-constructing the ‘facts’, but our scientific view of these processes is a separate knowledge production process in itself.

Points of departure: Towards a global information order

So if we admit to ourselves that the turn from politics to legal norms of IntILI ultimately just means to shift the political process on another level, then the question arises: what is to be done with this project? For Riegner, the central task of IntILI is to provide organizational forms, procedures and standards that both work towards an appropriate exchange of information and knowledge in international multi-level structures. He strives for a legitimating legal framework in which the exercise of power, self-determination and the reconciliation of interests in a politically secure context make economic and cognitive asymmetries impossible. In this context, it is also a matter of improving the hitherto neglected informational legal status of the individual in institutional international law. Riegner’s approach seem convincing to me. It highlights the strong contextual dependence of knowledge and its legal significance in global governance.

As Riegner suggests, analytical analogies can also be drawn beyond the cases of international development institutions, and I agree. One example from my own research (conducted together with Carmen Ludwig) studied the access of African workers to information along Global Value Chains, in particular, with regard to European Works Councils (EWC) as institutionalised workers’ representations. The EWC’s core task is precisely the exchange of information between employees – this right to participation can also account for employees based in Africa, if the corresponding European company unit includes plants in African states. However, in ethnographic field research conducted in South Africa and Morocco, Ludwig and I witnessed that global companies were vehemently denying African and other non-EU members the legally permissible participation in European Works Councils (see our chapter in the book edited together with Alexander Wagner).

In other words: The global cosmopolitan law of transparency and information, which Riegner et al. rightly highlight with a view to international development institutions must be demanded and enforced even more decisively in other policy areas, e.g. as basic rights of industrial citizenship.  Law alone, however, will not be enough to achieve progress in this field. Political pressure and solidarity are needed, as Riegner’s take on the ‘Doing Business’-Index underlines. Much in this sense, Riegner concludes that looking at processes of knowledge production through the lenses of IntILI provides an interesting perspective not only on the law of development institutions, but also on international institutional law more generally. By emphasizing that not only knowledge, but also law in processes of knowledge production constitutes power, Michael Riegner has not only stressed that a transparent global legal order of information is needed; he has also made an important contribution to reconstructing it in legal terms.

Hendrik Simon is a lecturer and scientific researcher at Goethe University Frankfurt.