On the groundbreaking first trial addressing genocide against Yazidis

Six years after the so-called “Islamic State in Iraq and Syria” (ISIS) began persecuting and annihilating the Yazidis, an ethno-religious minority group in Northern Iraq, the first trial of its kind addressing genocide against the group commenced in Frankfurt am Main on April 24, 2020. While the world is focusing its efforts to contain the COVID-19 pandemic, the Frankfurt judges are avidly going forward with the case against Taha Al J., showing their tenacity of what could mark the beginning for Yazidi’s long-awaited prospects for justice.

After giving some background on the atrocities committed against the Yazidis, this two-part Bofax analyses why Taha Al J.’s trial represents an important commitment to international justice, why it has been challenging to prosecute cases addressing the genocide against Yazidis, and why such cases are rarely referred to the International Criminal Court (ICC).

ISIS atrocities against the Yazidis

In August 2014, ISIS attacked the Yazidi villages in the Sinjar region in the northern part of the Kurdistan Region of Iraq. It is estimated that around 5,500 Yazidis were killed and more than 6,000 were kidnapped in that month. The Yazidis worship a peacock deity – Tawusi Malek – as their guiding spirit. ISIS claimed that Tawusi Malek is identical to the Qur’anic Satan and justified killing and enslaving the minority group on distorted Islamic texts. The genocide committed against the Yazidis has not only primarily been accomplished through mass killings, but also by committing crimes with the overall objective of destroying the religious minority, in whole or in part, as envisaged by the drafters of the 1948 Genocide Convention and now reflected in Art. 6 of the Rome Statute.

The case of Taha Al J.

Taha Al J., a 37-year-old Iraqi man, appeared before the Higher Regional Court of Frankfurt (Oberlandesgericht) on Friday April 24, 2020 facing multiple charges. In the summer of 2015, he bought a Yazidi woman and her five-year-old daughter from an ISIS fighter. The purchase and subsequent enslavement by the accused took place in his house in Syria which he shared with his wife, Jennifer W., a German national. Both kept the Yazidi woman and daughter as slaves, provided them with insufficient food and prohibited them to practice their religion. One day, Taha Al J. and Jennifer forced the child outside – tied her to a window unprotected from a 50° Celsius weather – as a punishment for wetting the mattress. As a result, the child died from thirst and pain. Taha Al J. was arrested in Greece in May 2019 and extradited to Germany in October 2019. His trial is expected to last until August 2020.

The indictment: Germany’s exercise of universal jurisdiction over international crimes

Besides other charges under the German Criminal Code, including murder (§ 211, § 129b (1) in connection with § 129a (1)) and human trafficking (§ 233 (1) (1), (3), § 232 (3) Nos. 1, 2 old version), Taha Al J. is charged with crimes under the Code of Crimes Against International Law (CCAIL) – the 2002 implementation of the Rome Statute into German criminal law. The charges include Crimes against humanity, § 7 CCAIL, war crimes § 8 CCAIL, and genocide, § 6 CCAIL. For the latter charge, the Court will have to determine whether Taha Al J. personally had the specific intent to destroy, at least in parts, the religious group  of the Yazidi when he let the child die – even though ISIS has openly declared their aim to destruct the Yazidi and the Independent International Commission of Inquiry on the Syrian Arab Republic set up by the UN Human Rights Council came to the conclusion that “ISIS has committed the crime of genocide as well as multiple crimes against humanity and war crimes against the Yazidi“.

The CCAIL provides Germany with a framework for exercising universal jurisdiction. Under the principle of universal jurisdiction, Germany can prosecute the limited number of crimes contained in the law. Thus, § 1 of the CCAIL states that the law applies to all offenses against international law listed under § 6 to §12 and requires no nexus to Germany. Questions of the nationality of perpetrators or victims are important only for prosecutorial discretion. The ratio behind the principle of universal jurisdiction is that all states should be able to possess jurisdiction to prosecute those crimes that are “universally considered heinous and repugnant” (Bantekas, para. 22).

By exercising universal jurisdiction, German regional courts can make a meaningful contribution to international justice, not least by setting an example for other domestic and regional legal systems. Given the failure of other actors to prosecute ISIS crimes against the Yazidi, discussed in the next part of this Bofax, such national efforts are particularly valuable, as long as they are in line with international law, and perhaps the only way to bring the perpetrators to justice. (See for (the limits of) universal jurisdiction under international law, Bantekas, paras. 22-29).

The case of Taha Al J. marks a vital step towards international justice. It is a rare case of the exercise of universal jurisdiction and marks the first trial of its kind to address clearly and specifically crimes against the Yazidi minority which included genocidal acts and crimes against humanity. Lastly, Taha Al J. ’s case proceedings could increase pressure on other states to follow similar leads in the future.

Challenges for domestic and international jurisdictions

While several trials involving ISIS are underway in Iraq and Iraqi Kurdistan, they mostly deal with charges under anti-terrorism legislations and none of them addresses genocidal acts against the Yazidis. To address genocidal acts, Iraqi courts would require more extensive investigations and documentations. On all cases involving ISIS persons, Iraqi judges prefer to implement the Iraqi Anti-Terrorism Law No. (13) for the years 2005 to criminalize membership in a terrorist organisation and ensure state sovereignty. For example, the infamous case of Ashwaq Haj Hassan marked the first case in Iraq in which a Yazidi victim personally confronted her ISIS attacker, Mohammed Sahab, an Iraqi national. He was found guilty of participating in a terrorist organization and in the rape and abduction of Yazidi women. Similarly, last year, an Iraqi court addressed terrorism charges to seven ISIS French citizens. In both cases, the accused were found guilty of terrorism charges against the state. None of the cases, however, referred to the atrocities against the Yazidis as acts of genocide.

Furthermore, collaboration efforts regarding ISIS cases between the Iraqi central government and the Kurdish Regional Government (KRG) remain unorganized and often complicated by politics. Given that some of the offenses occurred on the disputed areas between the Iraqi government and the KRG, while other offenses occurred on areas controlled by one of the respective governments, such a collaboration would be vital. Although the KRG has been collecting documentations against ISIS for years and has established a special investigative committee on genocide, they have limited access to ISIS perpetrators, who remain in the custody of Iraqi security services. On the other hand, Iraq’s central government has established the Iraqi Investigative Independent Team (IIIT) based on the request of the UN Secretary-General in the UN-Security Council Resolution No. 2379 to support efforts to hold ISIS accountable, in which the KRG has no say given the requirement of the respective resolution reaffirming Iraq’s sovereignty and territorial integrity.

Moreover, it has been challenging to secure adequate evidence and reliable testimonies from Yazidi victims despite the fact that many of them know their tormentors’ names. Survivors would undoubtedly take comfort in seeing ISIS persons prosecuted, but the fear of retaliation against them or their family members, the traumatization to narrate their stories again, and fearing stigmatizations and shame from their community hinder the attesting process. The high mobility of ISIS fighters in the region poses another challenge. Fighters either went back to their country of origin, were killed in battles or traveled to third countries making it difficult to establish adequate evidence.

Regarding potential ICC prosecution, most ISIS genocidal acts against the Yazidis and crimes against humanity took place in Iraq and Syria. The ICC has no jurisdiction over neither of them because neither Iraq nor Syria have ratified the ICC Statute. The ICC could, however, exercise jurisdiction over these crimes, if the UN-Security Council referred the cases to them. The latter submitted a draft in 2014 which was supported by 13 members to investigate war crimes during the conflict in Syria. However, Russia and China vetoed the draft.  As a result, the referral efforts to the ICC were blocked.

Given these impasses on the regional and international levels, could other states follow the German example and prosecute ISIS members for crimes committed against the Yazidis? This depends on the respective implementation of universal crimes into the national legal order of the state in question. Similar to Germany, Austria has shown that it is proactively willing to exercise universal jurisdiction over international crimes, including torture, genocide, crimes against humanity and war crimes. One of the most high-profile Austrian cases in this regard was the case of the Syrian, Brigadier General Khalid Halabi, who was granted asylum in Austria and was later identified by one of his victims in May 2018 in a refugee camp in Vienna. As a result, the Austrian authorities opened an investigation in his case. For other states, this might not as easily be possible. France, for example, applies universal jurisdiction only under specific circumstances. Although having conformed its criminal code to the Rome Statute in 2010, France can exercise universal jurisdiction merely if the suspect is present on French soil and when the crime is also punishable under the jurisdiction of the state on whose territory it occurred. Such specificity is deemed to hinder the mandate of universal jurisdiction over transnational crimes.

Overall, German courts have dominated international headlines this year over their commitment and tenacity for justice and skillfully handling the interface between universal jurisdiction and crimes against international law. Recent examples are the cases of the former Syrian Intelligence Officer whose trial started on April 23, 2020 to systematically address torture in Syria, the case of Omaima A., a German-Tunisian woman who is accused of crimes against humanity in Syria and Iraq and went on trial in Hamburg on May 4, 2020. These trials at German courts, although marking six years after ISIS began persecuting minority groups and eleven years since the start of the Syrian conflict, show the whole world that the accountability to prosecute perpetrators extraterritorially and prevent impunity can after all prevail, even if takes one domestic court at a time.

Mais Masadeh is a Ph.D. candidate at the Institute for International Law of Peace and Armed Conflict (IFHV) at Ruhr University Bochum. Currently, she is working with female Yazidi survivors of the Islamic State who got resettled in Germany to understand how they negotiate their arrival and build resilience in post-conflict settings. 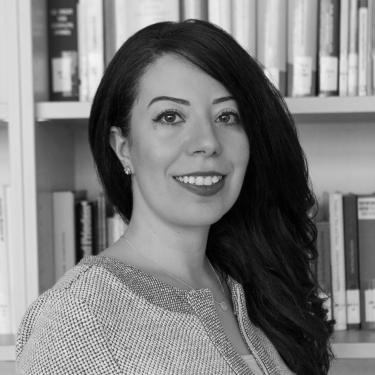 Mais Masadeh is a DAAD Doctoral Research Fellow and a Research Associate at the Institute for International Law of Peace and Armed Conflict (IFHV), Ruhr-University Bochum, Germany.