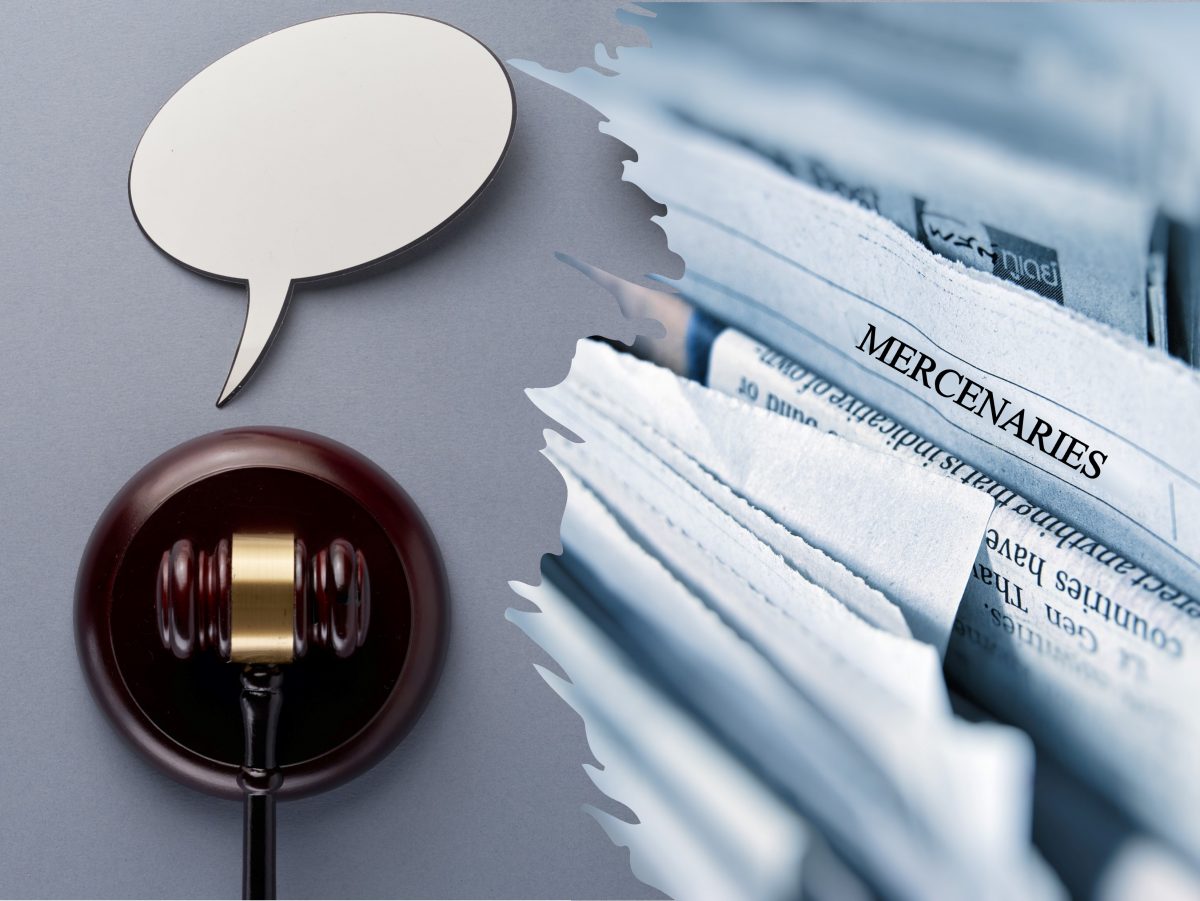 Picture based on photos by AbsolutVision and eskay lim on Unsplash.

A Case for the Reintegration of Legal Terminology and Popular Parlance

Much like the invasion of Iraq did two decades ago, the attack on Ukraine has yanked legal terminology and arguments from international law to the public forum, prompting legal academics to reprimand media outlets (Talmon and Dürr) and reviving some of the debate on the relationship between international law and public opinion (Völkerrechtspodcast). Far beyond the scope of the Ukraine conflict, one area where public debate and legal definition contrast particularly sharply is the use of mercenaries.

Mercenarism seems to have rapidly spread over the last few years, at least as far as the public debate is concerned: The media recently reported on Russian mercenaries in Mali, Ukraine, and the Central African Republic, Israeli mercenaries in Cameroon and Ukraine, and Syrian mercenaries in, again, Ukraine. While media reports and governments (e.g. here at 0:56) regularly label irregular fighters or employees of Private Military and Security Companies (PMSC) ‘mercenaries’, the legal definition Art. 47 of the Additional Protocol I to the Geneva Conventions (API) offers is so narrow that anyone “who cannot exclude himself from this definition deserves to be shot – and his lawyer with him!” (Best, p. 342). This post will reexamine international law’s definition of mercenaries in light of the diverging public use of the term and attempt to reconcile the two.

A Brief History of Mercenaries

In the absence of the concept of the nation state and regular armed forces, the Carthaginian (p. 507) and the Roman Empire relied on mercenaries to wage wars. Using mercenary services was a common, not frowned upon, practice. Although mercenarism is said to be the second oldest profession, mercenaries were neither internationally defined nor explicitly regulated for a long time. Art. 17 of the 1907 Hague Convention (V), for example, stipulates that neutral persons lose their status when “commit[ting] acts in favor of a belligerent”, but “shall not be more severely treated” than other belligerents. In fact, mercenaries were traditionally treated as prisoners of war (POW) upon capture (Fooks, pp. 28-29), instead of being singled out as a separate legal category with (seemingly) less protection.

From the 1870’s until the 1960’s, mercenary activity remained strikingly low (Percy, p. 372). As a result, mercenaries were seen as abnormal and objectionable when their use by ex-colonial powers and newly independent states (for examples see Kwakwa, pp. 75-76) rapidly increased on the African continent during the 1960’s wave of decolonization. In 1968, the UN General Assembly, for the first time, but without legal effect, declared the “practice of using mercenaries against movements for national liberation and independence […] a criminal act and […] mercenaries […] outlaws,” (here, para. 8). The new upsurge of mercenary activity led to a strong anti-mercenary social norm (Percy, p. 368) and had states press for a legal regulation of the issue when the Additional Protocols to the Geneva Conventions were negotiated (1974-1977). While no state opposed the condemnation of mercenaries as such (here, para. 1791), the precise definition was a major concern from the beginning.

The Array of Definitions of Mercenaries

Art. 47(2) API offers a definition of mercenaries that is notoriously narrow. Its six elements exclude almost every public example of modern-day mercenaries (e.g. typical employees of the Wagner Group and former Blackwater). The mercenary must not only be specially recruited to fight in an international armed conflict (lit. a), but also participate in these hostilities (lit. b). (S)he must be motivated by financial gain and be promised payment that substantially exceeds comparable salaries (lit. c). (S)he may not be a national of a party to the conflict or a resident of a territory occupied by a party to the conflict (lit. d) and may not be part of the armed forces of a party to the conflict (lit. e). Finally, a person may not be sent by any state on official military duty (lit. f). The 1977 Convention for the Elimination of Mercenarism in Africa adopted by the Organization for African Unity (OAU) and the 1989 International Convention against the Recruitment, Use, Financing and Training of Mercenaries offer slightly altered definitions. While the OAU Convention only omits the requirement of the pay to be “substantially in excess” of a comparable soldier’s pay, the 1989 Convention discards the necessity of direct participation in hostilities. The significant difference between the mercenary-specific conventions and API is that both the OAU and the 1989 Convention define a crime of mercenarism, whereas API’s object and purpose is the regulation of and protection during international armed conflicts.

In popular parlance, mercenaries are understood as a broader category. The notion “express[es] the speaker’s disapproval, rather than to describe an individual satisfying the specific criteria under international law” (Clapham, pp. 299-300). At the core of both the legal and public understanding lies the disintegration of mercenaries from the official army of a state (lit. e and f; here and McFate, p. 7). Equally essential is the motivation by financial gain (lit. c; here and here), although the establishment of private armed groups along ideological blocks may somewhat dilute this criterion. Considering that PMSCs have been termed mercenaries irrespective of their involvement in combat, in how far public opinion requires direct participation in hostilities (lit. b) is inconclusive. In any case, both the criterion of recruitment for a conflict rather than a longer standing engagement (lit. a) and the question of nationality or residency (lit. d) are entirely irrelevant to the term of mercenary in the public understanding.

Legal Consequences of Being a Mercenary

According to Art. 47(1) API, “[a] mercenary shall not have the right to be a combatant or a [POW].” Where public opinion and the law are congruent is the fact that, since they are not combatants, mercenaries have no right to engage in hostilities, cf. Art. 43(2) API. Not being afforded POW status deprives mercenaries of certain protections upon capture (e.g. against prosecution for engaging in hostilities) and the right to be released after the conflict has ended.

It seems to be a common misconception, however, that international humanitarian law (IHL) leaves mercenaries without protection. In fact, everyone who is not a combatant, is a civilian, Art. 50(1) API, who enjoys protection “unless and for such time as they take a direct part in hostilities,” Art. 51(3) API. Mercenaries enjoy the fundamental guarantees of Art. 75 API (Fallah, p. 607, Kwakwa, p. 90) and may not be punished without a fair trial (Art. 45(3) API).

Another instance where international law and public opinion diverge is the prohibition and criminalization of mercenarism. Since states are very much reliant on the services of employees of PMSCs (cf. Fabre, pp. 539, 556), few states are members of the OAU Convention or the 1989 Convention and few criminalize mercenarism (here, para. 38). IHL similarly does not expressly prohibit mercenarism and the use of mercenaries by states and, although it served as a basis for the Rome Statute, the crime of mercenarism in the 1991 ILC Draft Code of Crimes against the Peace and Security of Mankind (here, draft Art. 23) was ultimately not included in the Rome Statute. What is more, in criminal trials of persons referred to as mercenaries by the media – or even those fulfilling all criteria – “the fact that they were mercenaries was never taken into account, even as an aggravating circumstance” (here, para. 43(a); here).

The Ratio and Relevance of Art. 47 API

Does Art. 47(2) API serve any purpose, when, as Lawless put it, “its technicality may risk unworkability; its narrowness, irrelevance?”

IHL’s raison d’être is to provide protection in times of armed conflict to the widest possible range of individuals and to regulate the conduct of warfare. The participation of non-state forces in active combat (civilians taking up arms for ideological reasons and those joining for monetary gain alike) compromises these goals. Firstly, adequate training and education on the laws of armed conflicts cannot be ensured. This can lead to increased suffering of the civilian population and, as civilians engaging in hostilities are also bound by IHL, an increase in violations of IHL. Secondly, such participation increases the complexity of a conflict and entails considerable obstacles for the enforcement of the principle of distinction, one of the cardinal principles of IHL. Thirdly, a lack of attribution leads to a lack of accountability and enforcement of IHL both on an individual and state level.

Thus, there is good reason to discourage active combat by non-state actors, even if it is only through a declaratory norm. “[I]n singling out mercenaries as a specific category of actor in armed conflict, Protocol I and the mercenary specific conventions deliver a firm message that mercenarism (or perhaps, more broadly, corporate combat) is at least discouraged under international law” (Percy, pp. 380-381).

But Art. 47 API does go beyond mere discouragement. Without this norm, fighters used by a state but not incorporated into the regular armed forces could potentially assume POW status and all the corresponding rights under Art. 4 A(2) GC III. Art. 47 API thus also allows states to prosecute mercenaries for their participation in a conflict that could otherwise fall under Art. 4 A(2) GC III.

The definition of mercenaries is such a shortcoming and public use of the term highlights this. Rather than fitting public understanding to Art. 47 API (as suggested by Rona), the norm should be fit to public opinion. It is in the interest of IHL to prevent combat by unofficial fighters and Art. 47 API plays a role in achieving this goal. A renewed definition without the elements of Art. 47(2) lit. a and d API (recruitment for a conflict and nationality or residency of a party to the conflict) as well as an amendment to lit. c, striking the necessity of payment that substantially exceeds comparable salaries, would considerably increase congruency between legal definition and public opinion and add to the goals of IHL. 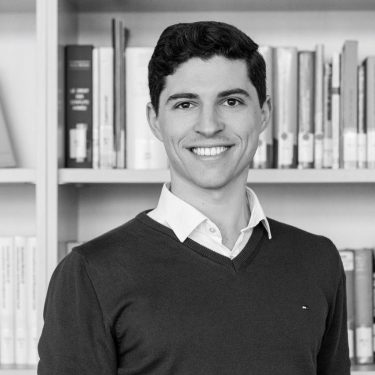