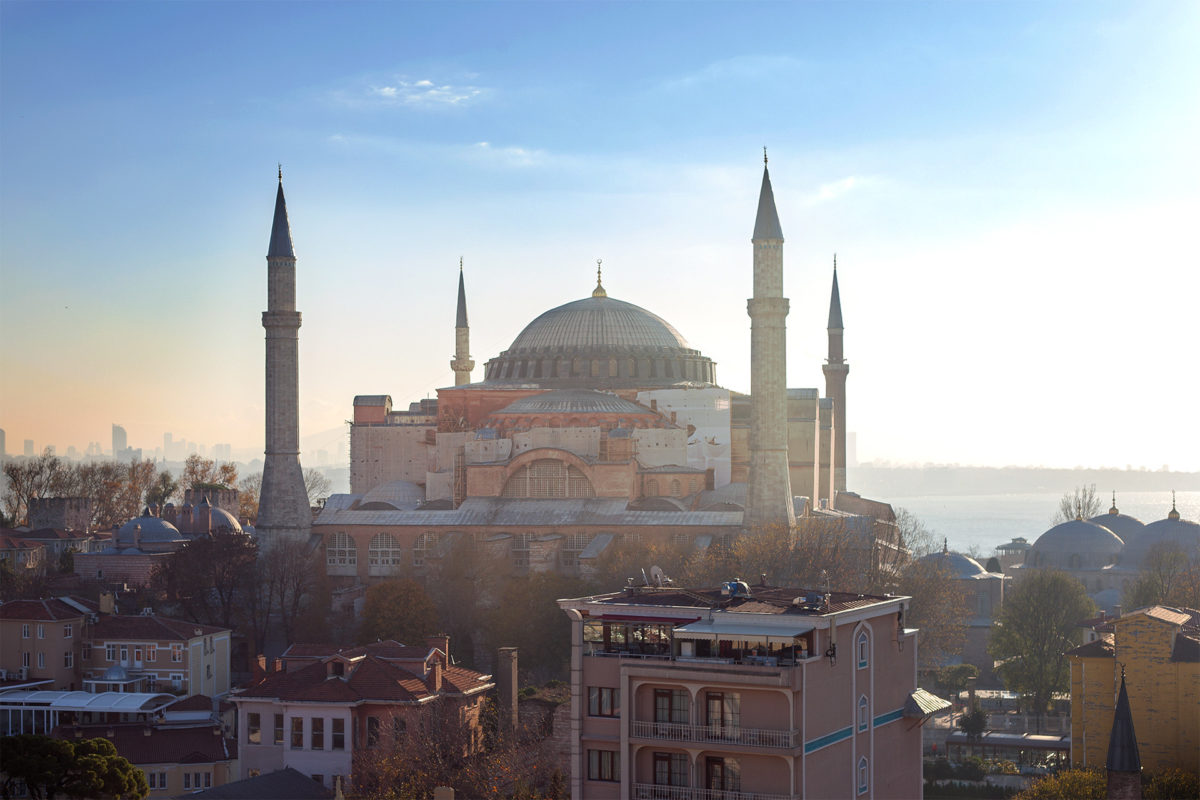 Hagia Sophia at sunrise; photo by Matthew and Heather via Flickr (CC BY-NC-ND 2.0)

Creeping diversion from secularism in Turkey

How the Hagia Sophia decision poses a threat to inter-faith co-existence, secular spaces and freedom of religion

On 10 July 2020, the Turkish government published its decision to re-transform the Hagia Sophia into a mosque in accordance with the decision of the highest administrative court. Since then, discussions concerning the implications of this decision continue. Besides the lack of legal consequences under international law, I argue that the Hagia Sophia decision reveals a bigger issue in the contemporary legal and political landscape of Turkey. Whereas secularization of the Republic of Turkey made it possible for the Hagia Sophia to be accessed on an equal footing by people of all faiths and for non-religious persons, the current regression concerning the implementation of secularism in Turkey is concerning and may indirectly violate Turkey’s international obligations. Lando Kirchmair on this blog already highlighted the relevance of international law in particular within the UNESCO mechanisms, but I would like to comment on two different aspects of the issue which are of international legal significance.

Turkey’s international obligations under the ICESCR

While the 1972 UNESCO World Heritage Convention provides the main framework for the protection of cultural heritage, human rights law sheds light on the issue from a different angle. Article 15(a) of the ICESCR provides for the right of everyone to take part in cultural life. The ICESCR’s Committee on Economic, Social and Cultural Rights (CESCR) observed in paragraph 15(b) of General Comment No. 21 that everyone has the right to benefit from cultural heritages, the Committee emphasized that

‘In many instances, the obligations to respect and to protect freedoms, cultural heritage and diversity are interconnected.’ (para. 50)

Furthermore, the Committee added that the ICESCR’s article 15 obliges State Parties to respect and protect cultural heritage ‘in order to encourage creativity in all its diversity and to inspire a genuine dialogue between cultures’ (para. 50 (a)). Thus, the duty to protect cultural heritage entails the duty of preservation. Whether Turkey has violated article 15(a) of the ICESCR is, however, is doubtful. The changing of the status of the Hagia Sophia by converting it back to a mosque does not itself appear to violate Turkey’s duties concerning the protection or preservation of the Hagia Sophia’s cultural heritage. Especially, because governmental officials of Turkey stated that the Hagia Sophia Mosque will still be open for everyone and its historical mosaics with other historical components will be preserved. In any event, just as Kirchmair observed in connection with the UNESCO mechanisms, the ICESCR, too, lacks effective enforcement mechanisms.

A threat to inter-faith co-existence and secular spaces?

Besides concerns regarding Turkey’s duties to protect its cultural heritage, according to Karima Bennoune and Ahmed Shaheed, respectively the UN’s Special Rapporteur in the field of cultural rights and the Special Rapporteur on freedom of religion or belief, the Turkish government’s re-purposing of the Hagia Sophia is also a concern for the  ‘inter-faith co-existence and secular spaces’ in Turkey. As Bertil Oder suggested, the Hagia Sophia decision is one of the issues that is

‘apt to raise the tension between the progressive segments of the society and the government, while they consolidate the government’s religiously motivated, nationalistic, and socially conservative base.’

The UN’s Special Rapporteurs also noted that the language used in connection with the Hagia Sophia’s transformation and the fact that the head of the Turkish state’s Presidency of Religious Affairs held a sword during the first prayer in the re-converted Hagia Sophia appeals to notions of conquest and may reflect the government’s supremacist view of history and culture. I believe that this concern deserves particular attention due to the fact that the Turkish government is determinedto invoke traditional Ottoman historical views of cultural and religious supremacy vis-à-vis the Christian minority. Indeed, Rıza Türmen, former ECtHR judge and diplomat, and the legal scholar Işıl Kurnaz recently claimed that the decision to turn the Hagia Sophia into a museum in 1934 was a reflection of the attention given and the importance attached to secularism and diversity by the new republic. They added that, against that background, the government’s recent decision appears to be informed by exactly the opposite of these considerations. Their argument is supported by the fact that on 30 July Turkey’s presidential spokesman tweeted on his official Twitter account:

“We have been told the stories of others under the name of modernization for 150 years. It is time to write our own story.”

This brings us to domestic and international legal aspects of the secularism principle. The Turkish constitution recognizes the principle of secularism in its preamble and provides that sacred religious feelings shall not be involved in state affairs and politics. Furthermore, article 136 of the Constitution, which regulates principal limits of the authority of the Presidency of Religious Affairs, prescribes that the Presidency

‘shall exercise its duties […] in accordance with the principles of secularism, removed from all political views and ideas, and aiming at national solidarity and integrity”.

Thus, to invoke notions and symbols of conquest like the sword during prayers is difficult to square with that article and does not serve national solidarity and integrity of different religious communities. Indeed, I argue that this recent practice of the Turkish government goes against the letter and spirit of article 136 and the principle of secularism as enshrined in the Turkish Constitution.

Does the ECHR protect secularism?

When the principle of secularism is not implemented at the domestic level, international law does not oblige Turkey to be secular in order to protect cultural diversity. In fact, Ahmed Shaheed emphasized in 2018 that the international human rights law does not oblige States to accord a particular relationship between the State and religion (para. 75). Due to the fact that its case law is relatively more diverse and complex with regard to the principle of secularism, I will assess the interpretation of the principle under the European Convention on Human Rights (ECHR).

In the past, the European Court of Human Rights (ECtHR) interpretation of the ECHR regarding the secularism principle and underlying values of the Convention has been inconsistent. In Leyla Şahin v. Turkey, for example, the ECtHR recognized secularism as a principle consistent with the underlying values of the ECHR, and more importantly, as a key value of a democratic society (para. 114). Moreover, in a recently published research paper by the Court ECtHR, concerning the application of Islamic law in the domestic legal order, the ECtHR observed, based on its case law, that a legal system based on Shari’a law is not compatible with the fundamental values of the ECHR. However, in Lautsi and others v. Italy the ECtHR considered secularism to be one of the philosophical convictions that inform the ECHR, but not as a key value of the Convention (para. 58). Indeed, with reference to the presence of crucifixes in schools, the ECtHR explicitly stated that it is not the ECtHR’s mission to examine to which extent states comply with the principle of secularism as enshrined in domestic law (para. 57). Yet, judge Giovanni Bonello, was very clear on one point that “In Europe, secularism is optional, freedom of religion is not.” (para. 2.5). The ECHR does not empower the ECtHR to coerce countries into religious neutrality (para. 2.3). Yet,  the ECHR promotes secularism as a means to protect and guarantee freedom of religion  but does not consider it to be the only way freedom of religion can be guaranteed.

At first sight, it may seem as if the ECtHR interprets the ECHR in a way that is politically neutral between different ideologies with regard to a state’s relationship with religions. Undoubtedly, the ECtHR’s interpretation of the secular principle allows for different kinds of relationships between governments and religious institutions (like churches or Islamic sects) within the Contracting States. However, as Susan Marks suggested before, the claim that human rights and their adjudication is somehow neutral and ‘beyond politics’ is in itself a political claim. International human rights law’s ambivalent relationship with the secularism principle is therefore also a political one and it opens a door for governments to invoke alleged religious ideologies and values when arguing in favour of or against domestic reforms. The Hagia Sophia decision is a case in point because Turkey’s regression concerning the implementation of the secularism principle can be considered the ‘root cause’ of the recent decision and of the possible violations of cultural rights.

After Lando Kirchmair’s showed that the legal sanctions within the UNESCO mechanisms that attach to the Turkish government’s recent decision to convert the Hagia Sophia back to a mosque are ‘toothless’, this post suggests that the legal ground for sanctions under ICESCR is weak, too. However, the ECHR may be interpreted in a way to hold its member states to a higher standard. With the ECtHR’s recognition of the historical importance of the principle of secularism in Leyla Şahin v. Turkey, I argue that the secularism principle in the Turkish constitution is still the main safeguard for the peaceful existence for people of all faiths and non-religious persons on an equal footing under the ECHR. And I believe that the defence of secularism is crucial whenever it is called into question – as it was by Turkey’s recent Hagia Sophia decision – since it is the precondition for protecting cultural diversity, gender equality, and equality before the law.

Arınç Onat Kılıç is a graduate from Istanbul University and currently attending the International Human Rights Law master program at Lund University with a master’s scholarship from the Swedish Institute.

Cite as: Arınç Onat Kılıç, “Creeping diversion from secularism in Turkey – How the Hagia Sophia decision poses a threat to inter-faith co-existence, secular spaces and freedom of religion”, Völkerrechtsblog, 24 August 2020.