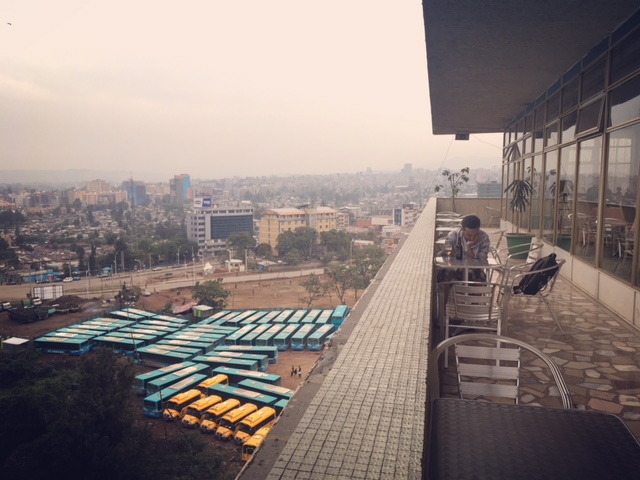 Between narratives and borders

A significant number of Ethiopians are migrating to the Gulf countries to work in the domestic labor market. In late 2013, the Ethiopian government passed a temporary ban on labor migration, which was subsequently lifted five years later in January 2018.

How have these legal developments shaped the current situation, and what are the major push factors influencing Ethiopian labor migration? Two factors are particularly noteworthy: first, a state monopoly which has traditionally been governed by a small group of companies and individuals contributing to a weak private sector. And secondly, the role of the environment in Ethiopia. The latter is especially underplayed when considering migration habits of human and animal life, where resource scarcity in certain regions recurs due to severe droughts and water shortages, leading to population displacement and migration.

The surge in irregular migration from Ethiopia is generally made up of men and women from rural areas with little or hardly any education or skill sets training. The involvement of illegitimate channels in the migratory process, brokers who serve as primary recruiters in rural areas, potentially leading to migrants being exposed to forced labor, smuggling and human trafficking. Abuse and mistreatment of workers are not isolated incidents but have been a chronic problem faced by the major labor sending countries, e.g. Bangladesh, Ethiopia, India and the Philippines amongst others.

Of the world’s 244 million international migrants, over 150 million are migrant workers – out of which 66.6 million are comprised of women. Within the African continent, the Sub-Saharan African countries account for most of the international migration with 7.9 million migrant workers and over half a million migrant domestic workers (MDW). Although there is a significant number of female MDWs altogether, the number of male migrant workers is still higher. As more people continue to migrate from their home countries in search of jobs, it becomes clear that legal parameters are necessary to protect their fundamental rights (“ILO”). Domestic labor migrants who form a significant percentage of the workforce are the most vulnerable from this group.

In October 2013, the Ethiopian Government temporarily banned the migration of domestic workers to countries in the Middle East with whom they didn’t share bilateral agreements. This was mostly due to an influx of trafficked victims being returning to Ethiopia from Saudi Arabia in 2013. In response, the government began to revise the relevant employment proclamation to ensure improved oversight of employment agencies which were part of a widespread transnational network of trafficking. However, during the ban, migration did not stop, migrants turned to brokers at the source and destination countries to facilitate illegal recruitment and labor migration. Although the temporary ban looked good on paper, migration had simply gone underground as prospective migrants continued to pay money to middlemen and brokers to facilitate their journey out of Ethiopia.

In January 2018, the Ethiopian government lifted the 2013 temporary ban, allowing domestic workers to work overseas after passing new laws to guard against ill treatment. The new Ethiopian Overseas Employment Law (Proclamation No. 923/2016) went into effect in January 2018. This Proclamation is specifically set to improve labor migration management and protection mechanisms for migrant workers. In addition to revising mechanisms and administration, the new Proclamation identifies three types of recruitment for overseas employment: public employment organs, agencies, direct employment, and also provides significant modifications to better manage the labor migration process and ensure the protection of Ethiopian migrants working overseas. Accordingly, no deployment of overseas workers is allowed without a bilateral agreement with the recipient country. Most importantly, the deployment of workers (i) under the age of 18, (ii) without an 8th grade of education, and (iii) without a certificate of occupational competence is strictly prohibited. In addition, the Proclamation closely examines the receiving countries’ (Gulf Corporation Countries’) “policy environments in order to advocate for bilateral agreements from destination countries.” The framework of the new laws should with effect lead to cooperation between host countries and home country so that the benefits of migration can be shared by all parties in a responsible manner.

At a conference on safe migration held in Nairobi, Kenya, represented by NGO’s from East Africa working in the humanitarian field, it was ascertained that common challenges faced by the Ethiopian consortium of NGO’s with the New Proclamation were in the implementation strategy and/or lack of it. Systemic errors include not using appropriate methods to communicate with local communities where the approach has been non-comprehensive and limited. In many instances service delivery has difficulty in connecting with local structures. Another major challenge faced by the Ethiopian consortium of NGO’s was the Ethiopian government’s weak border management and overall the lack of a comprehensive migration policy.

Migration is a complex phenomenon. In Ethiopia several push and pull factors exist which encourage migration, particularly when opportunities for men and women are different. There is a huge gender gap in the rural areas (where a growing percentage of the domestic migrants stem from), usually consisting of populations from the countryside, where there’s insubstantial development and deficiencies in technology transference. From this percentage of migrants seeking domestic work in the Gulf countries – the majority are female. The demand in the Gulf countries creates the supply from other countries particularly from Ethiopia and the rest of the Horn of Africa. Earnings of $250-$400 plus per month make a huge difference when you compare these amounts to the earnings of a General Practitioner in Addis Ababa, who makes a little over $200. Social factors also act as incentives to migrate, especially for young men and women. Social mobility, marriages and status can be determined by going abroad and sending back money in the form of remittances to family members. Family members can buy a car, furnishings, food or other extra items for household consumption. When the migrant comes back home he/she usually also aquires better chances for marriage.

What are the two underlying issues which encourage labor migration from Ethiopia to the Gulf countries?

Traditionally there’s been a small group of people and organizations controlling the Ethiopian economy. The economy is a mirror image of the political system and in the case of Ethiopia – who is investing in the country and who are the major players? What has been the role of the government in determining social mobility and development?

The Ethiopian economy is controlled by four major entities:

In 2017, Southern and Eastern Ethiopia continued to battle the impact of drought, exacerbated by disease outbreaks, large scale loss of livelihood assets and human migration. Water scarcity continues to be a driver of displacement and enables the continued spread of diseases. Many pastoralist conflicts around the borders of Ethiopia are mostly non political but related to resources: water, pastures and grazing land for animals. Many of the routes taken by the migrants intersect pastoralist areas. Pastoralists are found in the lowland countries and border areas: in Afar, Somali regions, Borena-Oromia, Gambela etc. Local ethnic groups involved in traditional farming and agriculture practices are also the ones on the move. Poor rains continue to affect households and food security in areas of Oromia and Southern Nations, Nationalities, and Peoples’ Region, one of the nine ethnically based regional states of Ethiopia. As stated earlier, these areas are some of the most underdeveloped regions of Ethiopia and during recurring periods of drought produce a large percentage of economic migrants. Severe drought persists not only in Ethiopia but also in Sudan and Eritrea, forcing communities to move from these areas and often times undertake dangerous journeys through Yemen, Libya and Kenya in search of work.

Ethiopia’s migration wave is characterized by several push factors as migrants prominently consist of populations from the countryside. As internal migration continues towards the cities, 30% of the urban population is located in Addis Ababa with people moving towards the capital and other urban areas in search of employment opportunities. As there is job scarcity in the cities for formal work, this leads some to seek the option of traveling outside the country to work in the domestic labor sector. The demand in the Gulf countries creates a steady supply of human labor, which when unregulated leads to human trafficking, forced labor and other situations ripe for humanitarian concerns.

Note: With the election of the new PM Abiy Ahmed since early 2018, several issues have been addressed. Restoring diplomatic relations with Eritrea has been a successful strategy for the new government, as has been increasing and or opening commercial initiatives with neighbors, allies and the international community. In spite of the new and welcomed changes, several problems persist in the country: unemployment, marginalization of certain ethnic groups due to poor government policies, and a weak infrastructure which complicates access to health services, especially in rural areas.

Priya Singh Nelson is an MA Candidate in International Affairs at The New School University, New York. This report covers results from an independent project supported by academic research and scholarship, conducted through three fact finding missions, to Ethiopia, Kenya and Sudan from May-August 2018. The study was supervised by the International Field Program of the New School University in New York City and Good Samaritan, an organization dedicated to providing psychosocial care and support to trafficked victims, located in Addis Ababa, Ethiopia.