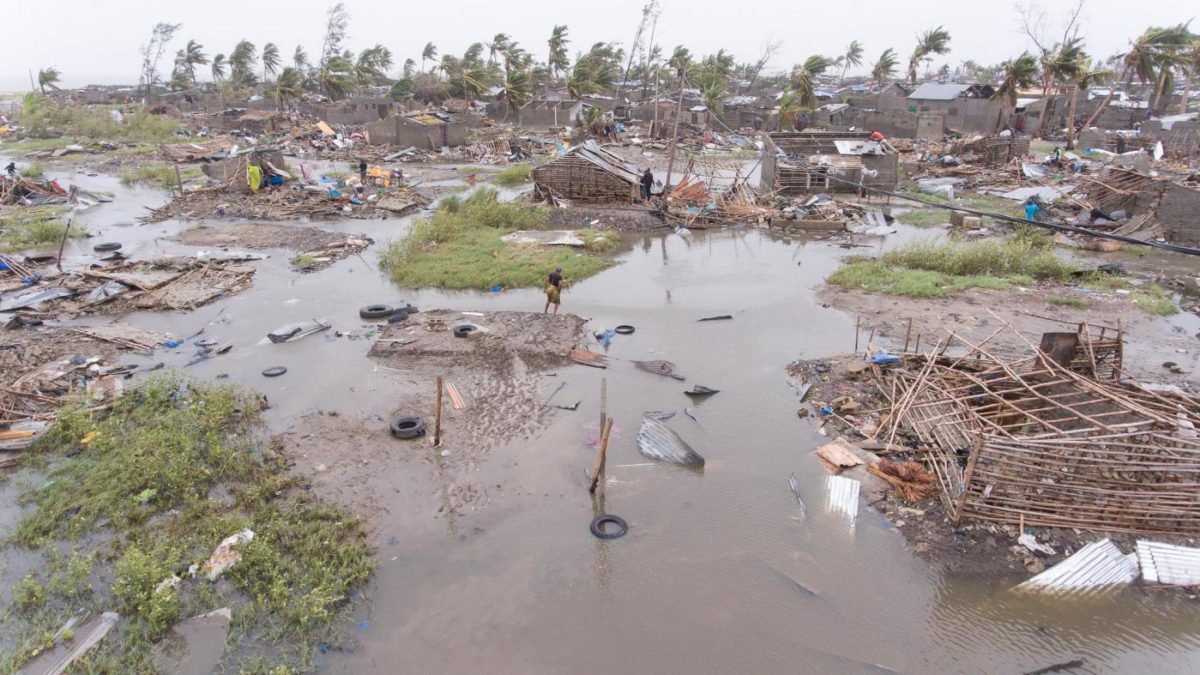 A chain as strong as its weakest link

Climate science and legal causation after the Mozambique floods

In spring 2019, Mozambique was hit by a large-scale disaster. Cyclones Idai and Kenneth tore through the country on 14 March and 25 April, resulting in heavy rainfall and causing major flooding in five of the country’s eleven provinces. The disaster had devastating impacts on affected communities’ enjoyment of their human rights. UNICEF’s Humanitarian Situation Report, published on 31 July 2019, estimates that 1.7 million people in Mozambique continue to face food insecurity, and many individuals still face restricted access to other basic goods, such as water and education.

Yet, almost five months later, only about one third of UNICEF’s funding requirement for urgent assistance needs has been met. Although media attention has turned away, the situation still gives rise to questions concerning the blatant lack of international solidarity in the face of crisis. Political efforts to alleviate the unequal burden placed on States in reducing loss and damage associated with climate change under the UNFCCC process have failed to produce tangible results. The exclusion of liability and compensation from the Warsaw International Mechanism for Loss and Damage associated with Climate Change Impacts illustrates the shortcomings of politically negotiated solutions regarding financial support.

In light of this, the (increasingly urgent) question facing the international legal community is whether non-affected States can be held responsible for harms that occur as a consequence of climate-related disasters.

An upsurge in climate change litigation over the past few years (and the successful outcome of some notable cases) has shown that governments can, in fact, be judicially compelled to reduce their emissions in line with international legal obligations. Attempts to hold private actors accountable for their contributions to anthropogenic climate change are currently pending before the Commission on Human Rights of the Philippines and a regional court in Germany. In inter-state litigation, possible avenues to establish responsibility for climate change-related harms have been identified in academic literature.

The most significant obstacle to successful inter-state litigation following natural disasters arises from the necessity to prove a causal link between the harm suffered and the acts or omissions of a particular actor. Breaking down the process into two steps can be helpful in untangling this notoriously intricate relationship. The first step concerns the appropriate legal test to be applied in cases where the conduct of various actors interacts to cause a single harm. Step two considers the ability of legal standards of proof to accommodate probabilistic scientific evidence in determining whether the test identified in step one has been satisfied.

Disasters such as the one we have witnessed in Mozambique are a result of multiple interacting factors. As the effects of extreme weather events are amplified by social and economic circumstances, for example, the domestic State’s role in reducing vulnerability is crucial in preventing the occurrence of large-scale disasters.

Where it can be established that anthropogenic climate change was a factor leading to the occurrence of the event, the multi-causal nature of climate change itself gives rise to difficulties in singling out any specific culprit State. Also known as the ‘drop in the ocean’ phenomenon, this problem asks whether the contribution of a particular State’s greenhouse gas emissions is sufficient to establish a causal link between the State’s conduct and the harm sustained by the affected State.

Whether these obstacles pose a bar to the successful inter-state litigation turns on the selection of the appropriate test to be applied. The law of State responsibility provides little guidance concerning the appropriate standard to determine causation, but two dominant options are worth discussing; the sine qua non (or “but-for” test; as applied in Bosnian Genocide) and the necessary element of a sufficient set (NESS) test (as applied in CME Czech Republic BV). Pursuant to the but-for test, the conduct of the defending State is only considered to be the cause of the harmful outcome if the harmful outcome would not have occurred without that (in)action, and no other necessary causal factor exists that would “break the chain” of causation. The NESS test, on the other hand, requires only that the conduct in question be a necessary contributing cause, rather than the cause of the harm that occurred.

Applying the but-for test to establish the responsibility of a single State will inevitably lead to an impasse: the (in)actions of no single State and the action of anthropogenic emissions are not capable of causing extreme weather events without the contribution of other States and of complex, interacting global systems, and likely will never be so. Conversely, the failure of (at least) the largest emitting countries to regulate emissions can be considered to be a necessary element for the development of a human-induced rise in global temperatures.

Using the NESS test to establish causation therefore opens the door to a potential finding of State responsibility where multiple actors have contributed to the harm in question. However, in applying the NESS test, the court will still need to be convinced that the relationship between anthropogenic climate change and the extreme weather event concerned is proven, to the legal standard required.

Factually, it is possible probabilistically to attribute certain natural events to anthropogenic climate change with a high degree of certainty, but it remains impossible to say in absolute terms that a specific weather event occurred because of anthropogenic influence on the climate. In scientific attribution inquiries, the purpose has been to assess how human-induced climate change has altered the probability that a specific extreme event would materialise.

The ability to determine the likelihood of an extreme event occurring in a specific location depends on three factors; the quality of observational models (i.e., historical records), the ability of models to simulate the event in question, and human ability to understand the physical mechanisms behind changes in extremes and how they are impacted by climate change. Consequently, some events can be linked to anthropogenic climate change with a greater degree of certainty than others.

Only few tropical cyclones make landfall each year, and observations of this type of event before satellite imagery leave much to be desired. Attributing a specific tropical cyclone, such as Kenneth or Idai, to climate change is therefore a difficult task. Generally, it is predicted that storms will become stronger as the earth continues to warm and an increase in Category 4 and 5 storms can already be observed in most regions.

While the categorisation of a cyclone is based on wind speed, its destructive effect is amplified by heavy rainfall. As tropical cyclone rainfall is governed by the same basic physics as any extreme rainfall, and as rainfall can be attributed to climate change with a higher degree of confidence, connections between anthropogenic climate change and harms suffered during a tropical cyclone can theoretically be established. Moreover, sea-level rise unquestionably exacerbates flooding in coastal States, such as Mozambique.

If the question is whether the risk that any given extreme weather event would occur was solely based on anthropogenic climate change, the answer will always be no, because the risk was never zero to begin with. Is the doubling, tripling, quadrupling of the risk of a certain extreme event sufficient to satisfy the legal standard of proof?

At present, it is impossible to answer this question. International Courts have not elaborated a default standard of proof, using a variety of standards indiscriminately. Although the ICJ (for example) seems to have found a favourite in the ‘convincing evidence standard’, other possible standards range from the lenient ‘balance of probabilities’ and ‘balance of evidence’ to the stringent ‘fully conclusive’.

When the time comes and attribution evidence is presented before a court, judges will need to grapple with the translation of scientific probabilistic assessments into legally workable “proofs”.

In light of the rapid advance of science in this field, it can be expected that States may soon seek to establish the responsibility of the largest greenhouse gas emitters for extreme events resulting in disasters. The prospects of success of a potential case will heavily depend on the scientific understanding of the type of event in question and the availability of long-term, high quality data documenting observed weather in the affected location.

While the scientific community has paved the way for inter-state litigation, it is the legal community’s task to connect the dots. At present, the yawning gap between scientific possibilities and public awareness leads to a lack of engagement on this issue from lawyers, and the causation question seems on the whole to engender fatalism rather than forward motion. Yet as the worst effects of climate change are beginning to manifest, it is upon us to ready the international legal framework for the challenges ahead. This includes clarification of the appropriate tests and standards of proof to be applied in front of international courts in view of climate change.

Of course, final outcomes will hinge on the willingness of the Bench to meaningfully engage with the scientific evidence presented. Through our work, academic lawyers should foster a legal environment where commitment to scientific facts is a given, and where the tools exist to adequately translate them into legal forms.

When visiting Mozambique in July, UN Secretary General António Guterres called his presence a ‘matter of the heart’. It is hoped that for wealthy States, solidarity with vulnerable communities in the context of climate change will soon be a ‘matter of obligation’.

Elena Evangelidis is an LL.M. candidate at Leiden University and an intern at the Max Planck Institute for Comparative Public Law and International Law, Heidelberg.