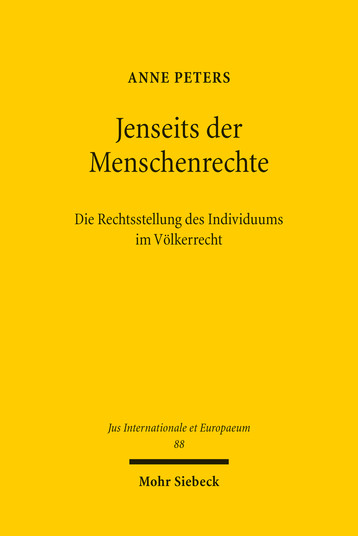 With the first symposium after our relaunch, Völkerrechtsblog emphasizes its role as a forum for transnational legal debate – a debate that transcends jurisdictions and that connects scholars from different academic communities and parts of the world.

Our book symposium concerns a fundamental question: What is the legal position of the individual in international law? Fresh answers come from Anne Peters’ book „Jenseits der Menschenrechte“, initially published in German and soon available in an updated English version from Cambridge University Press. The book title – “Beyond Human Rights” – is the program: Peters aims to show the extent to which individuals have international legal rights (and duties) that are not human rights. She demonstrates the array of such rights in 17 chapters, traversing diverse fields of international law, and claims that the individual has become a primary subject of international law.

For the current symposium, respondents engage with different aspects of Anne Peters’ book. In the first contribution, Zoran Oklopcic looks at the general structure of Peters’ argument, and uses it as a foil to reflect on the form of argumentation in international legal theory in general. Evelyne Lagrange takes a closer look at Anne Peters’ chapter on investors’ rights. Roland Portmann highlights peripheral areas of international law that play a role regarding the status of individuals or other non-state entities in the international legal system. Finally, Anne Peters herself will address some of the points raised and share concluding remarks.

De-constitutionalizing individual rights beyond the state?

Investors’ rights short of human rights in a constitutional perspective

Beyond Human Rights – beyond international law?

Beyond Human Rights: beyond a convertible vattelian?

Zoran Oklopcic
Read more
Share Symposium
facebook twitter
Submit your Contribution
We welcome contributions on all topics relating to international law and international legal thought. Please take our Directions for Authors and/or Guidelines for Reviews into account.You can send us your text, or get in touch with a preliminary inquiry at:
editorial-team@voelkerrechtsblog.org
Subscribe to the Blog
Subscribe to stay informed via e-mail about new posts published on Völkerrechtsblog and enter your e-mail address below.