Ingo Venzke and Kevin Jon Heller’s Contingency in International Law: On the Possibility of Different Legal Histories, an edited volume with thirty distinct contributions just published by Oxford University Press, is an intriguing addition to the historiography of international law. As Ingo Venzke outlines in the introduction, this book highlights past possibilities in international law that failed to come to fruition. In this regard it is very much in line with orthodox historiography: today, few lawyers or historians argue that our current international legal system was historically inevitable and steadily sprouted out of treaties between Greek city-states. The more profound conceptual move of this volume is to connect the search for such narratives of contingency to “the high-flying aim of emancipatory politics” as attempted by the “critical tradition” (p. 11).

For such a project, constructing historical narratives that merely highlight plausible alternatives to the current system of international law is not enough as a scholarly endeavour. Ideally, the alternative visions should also help “guide those on pathways of transformation in their sobering search for change” (p. 5). This volume offers several methodological paths that scholars frustrated with international law can pick up to recalibrate their vision for change. Though this volume extolls its intellectual wares to time-strapped legal practitioners in equal measure, they may feel a little out of place when guided through the introduction with subheadings like “Consciousness-capacity confusion and the neglect of vectorial power” and “Discontinuous systematics and non-events”.

One such path to fuel change, perhaps the most engaging, comes from Mohsen Al Attar: building on Ingo Venzke and Janne Nijman’s spirited endorsements for counterfactual history as a productive tool to appropriate the present (so long as it remains in the realm of ‘plausibility’), Mohsen Al Attar’s highly readable chapter makes two distinct claims: first, the sober observation that writing counter-narratives challenging Eurocentric assumptions, as TWAIL scholars have done over the past decades, ultimately failed to “advance the causes of equality and equity in the reform of international law.” And second, that “TWAIL scholars can leverage counterfactuals to advance a more robust debate on [….] legal reform” (p. 147). When TWAIL scholars write these counterfactual narratives, Al Attar suggests, they may want to consider departing from the restraining ‘plausibility’ criteria altogether. He holds that whenever scholars ground “counterfactuals in context and in reality [plausibility]” they are consciously or unconsciously “embedding them in the European provincialism that informs international law” (p. 159). For this reason, Al Attar contends that only narratives that lie “outside the confines of good sense” can depart from and extinguish “the brutality of the status quo” (p. 160).

Al Attar further encourages scholars to abandon their fear that employing such methods, which pretty much equate to tossing away the weak ethical kit of reasonable scholarly restraint with the reasoning that ‘reasonable’ is itself contingent on Eurocentric assumptions, runs the risk of having one’s work “regard[ed] as nonsense” (p. 161). In so doing, Al Attar comes closest to both the intoxicating Tübinger-Stift idealism that Hegel and Hölderlin birthed, as well as the ‘no-nonsense’ nonsense of British utilitarianism. At some level, both Eurocentric approaches encourage their followers to leave reality behind, with German idealism altogether taking a deep dive into the exhilarating spheres of speculative thought to chalk up an imagined past or progression towards a more just future. Adopting counterfactual ‘nonsense’ as a strategy may not be good enough to break away from Eurocentrism. To avoid this fallacy, some postcolonial scholars like Dipesh Chakrabarty, the author of Provincializing Europe, attempt to free the historical subject through the very theoretical assumptions that caged them – although one may fairly question whether forcing Marx into a heady conversation with Heidegger is really the best way to emphasise ‘agency’, as Chakrabarty suggests.

The most enjoyable and captivating factor in this volume is its open embrace of fiction writings. In this regard, Amanda Alexander’s analysis of Liu Cixin’s Remembrance of Earth’s Past, a series of science fiction books depicting humanity’s quest for survival and its eventual decline and death as but one catastrophe in a string of extinctions, offers the most original insights. Enriching her analysis with fiction, Alexander succeeds in shifting the reader’s view to accept her proposition that once we move beyond Europe, we find a plethora of narrative schemes that allow us to envision “law, humanity, and crimes against humanity quite differently” (p. 367).

Other contributors evoke the novelist Robert Musil as their guide to highlight the power of the liberating potential of narration. Given Musil’s outspoken disdain for politics and any form of ideological commitments, at a time when much of Europe was undergoing mighty political transformations, Musil is an odd choice to prepare lawyers for action. There is an implicit misconception that portrays Musil as a believer in defrosting past possibilities. Looking at Musil’s non-fiction writings would have helped elucidate his Geschichtsphilosophie better. In Das Hilflose Europa oder Reise vom Hundertsten ins Tausendste, for instance, we find Musil’s zealous on the impossibility of counterfactual histories:

Unspooling a factually-tinkered reel forward in time, according to Musil, would run into the same problems of development historicism, that is putting the historian in a position where they can control the piecing together of all the physical and mental forces that constitute the world: upward, downwards, forward, and backwards. It is not just one element that is changed but the entirety of the world. Unless, of course, the writer relies on structural necessity as a scaffolding for their counterfactual narrative or stuffs it with plenty of ‘plausibility’ to make it almost indistinguishable from necessity.

This volume is alive and reflects deeply on much of this criticism. It comes sandwiched in two restraining accounts: first, Fleurs John’s interrogative chapter that questions a direct relationship between ideas and political action, a critique that has plagued much of European political thought for at least a century; and second, Samuel Moyn’s cautioning that counterfactual history requires plenty of guardrails to turn the dissolved possibilities of the past into the future possibilities of the present.

Taken together, this volume offers a string of methodologically rich and analytically sound exploration into the possibilities and limitations of alternative (even counterfactual) legal histories. The individual pieces will also certainly inspire readers to reimagine the contours of the current international legal system. However, this alone may not succeed in ushering in the desired political change. For such an intervention, if it can be brought about through academic writings at all, a tighter integration of the individual chapters may have been more conducive. 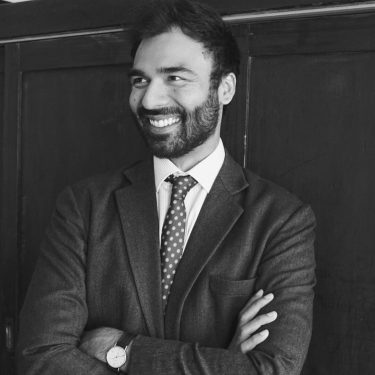 Adeel Hussain is an Assistant Professor of Legal and Political Theory at Leiden University and a Senior Research Affiliate at the Max Planck Institute for Comparative Public Law and International Law in Heidelberg.