Ukraine v. Russia: Passage through Kerch Strait and the Sea of Azov

Part I: The legal status of Kerch Strait and the Sea of Azov

On 16 September 2016, Ukraine instituted arbitral proceedings against Russia under Part XV and Annex VII of the 1982 United Nations Convention on the Law of the Sea (UNCLOS) in the Dispute Concerning Coastal State Rights in the Black Sea, Sea of Azov, and Kerch Strait (Ukraine v. the Russian Federation). The case relates to Russia’s occupation of Crimea in 2014, which fundamentally disrupted the maritime order in the Black Sea and the Sea of Azov. While the exact content of Ukraine’s claims is not publicly known, it is understood (see statements here, here, here, here and here) that they include Russia’s ongoing construction of a bridge across Kerch Strait and restrictions on passage of Ukrainian vessels through Kerch Strait and the Sea of Azov (third States’ vessels are also affected, but would not be part of the Ukrainian claim). Kerch Strait Bridge is intended to create a land connection between Crimea and Krasnodar region which, in light of Ukraine’s blockade of Crimea, is crucial for supplies from Russia.

In three consecutive posts, we will map some legal issues that the arbitral tribunal might face in the context of Ukrainian rights of passage and Russia’s challenge of the arbitral tribunal’s jurisdiction – if these issues indeed form part of Ukraine’s application. Our first post provides some context and addresses the question of the legal status of Kerch Strait and the Sea of Azov. Our second post deals with the issue of potential Ukrainian passage rights, most of which depend on the legal status discussed in the first post. In our third and final post, we examine the impact of these substantive findings on the question of the arbitral tribunal’s jurisdiction ratione materiae over Ukraine’s corresponding claims.

Of course, it is beyond the scope of our contribution to provide an exhaustive analysis of all relevant facts and law and to arrive at any final conclusions. We do, however, intend to point to some of the most intricate legal questions and trigger further debate on an interesting case that –in our view– deserves more attention by commentators. We would also like to point out that we will refrain from discussing the question of whether Crimea remains Ukrainian territory or has been lawfully incorporated into Russia as a matter of public international law. Instead, we will – for the purposes of this analysis – accept the predominant view that the former is the case. 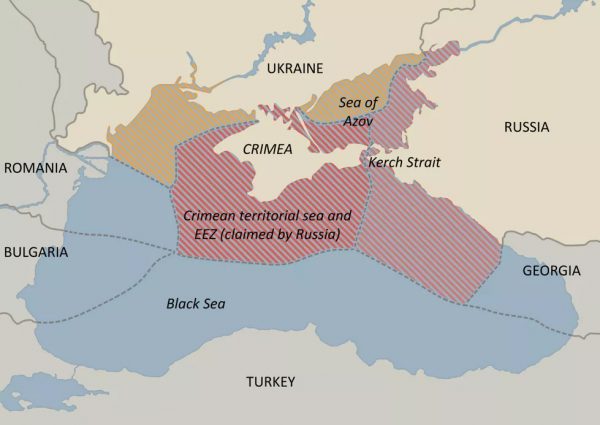 The Sea of Azov is a small, shallow sea connected to the Black Sea. Kerch Strait, which is the only connection between the Azov Sea and the Black Sea, is located between Kerch peninsula in the West and Taman peninsula in the East. While the former peninsula is part of Crimea, the latter is located in Russia’s Krasnodar Krai. Kerch Strait is approximately 45 km in length and, at its narrowest point at the northern end of Chushka landspit, only about 3–5 km wide. Kerch-Yenikalsky canal, which was first built in 1877 and used to be operated by Ukraine, is the only waterway through Kerch Strait that is navigable by large ships. Smaller vessels can use the Russian fairway passages #50 and #52 situated east of the canal.

Reportedly, more than 8.000 mostly (but not exclusively) Russian and Ukrainian ships used to pass through Kerch Strait in an average year prior to 2014. This reportedly secured at least USD 80 million of revenues for the providers of pilotage services in Kerch seaport. After the Russian occupation of Crimea in 2014, the Ukrainian Ministry of Infrastructure adopted an order which closed all Crimean ports, including two ports on the banks of the Kerch Strait (Kerch Fishing Seaport and Crimea port). These measures significantly reduced the number of vessels entering Crimean ports. For example, as part of its non-recognition policy, the EU has banned vessels flying the flag of EU member States “from making any payments to the Port Authority of Kerch and the Port Authority of Sevastopol”. Ukraine also reported to the International Maritime Organization (IMO) that it is no longer able to guarantee safety of navigation in the ports of the peninsula and the adjacent waters. 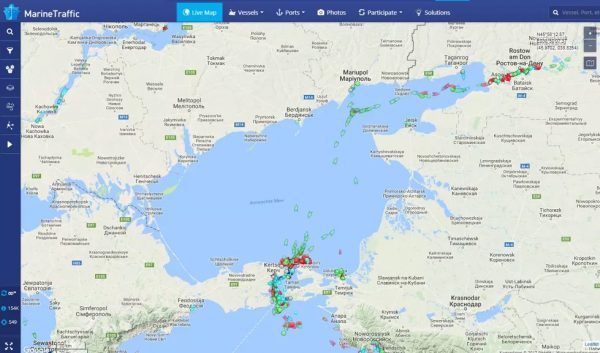 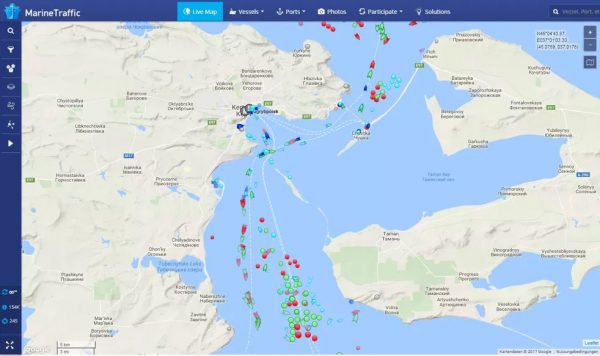 In his treatise “The Law of Territorial Waters and Maritime Jurisdiction” published in 1927, Philip C. Jessup considered that a claim to the Sea of Azov as part of the Union of Soviet Socialist Republics’ (USSR) territorial sea “seems reasonable and […] would not be contested” (at p. 383). Until 1991, the Sea of Azov fulfilled the requirements of a “bay the coasts of which belong to a single State” within the meaning of Article 7 of the 1958 Convention on the Territorial Sea and the Contiguous Zone (CTSCZ) and today’s Article 10 UNCLOS. Accordingly, the USSR drew a bay closing line across Kerch Strait (see here and here), connecting Cape Kyz-Aul and Cape Zhelezny Rog – and declared the Sea of Azov internal waters. Consequently, it was unnecessary for the USSR to also claim the Sea of Azov as a “historic bay” (for which kind of bay no written rules exist, see Article 7(6) CTSCZ and Article 10(6) UNCLOS). As one author has put it: “[S]ome ‘claims’ categorised as being ‘historic’ today – such as the Sea of Azoz [sic!] – were probably misnamed or at least loosely entitled as ‘historic’, because they were – even at the time of the inception of the ‘claim’ – in any case internal waters in the light of then-existent international law or at least constituted ‘ancient rights’” (Clive Symmons, Historic Waters in the Law of the Sea: A Modern Re-Appraisal, 2008, p. 299).

When Ukraine declared its independence on 24 August 1991 (see also 1991 Agreement establishing the Commonwealth of Independent States), its sovereignty extended to most of the Western shore of the Sea of Azov including Crimea, which borders Kerch Strait (Crimea had been ceded to the Ukrainian Soviet Socialist Republic in 1954). A maritime boundary between Russia and Ukraine in the Sea of Azov was not, however, established and the issue remained a point of contention between the two States. Notably, Ukraine unilaterally proclaimed a boundary line in Kerch Strait in 1999 which would have put Tuzla Island on the Ukrainian side of the strait. There are also signs that at least Ukraine may have considered (or was going to consider) parts of the Sea of Azov as its territorial sea rather than as internal waters. For example, a 2002 Draft Law on Inland Water, the Territorial Sea and the adjacent zone of Ukraine defined the territorial sea of Ukraine as including Ukraine’s coastal waters in the Sea of Azov within a breadth of 12 nautical miles (Article 2). However, this draft law was never adopted, because Russia put further pressure on Ukraine by unilaterally initiating the construction of a dam between the Russian coast and Tuzla Island in 2003.

These developments seem to have been met with little opposition, which may also be owed to the Sea of Azov’s little importance for strategic purposes. While Article 10 UNCLOS and Article 7 CTSCZ only cover bays which belong to one State, they also do not necessarily exclude the possibility of a multi-State bay consisting of internal waters if that regime is based on the consent of all relevant coastal States or State practice, even if many commentators take that position. This question remains one of general international law. An often-used example of such a bay is that of Ruvuma Bay, which, according to a 1988 treaty between Tanzania and Mozambique, constitutes internal waters of these two States. In many cases, however, attempts to create such shared border bays have attracted international protests, which, according to some, calls into question the existence of such a customary rule (Clive Symmons, Article 10 UNCLOS, in: Alexander Proelss (ed.), United Nations Convention on the Law of the Sea: A Commentary, 2017, MN. 21, 29). In the case of the Sea of Azov, it has been argued that there was no automatic transformation into territorial seas in 1991 and that Russia and Ukraine now share a “condominium” of internal waters. The idea of such an “inherited” condominium in a multi-State bay is not entirely new. In its 1992 judgment in the Land, Island and Maritime Frontier Dispute (El Salvador/Honduras: Nicaragua intervening), the International Court of Justice (ICJ) held that the Gulf of Fonseca, which was held under the single control of Spain until 1821, afterwards retained its status as a “historic bay” of internal waters and was thus subject to “joint sovereignty” of El Salvador, Honduras and Nicaragua.

In the light of the special circumstances of that case, it is unclear whether a similar argument can be made with respect to the Sea of Azov. It could be argued that Russia and Ukraine, after “inheriting” the bay, expressly or tacitly consented to keep the original regime and later codified this practice in the Cooperation Agreement. However, it can be doubted whether both States consistently upheld their consent in light of the lack of any proper shared governance system and the continuing delimitation dispute in the Sea of Azov. In addition, there seem to be new indications that Ukraine will distance itself from the bay regime (if any) in the light of waning chances of a return of Crimea. On 16 July 2015, a group of Ukrainian members of parliament submitted a Draft Law on the Denunciation of the Treaty between Ukraine and the Russian Federation on Cooperation in the Use of the Azov Sea and the Kerch Strait which was not, however, adopted. This is not surprising as Ukraine apparently relies on the Cooperation Agreement for both its claim that the construction of Kerch Strait Bridge is illegal and for its passage rights through Kerch Strait (see Part II of this contribution). In 2016, a number of Ukrainian State agencies requested satellite photos from Ukraine’s State Space Agency, naming part of Sea of Azov Ukraine’s Exclusive Economic Zone (EEZ). Thus, even if a shared bay regime of internal waters exists in the Sea of Azov, it might not be here to stay. 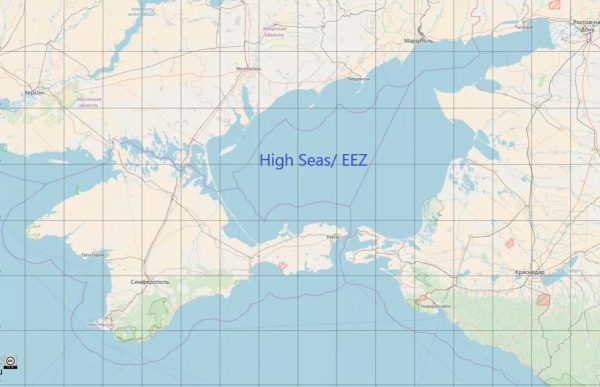 In this post, we have argued that there are two possible Scenarios for the current legal status of Kerch Strait and the Sea of Azov. Under the first Scenario these waters are internal waters of Russia and Ukraine as they form part of a single bay regime that has only later evolved into a border bay. Under the second Scenario, the original bay regime dissolved with Ukraine’s independence or thereafter and Kerch Strait and the Sea of Azov largely are part of the territorial sea of Ukraine and Russia. In addition, a patch of high seas (or potentially EEZs) exists in the central Sea of Azov (see Picture 3). While the second Scenario seems more likely, the following two parts of our contribution will take both Scenarios into account.