This year ought to have its place in the history of moot court competitions – when the pandemic sets us apart, the internet unites us all. ILSA took this chance to guide Jessup towards a more international track: It decided to hold Global Rounds open to all registered teams. As a Jessuper from China,* I could not be more thrilled to know the news that the door that once left only a small opening for Chinese teams to experience a truly international competition was finally pushed wide open.

A Door of Opportunities

How many courses should a Chinese student take to earn an LL.B., the most basic law degree in China? According to the instruction of the Ministry of Education, the number is 15. Among those, only one international law course (Public International Law/国际法) is mandatory. Overwhelmed by domestic law courses, one can hardly make space to focus on something international. This is particularly true for me who took the Public International Law course as a freshman. Impressed by Criminal Law and Civil Law which seemed more useful for daily life, I immediately forgot almost everything about the Lotus case, the North Continental Shelf case, etc. once I finished the final exam. Had it not been for the Jessup journey right after my freshman year, I would sadly have had no chance to explore this fascinating field.

In addition, Jessup offers a platform to connect Chinese students with peers from other jurisdictions. Though small, there is a chance for some Chinese teams to advance to the International Rounds and to compete with law students from all over the world. Though not in Jessup, our team had a taste of what the International Rounds look like in the ICC Moot Court 2018, a valuable experience that widened our perspective. By meeting with teams from other jurisdictions, one can get an idea of how diverse this world is and get a taste of what it would be like to have an international legal career.

Regarding the “better legal career”, this prospect is a more tangible one. Over the years, Jessup has gradually become a steppingstone for boosting a law student’s skills and a leverage to get to a higher place. Take law firms as an example: Since Jessup gathers quite a few extraordinary law students from all over China, it’s quite reasonable for law firms to take this chance to find their “future partner”. Top firms like Clifford Chance and Fangda Partners will extend internship invitations to participators with excellent performances, and those who get this lucky can expect offers to return to those firms within months. Such opportunities are especially important for those students who came from a smaller or lesser known law schools, particularly when one’s home law school is not a target school of top law firms. 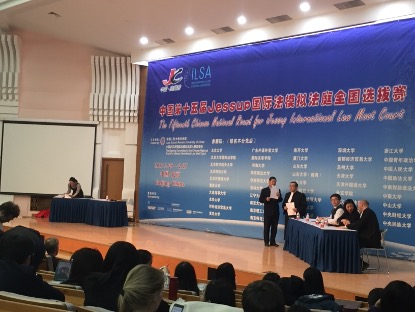 (Jessup 2017 Chinese National Final Round: A photo taken by the author)

The Door Was Pushed Wide Open

That said, the Jessup door only left a small opening for quite a long time. Except for the Global Rounds 2021 that were opened to all registered teams, Jessup is not an international but more like a national competition for most Chinese teams.

Unlike the Vis Moot where every team can head to Vienna/Hong Kong for a gathering of arbitration fans from various jurisdictions, Chinese Jessup teams have fewer chances to get a taste of the “international” part of the “Philip C. Jessup International Law Moot Court Competition.” Back in 2017, when I was a freshman in the Jessup, our team spared no effort to rank 7th out of 49 teams, which was an exciting result for a team that formally had joined Jessup for the first time. Seventh place in China sounded like a success, but what was attached to it was that our Jessup journey ended in Beijing without meeting any teams from other jurisdictions. After all, only the Top 6 teams (about 12%) are able advance to the International Rounds according to Art. 4.4 of Chinese Rules Supplement 2017. In other words, for the 43 remaining Chinese teams (about 88%) ranked from 7th to 49th, Jessup 2017 was not as international as expected except for the subject of the competition – international law.

Against this background, it was more than exciting to experience a Jessup competition that welcomes all teams from around the world. In 2021, 53 teams from China participated in the Jessup Global Rounds, and among them 12 teams were represented in the White & Case Advanced Rounds, i.e., among the top 168 teams internationally. Among those 12 teams was the Peking University School of Transnational Law team, where I served as a coach. During our journey this year, we met teams from Australia, Indonesia, Israel, Pakistan, UK, etc. It was not until then that I finally re-discovered the “international” nature of this prestigious competition. 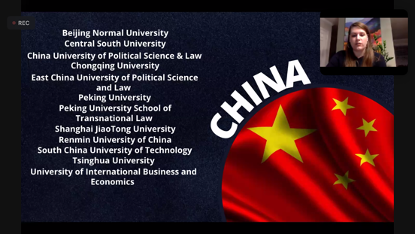 (12 Chinese teams advanced to the Advanced Rounds: A Screenshot)

Will the Door Remain Open?

The Global Rounds this year are over, so let’s turn our eyes to the future – what will be the form of Jessup 2022? Should it include Global Rounds just like this year so that every team on the planet can take part in this great gathering of law students?

As we can see from the ongoing third wave of the pandemic, there is little opportunity for teams to participate in person without burdensome administrative steps. Take Chinese teams as an example. For a Chinese to fly to the United States, one has to quarantine for 14 days; when flying back to China, another 14-day quarantine is required. Besides the one-week competition in Washington (see the International Rounds 2019 as an example), a Jessup journey will take over a month if the general situation has not improved until then. Facing the uncertainty of the pandemic, there is no reasonable excuse for us to abandon the convenience that the internet brings with it.

In addition, bringing Jessup online will further contribute to the internationalization of this great competition. As noted above, only 12% of Chinese teams can meet with teams from other jurisdictions in the traditional competition. Had it not been for the Global Rounds, Jessup in China would have been a more national than international affair. The success of the Global Rounds of this year underlines ILSA’s ability to make Jessup even more international, which speaks for keeping such an international trend for the coming years. As for the qualification rounds that usually serve as gatekeepers, they can be preserved as they did this year, but they should not be a barrier to keep teams experiencing the “international” element embedded in the Jessup.

The pandemic might bring sorrow and pain, but also the chances for change. Jessup is a door for Chinese law students, but that was only door open to a small degree. It was pushed fully open in 2021, so let’s keep it that way in 2022 – not least as a 20th anniversary present to the Chinese teams.

* Unless otherwise specified, the “China” in this article refers to the jurisdiction of Mainland China. 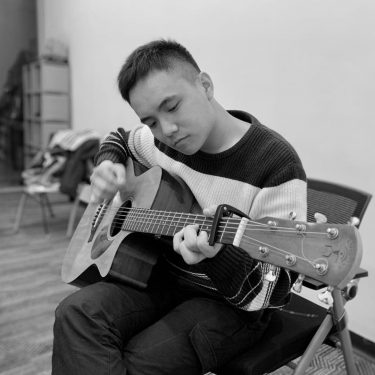 Chen Liang is a J.D./J.M. Candidate at Peking University School of Transnational Law, and he is the Founder & Editor-in-Chief of Legal Competitions, a WeChat Official Account focusing on international law and moot court competitions. See his LinkedIn here.