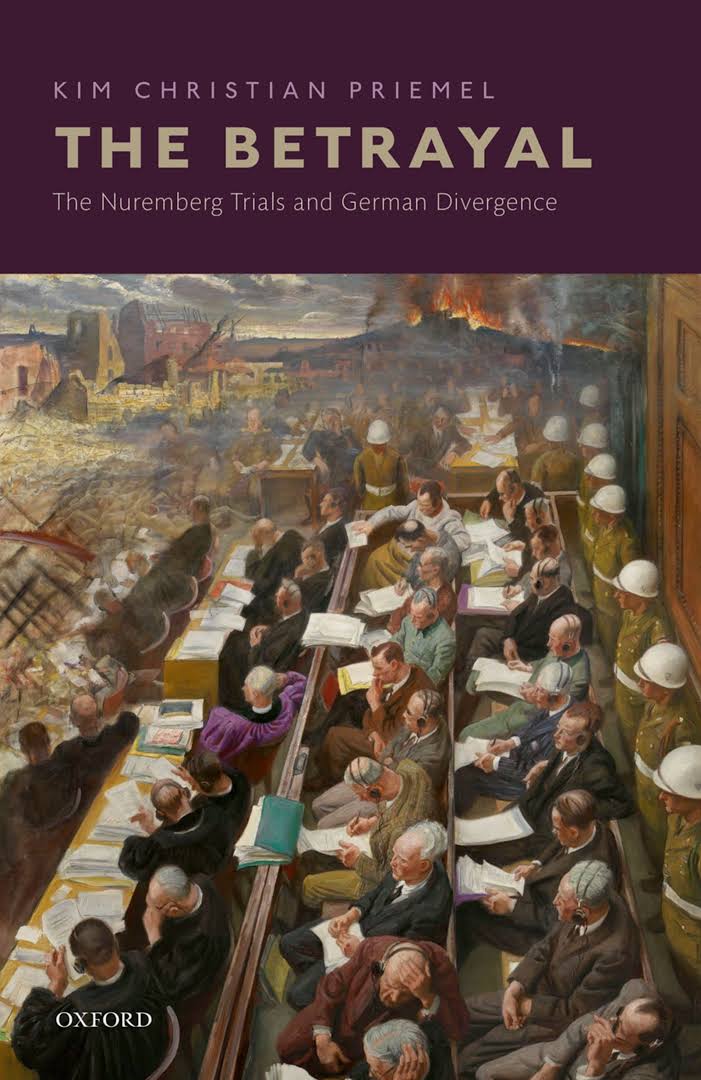 If you are looking for perfect justice look somewhere else.

It is not very often that a historian’s book, even one about a pivotal moment in the annals of international criminal law, meets with such interest among his legal and jurisprudential colleagues, and I am very grateful for the willingness of the three reviewers (Prior/Papa and Mégret) to devote precious time to The Betrayal and to the Voelkerrechtsblog team for hosting the symposium. One of the difficulties of trespassing disciplinary borders is that one needs to cater to different audiences with varying empirical backgrounds and analytical expectations – and easily ends up boring all sides. That said, the observation by Kelly-Luise Prior and Marjana Papa that there are redundant historical facts in the book bodes ill for what my historiographical peers might have to say. Still, if this is the worst criticism to face I shall be content. Indeed, the contributions raise important (and more interesting) issues, some of which should have been addressed in the book while I wish others had been formulated by me as succinctly and as elegantly as the reviewers have managed to on these pages. Rather than agreeing to or contradicting their comments and observations I would like to use the following paragraphs to discuss some of the important suggestions of Kelly-Luise Prior, Marjana Papa, and Frédéric Mégret.

My first point is merely one of clarification. The book’s title evidently invites misunderstandings. Readers may think that the Nuremberg trials were not about betrayal but constituted duplicity. But The Betrayal does not inquire if “the one-sided guilt of the Germans, which was established by virtue of the Nuremberg trials, truly reflect the entirety of conflict and atrocities during World War II” (Prior/Papa). Of course you could ask this question and Richard Minear famously (and inquisitorially) did in his 1971 monograph on Nuremberg’s sibling, the International Military Tribunal for the Far East, in his none-too-subtly titled Victor’s Justice. Yet I don’t think any serious historian (and, for what it’s worth, I hope to belong to this distinguished collective) would question Germany’s primary responsibility for World War II or the exceptionality of crimes committed by Germans between 1939 and 1945. Nor do I think that Nuremberg’s legitimation was greatly tarnished by the fact that Allied war crimes were not prosecuted (and found guilty since acquittals of Allied defendants would hardly have appeased contemporary critics in occupied Germany and elsewhere). This is not to say that it would not have been preferable to investigate, indict, and try unlawful actions by all warring nations. And in all likelihood, the Nuremberg Trials’ place in history would have been close to unassailable had the scales of justice been perfectly balanced. Unfortunately, though, history knows little of perfection. In 1945ff., there was not a shred of a chance to try Allied soldiers and politicians before an international tribunal for whatever crimes they had or had not committed. To expect Nuremberg to live up to standards of international criminal law hardly established today, if at all, is not so much naïve as it is anachronistic – which, to historians, is the more damnable sin.

This is precisely where one of Frédéric Mégret’s many apt formulas comes in handy: The Nuremberg Trials “made a case that needed to be made after this war and those crimes.” They did not, for all the ambition of the likes of Robert Jackson, Telford Taylor, Suzanne Bastid-Basdevant, or Quincy Wright, usher in a new era of international criminal jurisdiction. In this regard, the Realist international scholars who heaped scorn and ridicule on the proceedings as hallmarks of a misguided, nineteenth-century vintage, liberal-legalism were, ironically, off the mark. Their critical stance on claims that Nuremberg amounted to “one of the most significant tributes that Power has ever paid to Reason” (Jackson) took the opening speeches at face value and ignored just how much ‘realist’ appreciation of power politics had gone both into the trial design and the proceedings. Jackson’s fairly explicit reference to racial segregation in the US (“some regrettable circumstances at times in our own country in which minorities are unfairly treated”) and the continuous battle between prosecution, defence, and tribunal over the admissibility of the Ribbentrop-Molotov Pact and its secret protocol, are cases in question.

In this sense, and again ironically, ‘Nuremberg’ and ‘Tokyo’ actually do serve as valuable precedents for today’s international, special, mixed, or other tribunals and courts. As Mégret correctly emphasizes, the two handfuls of post-World War II international and interallied tribunals were a highly contingent phenomenon: there were other options, though none offering anything close to the same degree of political and moral legitimation. And there was no straight road from Nuremberg to The Hague either. Had there been such path dependency, both historians and jurists would have a hard time explaining the 50-year gap in-between. So rather than enshrining the International Military Tribunals (and, to a much lesser extent, the subsequent Nuremberg Military Tribunals) in sepia-toned, “nostalgic memory” (Mégret), they serve as cautionary tales. With all their accomplishments (which are numerous) as well as their shortcomings (which are undeniable, yet hardly on a par with the achievements), the proceedings at Tokyo and Nuremberg illustrate the vicissitudes, challenges, and imperfections of criminal trials under international law. To understand why none of these became the flawless feat of justice which we might want them to have been helps understand what can reasonably be respected from their alleged descendants at Arusha, Freetown, or The Hague – and under which conditions. Much disappointment and frustration might thus be avoided.

With an eye to conditions, it is surprising how little attention many Nuremberg-to-The-Hague narratives pay to the fact of occupation. Any endeavor to reshape societies depends on the ability to muster the required means. Occupation in 1945, after all, did not only mean relatively easy apprehension of potential defendants and virtually unlimited access to evidence of all sorts – in stark contrast to the work of the ad hoc tribunals, not mentioning the ICC – but also the political, military, and economic power to fuel the transition from dictatorship to Western-style democracy. In other words, the idea of using criminal trials to transform an entire society enjoys much greater credibility in the context of total military defeat and unlimited occupation.

Does this mean that the current international tribunals, already on the finishing line, or the ICC, with many obstacles in its way, have abandoned comprehensive storytelling about collectives such as nations and states, as Prior and Papa suggest? Aware of their limitations these institutions are, but so were their predecessors seventy years ago, as the careful, sometimes even reticent judgments but also not a few minority opinions indicate. Also, historiographical ambitions continue to play out in court, usually the more visible the more prominent defendants are. The work of legal anthropologists such as Nigel Eltringham and Richard Wilson also suggests that storytelling remains significant in current international trials, often but not inevitably in self-reflected ways: assumptions, predispositions, premises – in short, the force of hermeneutics strongly influences how lawyers construct their trial narratives. That lawyers do not always choose which historical narratives underlie their own explanatory frameworks, is one point I hope The Betrayal serves to illustrate. That they are unlikely to do without narratives altogether – a point raised by the Law-and-Literature movement since the 1970s – is another. If these findings do not appear entirely incredible to an audience trained in the law there may be a benefit in having yet another book on Nuremberg.

Kim Christian Priemel is an Associate Professor of Contemporary History at the University of Oslo. His research interests include legal history in general and the history of international criminal law in particular.