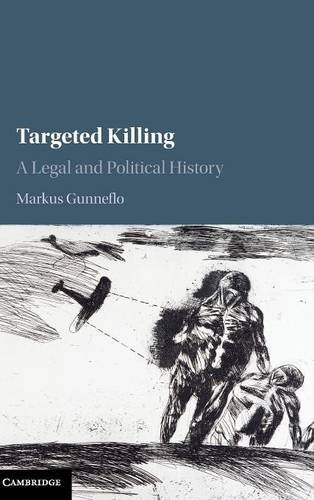 Ioannis Kalpouzos: On the constitution of global asymmetric warfare

It is worth repeating that the suggestion that drone technology constitutes a ‘paradigm change’ and a ‘break with the past’ in the international law of force is of limited heuristic value. Both the descriptive accuracy and normative implications of this position have been challenged. Notably, such stark peridiocization may have pernicious effects, especially in naturalizing the promise of a ‘new way of war’ associated with the distanced precision of drone targeting, even if one is skeptical or hostile towards that promise. The post-Cold War unipolar shift and the post-9/11 designation of the global criminal enemy have, to be sure, provided us with the dominant odd couple of global asymmetrical targeted killing. But Markus Gunneflo shows us, in this tour de force of legal history and philosophy, that the fire has been burning at the very foundations of the post-WWII international legal order. Targeted killing has extended – and will no doubt extend – far beyond its favourite tool.

The virtues of Targeted Killing: A Legal and Political History are too many to address in such a brief note. They range from a sophisticated methodological approach to both international law in history and the history of international law; to the illuminating treatment of central conceptual international legal fault lines such as the relationship between the jus ad bellum and the jus in bello, and that of human rights law and the law of armed conflict; to the crucially original insights into how sovereign political authority is maintained and spread through the increasing legalization of targeted killing.

The book strikes an exemplary balance between disciplined focus and ambitious reach. The discussion, with attention to under-reported detail, of the internal debates on the delineation and elaboration of the authority to kill in Israel and the United States provides for the historical and legal thread that establishes killing as a means of the constitutional protection of citizens while distinguishing it from (unlawful) ‘assassination’. What drives this is the dynamic of the establishment of sovereign authority, and the concomitant protection of citizens against hostile aliens, in territory under contestation – in Israel this is the territory associated with the creation and protection of a state consistently perceived to be under existential threat; in the case of the US the protection of the state, the citizens and the homeland have extra-territorial, indeed global, aspirations. Both instances of protection through targeted killing entail the mobilization of constitutional authority in situations of violence that defy clear categorization as either war or peace, international or non-international armed conflict.

The assessment of drones and new weapons technology as constituting a qualitatively new way of war, has been associated with the re-imagining of war as top-down ‘administration of violence.’ What necessarily follows is the attempt to regulate war governance through the application of norms and rules of (global) administrative law. This can be seen, for example, in the focus on transparency and accountability as central to how law regulates global targeted killing. It can be argued that such re-imagining concedes too much and, while constructively seeking to regulate, takes the ‘new paradigm’ as a given compelling message that the technology has spectacularly transmitted. Apart from an insightful reference to targeted governance (p. 163), Gunneflo resists the talk of ‘administration’. The book concerns itself with how what may be administered is constituted.

This is very much a study about the internationalization of an asymmetrical relationship between a public sovereign authority and an individual target. But the book looks at global targeted killing as international(ized) and potentially global constitutional law, which is, Gunneflo quoting Böckenförde (p. 236), ‘genuinely political law’. The appreciation of global asymmetrical warfare in its constitutional rather than administrative dimensions is crucial and the major, among many, contribution of this book. It enriches the assessment of the normative import of doctrinal debates and the appreciation of the role of (the compulsion of) legality in constituting the legal relationship, which authorizes and enables the killing.

At the centre of this constitution, and in order to extend sovereign authority that kills for constitutional protection, is the legal category of war, the evolution of which my research is attempting to chart. The existence of an armed conflict is a pre-requisite for the activation of the law that enables and authorizes the targeted killing discussed here. The international legal categories of war and armed conflict have, throughout the 18th, 19th and 20th century, struggled to recognise and delineate an intermediate space between on the one hand a full subject of international law, recognised as an equal enemy, and on the other hand an illegitimate outlaw excluded from international legal regulation. As is well known, the introduction of the category of non-international armed conflict, starting with common article 3 of the Geneva Conventions of 1949, attempted the lowering of the threshold of what the law recognises as war, through a flexible balancing of the intensity of the violence and the organization of the armed group. The avowed aim was to extend what was seen as a legal regime of humanitarian protection.

Through international criminal law, and the jurisprudence of the international criminal courts and tribunals, a low threshold of wide applicability, and the concomitant extension of the legal category of armed conflict, has now linked this aspiration of humanitarian protection with a punitive purpose. While this punitive purpose is exercised against individuals for their culpable actions, it is in a variety of ways related to their membership and role in a particular group – a group either explicitly or implicitly labeled criminal.

It is a short step back to the law of armed conflict and the flexibility in identifying terrorist networks as parties to a de-territorialized conflict to be both punished and targeted. ‘The shift from exclusion to inclusion of the terrorist enemy in the law of armed conflict … can … be understood as a continuation of a trajectory of legalization starting in the era of decolonization’. (p. 205) War is spreading together with law and Markus Gunneflo’s book is our most exhilarating guide.

Ioannis Kalpouzos is a Lecturer at City Law School, City, University of London, where he teaches Constitutional Law, International Criminal Law and Law & War. His research ranges from new weapons technologies, to ‘banal’ international criminal law, to the evolution of the concepts of armed conflict.