Ambulance being dispatched to westren area of Freetown, Sierra Leone to attend a suspected case of Ebola. The cleaner disinfects the house of the susptected case with chlorinated water. Photo by UNMEER/Martine Perret. 15 December 2014

During the Ebola-crisis 2014, states have widely ignored the measures recommended by the World Health Organization (WHO) and have interfered in the fight against the disease. This blogpost suggests ways to address shortcomings in states’ adherence to the law.

Globalization facilitates the worldwide spread of diseases. Recently, Ebola throughout Western Africa, and Zika in Latin America and the Caribbean gave rise to fears in countries far removed from the affected region. The international community relies on the World Health Organization (WHO) to combat diseases. The WHO is tasked to attain the highest possible level of health for all peoples (art. 1 WHO-Constitution). Even tough law itself does not make anyone healthier, the WHO has some legal means at hand to work in that direction. While some means at hand are rather common or even unexciting , WHO-law provides one very unique feature: the WHO has the authority to issue legally binding regulations (art. 21 WHO-Constitution). The kicker is the entry-into-force: A convention adopted under this provision enters into force for all members after due notice has been given of its adoption (art. 22 WHO-Constitution). The only way for a state to opt out of such a binding agreement is to notify the Director-General of WHO of the state’s rejection or its reservation.

This is the legal basis for the International Health Regulations of 2005 (IHR), which entered into force in 2007. Their purpose is to “prevent, protect against, control and provide” a response to any “public health emergency of international concern” (art. 2 IHR, PHEIC). The IHR are guided by the thought to “avoid unnecessary interference with international traffic and trade.”

Ebola in 2014  as well as Zika in 2016 were both regarded as PHEIC: they were understood as extraordinary events which constitute a public health risk to other States through the international spread of diseases and potentially require a coordinated international response (art. 1 IHR).

Taking the straight-forward-approach: Modifying the IHR

The easiest way is, obviously, to modify the IHR. Only one single word needs to be chopped: Art. 1 IHR could be modified to the extent that temporary recommendations are defined as “binding” measures. In light of recent state practice this approach seems, however, to be out of question. Thus, it is advisable to consider measures less intrusive on state sovereignty.

In general, state parties are not prevented from implementing additional health measures (art. 43 [1] IHR). However, the IHR are very clear: those additional measures may not be more restrictive on international traffic and not more intrusive on persons than reasonably available alternatives which achieve the appropriate level of health protection. If a state wants to adopt additional measures, this state has to provide the WHO with corresponding information. The WHO, in turn, assesses these measures and may request the state to reconsider its plans. If a state plans to adopt measures contrary to temporary recommendations already in place, those measures would contravene the condition set at the end of art. 43 (1). Nevertheless, under international law, those national measures remain in force; the IHR cannot void any national measure. Still, the state is under a treaty obligation to report such measures. Thus, this requirement may nudge the state to adhere to the temporary recommendation. To be perfectly clear: This is in no way a legal enforcement mechanism; it may work for policy reasons only.

Unfortunately, the human right to health has not played any role in the fight against Ebola. It may nevertheless be the most comprehensive approach to use human rights law as a catalyst and ensure compliance with the IHR and temporary recommendations. This approach relies on several pillars. First, art. 12 (1) International Covenant on Economic, Social and Cultural Rights (ICESCR) does not contain a right to perfect health, but it stipulates a somewhat lesser goal to the “enjoyment of the highest attainable standard of physical and mental health”. Art. 12 (2) ICESCR indicates several steps that State parties shall take to achieve full realization of this right. Among those is the state parties’ obligation to refrain from interfering directly or indirectly with this right, and to render international assistance and cooperation. In addition to bilateral and multilateral cooperation trough the WHO, the UN General Assembly is also tasked with promoting international cooperation in the field of health. Especially with PHEICs, international cooperation is key. Without a global effort, the global spread of diseases will not be stopped.

Second, the ICESCR does not contain a provision outlining the applicability ratione loci. One could make the case for applicability only in a State party’s territory. After all, it is difficult enough to provide health care within a State alone. If a State cannot provide perfect health to everyone on its territory, how can a State than achieve this goal abroad?

However, this interpretation falls short of treaty law. After all, art. 2 [1] ICESCR does not explicitly limit the ICESCR’s scope of application. In addition, this provision includes an obligation for providing international assistance and cooperation. By being under a treaty obligation to supply assistance, States may not hamper efforts by other actors to achieve health. Keeping in mind that such measures are taken (and enforced) on the state’s territory, this amounts to an obligation to at least not interfere with temporary recommendations issued by the WHO’s Director-General. To be clear, this does not entail an extraterritorial applicability of the ICESCR but refers to measures taken on the territory of the respective state. Taking such measures would, in contrast, lead to the contrary result because the state is not only not supplying international assistance, but hindering international assistance in the form of WHO-recommended measures.

Given all this, taking the human rights approach is not as easy as it may sound. The obligation to render international assistance is rather weak and may be interpreted in various ways. In addition, art. 2 ICESCR simply does not provide for extraterritorial application and if one opts for the basic approach that such a provision is necessary in order to have extraterritorial jurisdiction, the approach suggested here will not progressively realize the human right to health. If one, however, interprets the lack of any explicit reference to the scope of application as to not limit the ICESCR’s application (in contrast to art. 2 ICCPR), the way forward suggested here may be convincing. Still, the obligation to render international assistance itself is rather weak. Its substance is vague and may be interpreted in many ways.

In short, the obligation to progressively realize the rights enshrined in the ICESCR in cooperation with other States as well as the obligation to assist other States in their endeavor to provide the human right to health are violated by the above-mentioned restrictions taken despite a temporary recommendation to the opposite.

While updating the IHR seems to be futile and taking a winding approach may not meet the target of providing “more health”, a human rights centered approach may be benficial to address the spread of global diseases. After all, the obligation to provide assistance to other States amounts simultaneously to an obligation not to interfere with measures taken by other States or the international community for this purpose.

Robert Frau is senior research associate at the European University Viadrina, Frankfurt (Oder). The above reflections will be published more detailed in the volume covering the workshop, where the role of the Security Council is addresses as well. In addition, the article “Law as an Antidote” will be published in the Göttingen Journal of International Law. 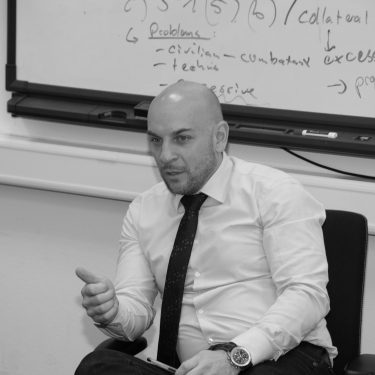