A Missed Opportunity for Accountability?

Corporate Responsibility and the Draft Definition of Ecocide

In June 2021 the Independent Expert Panel for the Legal Definition of Ecocide issued its proposal of the legal definition of ecocide along with its accompanying commentary. With its proposal, the Expert Panel aims to introduce the crime of ecocide into the list of existing international crimes in the Rome Statute (RS) of the International Criminal Court (ICC), namely war crime, crimes against humanity, genocide, and the crime of aggression. The concept of a crime of ecocide has been debated for several decades, each proposal faced several challenges, such as a principle of nullum crimen sine lege whereby the law has to clearly define the material and mental elements of the crime in order for any person to understand what would be considered as a prohibited conduct and could potentially make them criminally liable. Another challenge related to the definition is of jurisdictional nature as several States could potentially have jurisdiction over the same act stretching through different sovereign territories. However, the most controversial challenge related to the contemporary ecocide debate is the role of corporate actors and their possible criminal liability for environmental destruction. While recognizing the role of corporate actors in the potential crime of ecocide, the Expert Panel, excludes them from their proposed ecocide definition. I respectfully disagree with this approach.

Human activities and in particular multinational corporations are at the forefront of global environmental destruction and climate change. Specific sectors such as the oil and gas industry, commonly named “Carbon Majors”, and other corporations driven by the industrialization process and the growing need for natural resources (see here, here and here), are among the main environmental polluters. They are among the most responsible actors for the rapid environmental destruction and climate change, which are having tangible and far reaching negative consequences for humanity. The threat of environmental destruction is a paradigmatic example of a global threat that needs to be addressed through effective international action. As I have previously argued (see here and here), the ICC should have jurisdiction not just over the crime of ecocide, but also over the corporate entities that commit or contribute to crimes under the Court’s jurisdiction.

Conceptually, the Definition of Ecocide Does Not Exclude Corporate Directors

Should the definition be accepted by States, and ecocide be added to the existing list of crimes in the Rome Statute, this would not change the current responsibility regime where the Court has jurisdiction over natural persons only, excluding any legal entities. Under articles 25 and 28 of the Rome Statute, the ICC recognizes individual criminal responsibility for crimes under its jurisdiction. Historically, international criminal law (ICL) continuously recognized that even if a crime is of a collective nature, it is the individuals who are criminally liable, including by directly committing an act, by contributing through an organizational framework or by omission, if they failed to prevent or sanction the committed crime. Today, and since 2002, corporate directors, as the highest-ranking civilian officers, can be held liable before the ICC for the crimes committed by their company, although there have been no cases of prosecution in practice. Arguably, corporate directors, as the highest-ranking civilian officers could potentially be held criminally responsible for the ecocide committed by their company.

Situations may arise before the ICC in which corporations as such could be requested to pay reparations for crimes committed in terms of the existing catalogue of crimes as well as of the potential crime of ecocide. Unlike other international criminal tribunals, the ICC recognizes a victim’s right to reparations to help remedy the damage or harm caused by a criminal act (see art. 75 and 76 RS). Conceptually, individuals responsible for a potential ecocide crime would bear an obligation of reparations if convicted. Under the Rome Statute, a convicted person can bear criminal sanction (art. 76 RS). The Rome Statute, however, separates the issue of reparations from the issue of penalties (art. 77 et seq. RS), thereby clearly expressing that reparation is not punitive in nature. The rules 94(2) and 95(1) of the Rules of Evidence and Procedure (REP) refer to “persons” which are named in the request or identified in the charges’ raised by victims. Both provisions make reference to the “person” without specifying their natural or legal character, which could potentially lead to the corporations being requested to pay reparation in cases where their directors have been convicted for ecocide. However, this is only hypothetical assumption today.

Challenges for the Criminal Prosecution of Corporate Directors

As recognized in the Rome Statute’s preamble, the crimes enumerated under article 5 of the Statute are crimes that are universally accepted to be so egregious as to deeply “shock the conscience of humanity” and “threaten the peace, security and well-being of the world”. Since the creation of the ICC in 2002, there is a growing documentation by various actors that corporations contribute to existing international crimes, even in the situations currently before the ICC. In fact, the role of economic actors in international crimes has been raised in the early communications of the prosecutor. However, to this day, the Court has not prosecuted any corporate director for the “traditional” international crimes, those that are by now well established in international jurisprudence and well-integrated into domestic regimes. It is thus very surprising to see the optimism of the Stop Ecocide foundation when it states that “[a]s soon as a state (or group of states) submits a proposal, we will start to see changes in the way corporations behave.”

In this context, it is highly unlikely that any prosecutor would venture into investigating, potentially prosecuting corporate directors for the new crime, when the notion of ecocide itself would require the Court’s interpretation, at least in initial proceedings. In addition, the interdisciplinary approach to environmental destruction through international environmental law and international criminal law has not been sufficiently explored until this day.

Furthermore, environmental destruction would often involve a complex web of actors (see 2019 Report of the Working Group on the use of mercenaries, para 40) from State authorities, criminal actors and corporate entities, operating from different location and implicating several nationalities. In this web of relationships, legal or illegal, most often opaque between State and corporate actors, identifying the right individual who could be held liable for environmental destruction stretching over several sovereign territories would be an extremely challenging process.

The Need to Include Corporate Responsibility Explicitly in the Rome Statute

In addition, the Court’s budget depends heavily on States’ contributions and requires obtaining sufficient funds to support human resources including appropriate expertise in a wide range of fields from international business to the environment specialists. There are also logistical aspects to consider when investigations concern several jurisdictions affected by ecocide and corporate operations, which would require mutual legal assistance and related expertise in each State. In order to empower the prosecution to investigate corporate directors, the Office of the Prosecutor (OTP) would need to be given all the means it requires to effectively conduct its investigation. This could be achieved by explicit inclusion into the Rome Statute of a provision on corporate responsibility, which would justify such investigative operations.

Only a Partial Response to Environmental Destruction

By addressing only the crime of ecocide and setting aside the issue of corporate responsibility before the ICC, the drafters of the ecocide proposal provide for a partial response to environmental health and stability. To address the existing regulatory dysfunction between international economic law and environmental law favoring the former, a more inclusive and open approach to the relationship between the natural environment – the people and communities – and the law is required. To truly promote the global response to environmental protection, we need to take into consideration a more just international economic order that is respective of people’s rights to land and resources and addresses issues such as mass consumption. For this reason, corporate responsibility cannot be disassociated from ecocide, but should form an integral part of the definition that supports a comprehensive approach to the protection of the environment. All this remains purely hypothetical and it will depend on States how, if at all, they will formulate the crime of ecocide.

Disclosure: The author of this contribution was member of the “Promise Institute Working Group on the use of International Criminal Law to protect the environment” which contributed to the present draft definition. 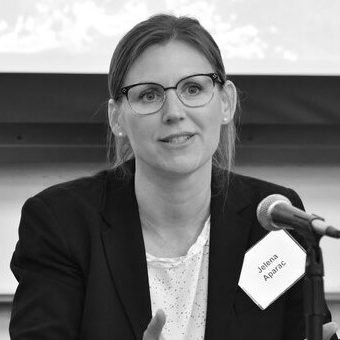 Jelena Aparac is a lecturer, field worker and independent consultant in international human rights and humanitarian law. She is the Chair-Rapporteur of the UN Working Group on the use of mercenaries. Her research focuses on business and human rights in armed conflicts as well as corporate responsibility and environmental crimes.