19:00 -21:00 o'clock
CET
The event will take place in person. A registration is required.
Litigants and defendants in climate litigation heavily rely on science. They usually refer to the Intergovernmental Panel on Climate Change (IPCC) or national scientific advisory bodies. Judges are placed in the position of having to give meaning to legal concepts based on complex science and determine whether and which legal effects can be established.
One prominent issue at the interface of law and science is how much individual states/companies can be obliged to reduce their emissions. How can a state’s/company’s ‘fair share’ be determined? The answer relies on effort sharing methodologies, which all are heavily entangled both with scientific information and normative choices. Another issue of law and science has recently surfaced in the context of criminal proceedings against climate activists. Here, the question is whether the actions of the protestors can or cannot be justified by a ‘state of necessity’, which turns on whether the actions are ‘suitable’ to protect the ‘legal asset’ that they aim to protect (liveable planetary conditions).
I will identify how judges rely on science in various strategic climate litigation cases and draw conclusions as to the transformative effects of the use of science in these cases on the powers of the judiciary.
Christina Eckes is professor of European law at the University of Amsterdam and director of the Amsterdam Centre for European Law and Governance (ACELG). Her current research interests are the separation of powers in 21st century Europe, strategic climate litigation in Europe, and EU external relations. Since 2020, she leads the NORFACE project Separation of powers for 21st century Europe (SepaRope). 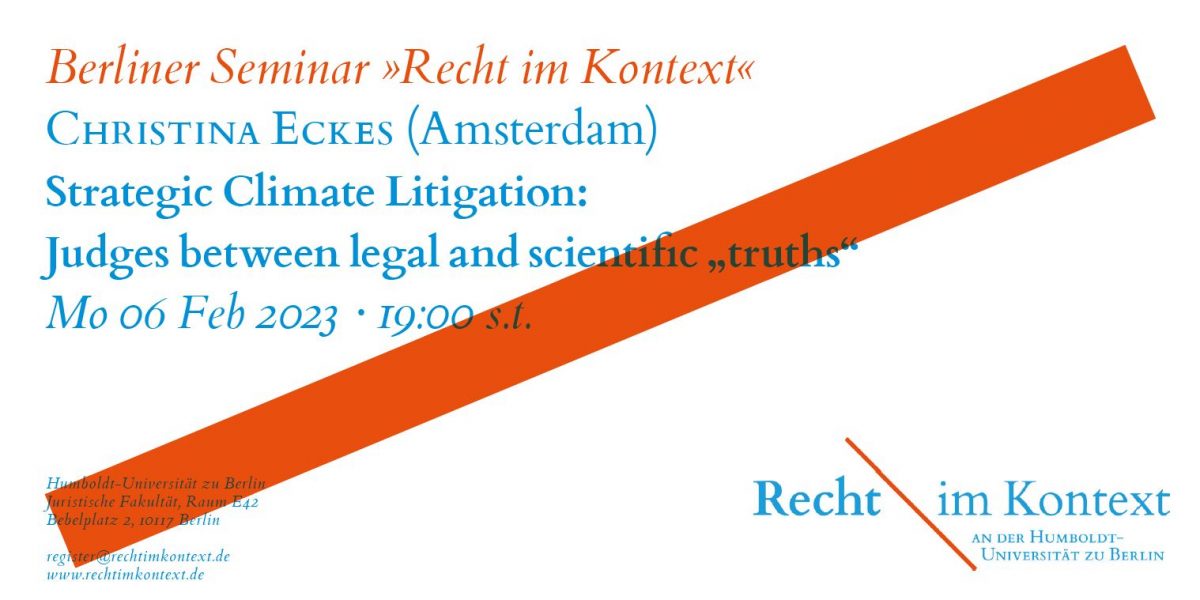 Address
Humboldt-Universität zu Berlin, Juristische Fakultät, Raum BE2 E42
Bebelplatz 2
10117 Berlin
Organizer
Recht im Kontext
Share event
facebook twitter
Advertise your Event
If you want to advertise your event on the blog, please get in touch via:
newsletter@voelkerrechtsblog.org
Subscribe to the Blog
Subscribe to stay informed via e-mail about new posts published on Völkerrechtsblog and enter your e-mail address below.